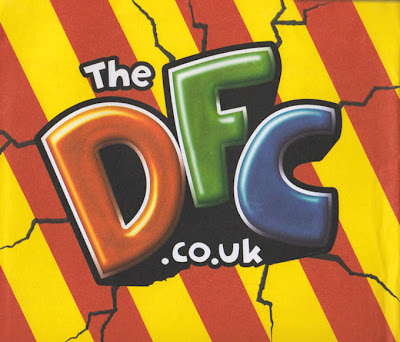 Breaking news over at bleedingcool.com is that The DFC is allegedly returning under a new name, appropriately titled Phoenix.

Full information is still under wraps at present but it sounds like the same contributors will be involved, such as Emma Vieceli, Philip Pullman, Tony Lee... and surely with a comic title like that Woodrow Phoenix has to be on board again as well?

Hopefully Phoenix will have the long-term success that the previous comic deserved. Currently there's no news on whether it will be subscription only like The DFC was, or whether it'll be available on the High Street... or perhaps if it'll be a digital comic. Time will tell!

UPDATE: According to John Freeman's Down the Tubes blog, Phoenix (or rather, The Phoenix apparently) is not a revival of The DFC. "The Phoenix isn't affiliated to David Fickling Books or any other publisher" said Ben Sharpe, former DFC editor.

So, a new comic with the same editor as The DFC which held a party to announce the new comic, attended by many ex-DFC contributors, and allegedly also involving Will Fickling who was previously involved with The DFC. Other than that, not a revival of The DFC.

Email ThisBlogThis!Share to TwitterShare to FacebookShare to Pinterest
Labels: Phoenix, The DFC

I honestly prefer the name DFC to Pheonix but hey, the DFC's back and that;s what's important! :D

Any idea when it will return?

I've no idea Harry, sorry. All I know is what I've read on the bleedingcool report but I thought readers of this blog would be interested in hearing it too. No doubt we'll hear more soon.

That's brilliant news! If it's anything like as good as the last incarnation I'll definitely be subscribing.

Am I the only person who didn't mourn the passing of the original DFC? It's ultimate failing was it's poorly executed business model and lack of good PR outside of the already-in-the-know comics industry. This wasn't helped by some of it's comics which i can only describe as being smug, middle class and boring (I'm looking at you Crab Lane Crew!)

I'll be interested to see how Phoenix gets over these problems and if it can actually reach out to kids. I think they should be careful about being too sure of themselves given that even the high quality, highly publicised re-launch of the Dandy hasn't exactly set the world alight with it's sales.

There were aspects of The DFC that I found too "middle class" and polite for its own good too, but perhaps that's a good market to aim for these days? I dunno. I grew up on a council estate reading Wham! and Smash! with strips that I imagine would be considered too brash and vulgar for the tastes of The DFC, but if our local shops are anything to go by today's working class kids aren't buying comics, so perhaps the leafy drive kids are the ones to aim for? Time will tell.

Regarding The Dandy, sales are up according to the ABC figures.

Sadly I think sales are up based on the Dandy Xtreme issues that hung around on shelves for a good few weeks before the new Dandy launched. I might be wrong but quite often one issue selling well can have a dramatic impact on ABCs. At any rate the Dandy's decision to start covermounting again and upping it's price points to lack of confidence in the relaunched format.

I think the Dandy is exceptionally good but it worries me that if even they can't attract large numbers of kids maybe no one can? I really don't believe that middle class kids are the new comic readers, I think the problem is that the number of different media all fighting for kids attention is growing all of the time. TV, internet, video games, mobile phones, books. Comics are being squeezed by all of these.

The Dandy's still going though which is a good thing, and the Beano too! Maybe Phoenix will surprise me and be massive but from the sound of it it's heading back to smugsville for more wacky adventures with the Crab Lane Crew and other right on comics.

Yes, I think all publications are struggling to get noticed due to TV/video games,Internet etc. It's not easy. My guess is that Phoenix will be a digital comic, but that's only a guess. I found the DFC's subscription system unreliable so I hope they won't go that route again.

There was something curiously old fashioned about some of The DFC's characters which perhaps didn't go down too well with modern kids but it still had work by Jamie Smart, Laura Howell, Dave Windett and others which had a wider appeal I think.

Anyway, we'll know more if and when they send out information.

PS: The Dandy cover mounts/extra pages were only for two issues to (hopefully) boost sales. It's back to normal this week.

Yes, i agree. I think I may have come across as too negative about the DFC. I really enjoyed jamie Smart and Laura Howell's contributions. They were clever, funny and didn't talk down to their readers.

A lot of publishers are moving into digital now but the big problem with this is that people aren't quite ready to start paying for content yet. I'd be interested to know quite how well The Times pay wall has worked. Are kids at a point where they want to pay for a digital comic? I would guess no.

While I agree that some of the strips were better than others, I didn’t personally get “smug” from any of them. Probably a teensy bit middle class admittedly, but do kids really care about class politics?

For all the occasional patchy strips, I found it really exciting (and a bit intimidating) to find out that there’s still so much cartooning talent in the UK.

Like the name. Now it sounds like a comic instead of part of a fast food chain. I was part of the leafy lane middle class lot that really did enjoy Smash and Wham and later on Shiver & Shake, and Action and I think middle class and working class kids would enjoy a story if it's got lots to look at and is fun, exciting and edgy to read.

With the DFC being only available by subscription and the fairly hefty cover price (ok, maybe comparing it to 2000AD prog 1 at 8p isn't fair) I would think it was middle class parents they were aiming at. Not to mention that it was trailed in the Guardian.

I hope that most of the stories come back. It had barely scraped the start of the Phillip Pullman story. Spider Moon, Mezolith, Mirabilis and Mo-Bot High deserve another outing, although I feel it would be hard to start a new comic with stories that have already been published, or not starting from the beginning.

probebly sadly, but i can't say i have heard of DFC.. must have pass me by some how or be too modern for me.. but Woodrow Phoenix's name i know.. but i got the feeling i should know it for more.. All i know him as is a good artist that drew Sonic the Comic Issue 2 'Robo-Fox' story and Issue 3 'Lost in the Labyrith Zone' story (both featuring the Robo-fox armour and being writen by then great Mark Millar (No offense.. but since he has taken up american comics, i'm not a big fan of his work).. Oh and he possibily draw issue 13's Cover, but i'm not sure about that..

Anyway.. Did i miss out on DFC or something?

DFC Wasn't exactly well publicised if you didn't read The Guardian or British comic forums XD. It was mainly only available by 'mail order' (or e-subscription but it amounts to the same thing) though some issues were sold in Tesco's.

The Pheonix will be available in a paper (aka proper) version, though probably digital too. According to a lady in the know! She also says it's funded by a group of parents who were sad to see the DFC go, so i imagine a lot of the content will be similar. I understand many of the DFC's characters were creator-owned, so they can re-appear if said creators want them to!

Also Mirabilis is going to be published in book form by Media Publications, who are creating Strip Magazine.

I felt the promotion for The DFC was perhaps too subtle in The Guardian at times. Sure, the three pages of strip were there but the plug for the actual comic was tiny, so people may not have associated the strips as part of a bigger publication.