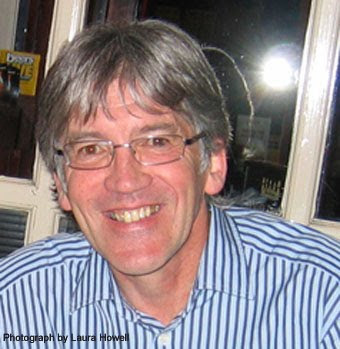 Alan Digby, who has been doing a fine job as editor of The Beano and Beano Max these past few years, has taken early retirement from D.C. Thomson after 40 years with the company.

Alan joined D.C. Thomson in 1970, becoming chief sub-editor on The Beano where he masterminded the famous 'Gnasher Goes Missing' story arc as well as the creation of Ivy the Terrible with artist Robert Nixon. (Ivy was based on one of Alan's daughters.) 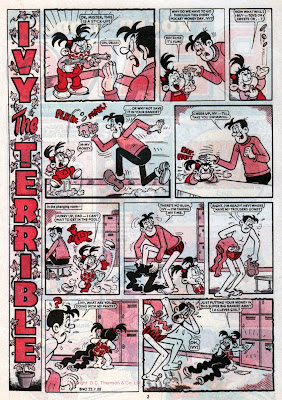 In the late 1980s Alan became editor of The Beezer before moving on to head the Comics Projects department launching the popular hardback The Broons and Oor Wullie compilations and the Funsize titles.

Alan became editor of The Beano in 2006, replacing Euan Kerr, and also took over BeanoMAX the following year. The new editor is Michael Stirling, deputy head of childrens entertainment at D.C. Thomson.

On a personal note, it was a pleasure to work with Alan on the development of his Ultras concept, which became the Super School strip debuting in The Beano in October 2008. The strip became part of the new look given to the weekly at that time which proved to be successful with the readers. 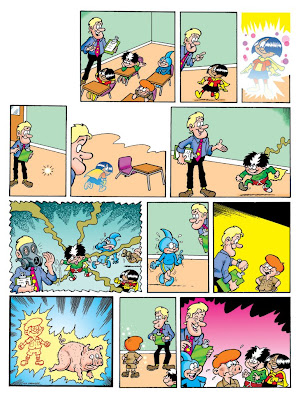 These are hard times for publications, but in the last five years Alan has managed to steer The Beano on course, tweaking the long-running weekly to bring it more up to date whilst retaining its unique identity. My very best wishes to him for a long and happy retirement.

40 years is very impressive and hope Alan has a good retirement..

Of course loved his writing for Dennis the Menace and many other strips which I've read..loved Gnasher going missing story..and Ivy..plus Beezer and Topper comic
also great seeing new artists ariving like yourself and Laura and others..

With a new editor it will be interesting what new things will happen next..which always happens..

I wonder who will take over...
Maybe it's good that there'll be a new editor... The comic needs a good kick up the backside to match up with Dandy standards, maybe a new editor is just the answer... Who knows, new editor, new, great ideas... :)
But still, sad to see him go... :(

According to press reports Michael Stirling is the new editor Harry. He's been with the company for a while so The Beano should be in good hands.

Yes, I think all of us who have worked for Alan are sad to see him go. Forty years is an impressive record and a proud achievement editing (and writing) comics that have cheered up millions of kids.

Well good luck to him he's done a fantastic job. I have to admit I thought Ivy the Terrible was older than that, lovely that she's based on one of his daughters, nice little story. Hope Michael Stirling keeps the quality going, without resorting to copying The Dandy (not that I'm implying Harry Rickard wants this), even though that's a huge success and I love it (bought every issue so far), I think the Beano easily holds it's own against it at the moment. Not to preclude any change obviously, change can be good everything needs to evolve to compete. But The Beano is the Beano and The Dandy is the Dandy.

As far as my seven-year-old son is concerned The Beano Rules and it's taken quite a lot to get him into the Dandy. It may be that we live in France and he doesn't get all the TV personality references, I have to say personally it could do with toning that aspect down a little.

Anyway I digress, good luck to Alan and thanks for a wonderful job. And I hope you're well Lew, I've been enjoying Postman Prat I must say.

Who was it who said that everyone rises to their incompetence threshold? I'm sorry, but Alan may well have been a brilliant writer and a masterful story planner and subeditor, but he was a lousy editor. Practically everything which is wrong with today's Beano (political correctness, bad design, stagnant character roster [Super School notwithstanding]) can be traced back to a point after 2006.

Before then, new characters were introduced regularly, there was a yearly Comic Idol contest (which came to an abrupt halt in 2006), and there was much less of a 'good, clean, parent-friendly fun', as opposed to 'fun and laughs for kids', attitude to the comic than now.

Regarding the latter point, without a doubt the best example is a message which appeared on the club pages in (I think) early 2010, sincerely and excruciatingly apologising for having dared have the temerity to print a picture of Dennis ice-skating on a frozen pond. Yes, really. That was a yearly depiction before 2006. Just because something's printed in a comic doesn't mean kids will go out and try it, as Lew has been particularly vocal in pointing out.

Sorry 'Swirlythingy' but I completely disagree with you. Any "political correctness" in The Beano was not of Alan's creation, but of outside influences. Any editor would have done the same, and indeed has done. (Back in the days of Sonic the Comic I had a character leap out of a window and a HUGE warning was added to the scene by the editor.)

Today's editors have to walk a fine line on how much can be portrayed in children's comics. Upset a parent, (who in turn could complain to the retailer or the media) and you risk the comic being pulled from the shelves.

Blame our prudish, over-sensitive society for "political correctness" in comics, not the editors who have to work under such restrictions. It's the "comics might influence children" mindset that has created this. Obviously the influence of the Dennis and Gnasher cartoon was also a factor that took the edge off the Dennis the Menace strip somewhat, but again this was out of Alan's hands.

Keeping irate parents sweet or dropping a story you like doesn't make anyone a "lousy editor". Editors have more input than is immediately visible on the page. Alan worked for the company for 40 years. Hardly the record of someone who was incompetent. Take it from people who have worked with him. He was a good editor.

Well, this comment obviously isn't getting past the evil crash demons, so read it here:

"swirlythingy", I don't have the time to go through every piece of the critique you posted on that forum but it boils down to this: you're blaming Alan Digby for everything from political correctness to changing the paper stock and the price increases. None of those things have ANYTHING to do with the editor! Decisions such as paper stock and price are made by other departments. As for him changing the "redskin" gag for the reprint, yes ten years on society IS more sensitive about things such as that. You can't blame the editor for a change in society.

You make comparisons to ACTION of 35 years ago. Yes, society HAS become more over-sensitive since then, and retailers have more clout now on what can and cannot be displayed in a comic. (Which is why Panini won't reprint the more violent Marvel US strips.)

I know you only want The Beano to be a good comic, and I appreciate how passionate you and the other forum people are about it, but blaming the editor for changes that he had no control over is misdirected.

Everyone involved in comics, including the editors, want them to be as good as they can be. You might not like some of their decisions, and some decisions are imposed upon them, but nit-picking over the contents on a forum isn't going to make any difference.

Just how mean spirited is Swirlythingly? You write a nice tribute to Alan Digby and instead of wishing the man well on his retirement Swirlythingy uses it to call him incompetent.

The Beano brings pleasure to lots of children including my niece and nephew. I hope Mr.Digby is enjoying his well earned retirement free from spiteful critics.

Found this blog entry after trying to google to see if there really was a footballer named Alan Digby - Minnie the Minx's favourite player as seen the Beano Book 1985 :)