The comics from the Amalgamated Press always tried to pack their publications with festive imagery and this No.1,771 of Film Fun dated December 26th 1953 was no exception. You'll notice that by this time Chips had merged into the comic, but in name only. The characters from Illustrated Chips died with the title and never transferred to Film Fun. Imagine the fanrage if the Internet had been around then!

Regular favourites Laurel & Hardy appeared on the front and back covers, drawn by Terry Wakefield. 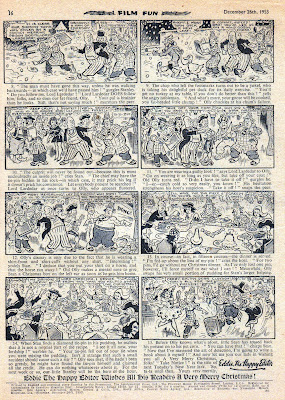 Inside, Frank Randle in a typical British comic plot about misunderstandings... 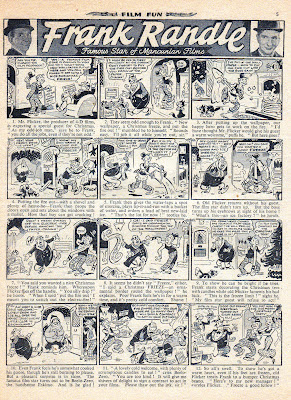 The Red Skelton strip contains some marvelous imagery that sets it in its early Fifties era. Look at that TV set, the stove, and the old-style kitchen sink... 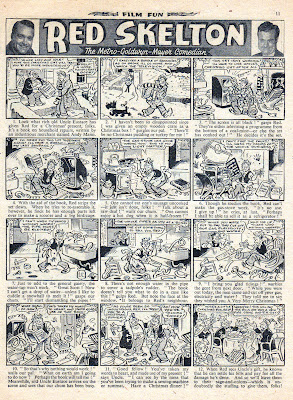 Like most pre-1960s comics, Film Fun also contained numerous text pages (which no doubt some modern critics would describe as "filler" these days). Here's a Mirth-Makers Club story. Note the little ad for that year's Film Fun Annual in the corner. Only 6 shillings (30p). 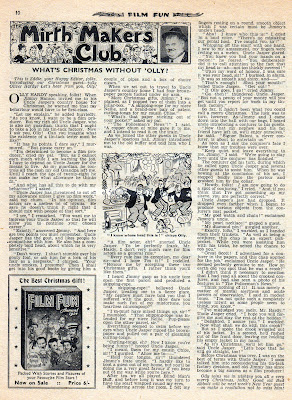 George Formby also showed some artifacts of the time, when you could buy a sofa for £95 and (only in comic land I would think) an old car for a fiver! 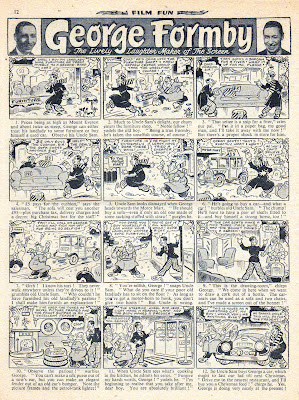 Another dip into the Comics Time Vortex soon. What year will be the next stop?

The Reg Parlett style is so elegant and economic. One of these must be by him. I remember he was in his 80's when I told Bob Paynter how much I admired him. I think it was Harry's Haunted House that prompted it. I'm not sure if I wrote anything for Reg, but I bet Mark (Rodgers) did.

I'm sure I've seen anecdotes in classic car magazines about people in the 40's and 50's buying 20's and 30's cars for single figures... usually not very good ones, requiring the bodges of the day (like riveting patches of metal over rusty spots, doesn't matter what metal, just any scrap bit you could find XD).
Still I was also recently reading the November issue of The Captain from 1899, where a very rich man boasts that a brand new motor-car cost him "well into three figures"!

notice that there's only one image of george formby's face - a profile that is sometimes reversed.
it's used in nearly every panel!

i think there was a full face shot too in other strips.

was that laziness...or a way of ensuring that george would always be depicted in an approved way?

I don't think they asked celebrities for approval in those days. Some of the Film Fun strips were reprints from earlier issues with a different star's head pasted onto the artwork. It's possible that Formby strip was one of those.