Strip Magazine 2 on its way 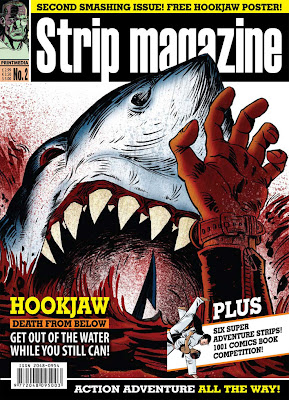 The publication of the second issue of Britain's new adventure monthly Strip Magazine, previously announced as being December 1st, has been rescheduled to December 14th according to the official blog.

"Due to a small but unexpected delivery delay from Bosnia, [where the comic is printed] the print edition will not be on sale until 14th December, for which we apologize" said editor John Freeman.

However, the good news (for those with an iPad or iPhone) is that the digital edition of Strip Magazine No.2 is now on sale from iTunes.

For more details of the contents of issue two, see the Strip Magazine blog:
http://stripcomicmagazineuk.blogspot.com/2011/12/strip-magazine-2-digital-edition-on.html

I wondered where it had got to.So now its every 6 weeks like Clint?Ok so by my acalulations #3 will be with us on 25th Jan?

No, it's still monthly, but delays at customs have been a problem.

Unfortunately, as usually happens on the Internet, there are comments and speculations from people that, frankly, don't know the facts. The ONLY reliable source regarding Strip Magazine's schedule are the official websites and Facebook pages.

Hi Lew, I'm still awaiting the arrival of Issue 1 from my local comic shop. I ordered it in early October, but despite my weekly reminders it still hasn't turned up.

I'm thinking of ordering it direct from the publisher, but have a feeling I may have left it too late! Any advice would be gratefully received.
Cheers,
Dave

I think they should still have issues left. It may be worth contacting them directly via the website or blog.

My LCS ordered direct for issue 1 and are still waiting for their issues. Shame, but not going to stop me buying it when it finally gets here.

I saw a single issue of Strip in my LCS which vanished after a week and there's no sign of further supplies.

Sadly this feels familiar. A few years ago I always ordered Crikey! through my LCS because I felt that I needed to support local business. Had a pretty poor service - never received a single issue - was always told that it was late, even when Borders had copies in stock. I eventually ordered 6 to 9 from the publisher and subscribed - though not in time to stop the magazine folding.

There's a lot of talk on the Internet that digital is a threat to the small LCS. Frankly, the local comic shops lost my sympathy when they stopped supporting the small press and started hiding the comics behind action figures and collectable card games. Either we're all in this together or we're not.

I'd advise anyone having trouble finding copies to subscribe and do it now.

I understand some comic shops still stock small press comics. (Nostalgia & Comics did the last time I was there, and Gosh! had some.) Forbidden Planet hasn't for a long time. (FP Coventry refused to take my Yampy Tales No.3 back in 1996, despite it having a full colour cover and that I'd been a professional artist for 13 years by that time. Even on S.O.R!) Ironic, considering the owner of FP started out doing a fanzine.

That said, STRIP MAGAZINE isn't small press. Forbidden Planet are stocking it. I bought mine from the Coventry branch, which had a healthy stack of them in.

Just to be clear, I don't blame my LCS, they ordered Strip well in advance direct from the publisher, and have plenty of Print Media's hardbacks. Unfortunately, they've not been sent Strip 1 despite regularly chasing it up. I'll just chalk it up to issues of having an overseas publisher, and hope it gets sorted soon. They've ordered from Diamond for issue 2 onwards and I hope that fixes things. I worked in a comic shop so have a bit of sympathy towards them, and because of geography I know they are not spinning me a line and claiming 'delays', they're genuinely trying.

I understand that although Diamond received their shipment OK, the shipment to the UK publisher was delayed, so that'd account for why your LCS didn't receive theirs. I hope it's sorted out now though.

All in all I think Strip #1 has done remarkably well considering that some major websites haven't reviewed it. (And certain bloggers who are known to claim the UK industry is dead have ignored it as well, oddly enough.)

Yes, my LCS kept me up to date with what was going on, but I gave up pestering to see it had arrived and have not been in for a week or so (no new Mudman or Snarked to pick up!), so it's possible that it could be in now, ready and waiting for me!