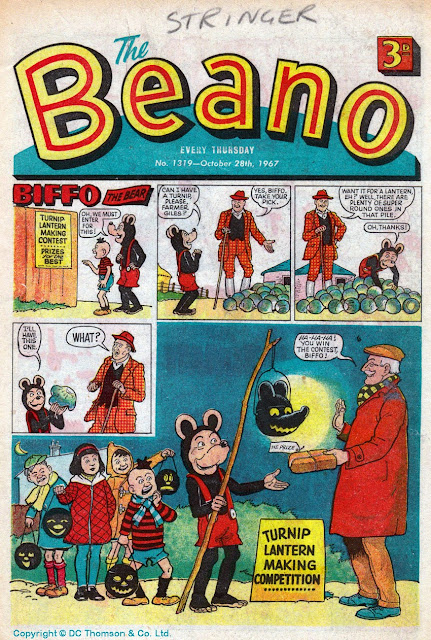 The celebration of Halloween as a commercial venture is relatively new to the UK, only really taking hold over the last 20 years or so. These days you'll find a whole aisle in supermarkets taken up with Halloween merchandise. This wasn't the case years ago, and Halloween was a very low key affair. All you needed was a turnip and a piece of string.

Comics didn't celebrate Halloween at all back in the 1960s but there would sometimes be one or two strips at the end of October that would touch upon it. Here's the cover to The Beano No.1319 (October 28th 1967) by the great Dudley D. Watkins showing Biffo the Bear and his pals and their 'turnip lanterns'. Yes, in Britain it was the tradition for turnips to be carved out, not pumpkins! So, if you can't get hold of a pumpkin today, or the shops are charging too much, buy a cheap turnip instead and revive the old tradition.

(Yes, that's the actual copy I had 46 years ago. I had The Beano reserved at my newsagent every week, which is why he wrote my name on the top.)
Posted by Lew Stringer at 11:58

...And it's just like you've never been gone! More of the same, please!

Hallowe'en was always a bit of a bigger deal north of the border in the UK, (in fact it was Scottish & Irish immigrants who took all those traditions to America in the first place), so it's probably not too surprising that D.C. Thomson should be the ones to have a Hallowe'en story on their front cover.

I've got an Oor Wullie collection somewhere with a wartime story in which Wullie and his pals go 'guising' as Hitler, Mussolini and the like.

Interesting info, Malcolm, thanks. I remember kids having carved-out turnips here in Warwickshire too, in the 1960s. And tin can lanterns with holes punctured in.

I have to agree with Malcolm, I grew up guising in the North of Scotland in the early 80s and I'm sure the Beano used to make reference to it in at least one strip per year.

Popularity in England does seem to have come via the States though - including changing the door to door part's name to "trick or treating" and replacing neeps with pumpkins.

Sadly this popularity has filtered back up North and the kids have abandoned a lot of our traditions.