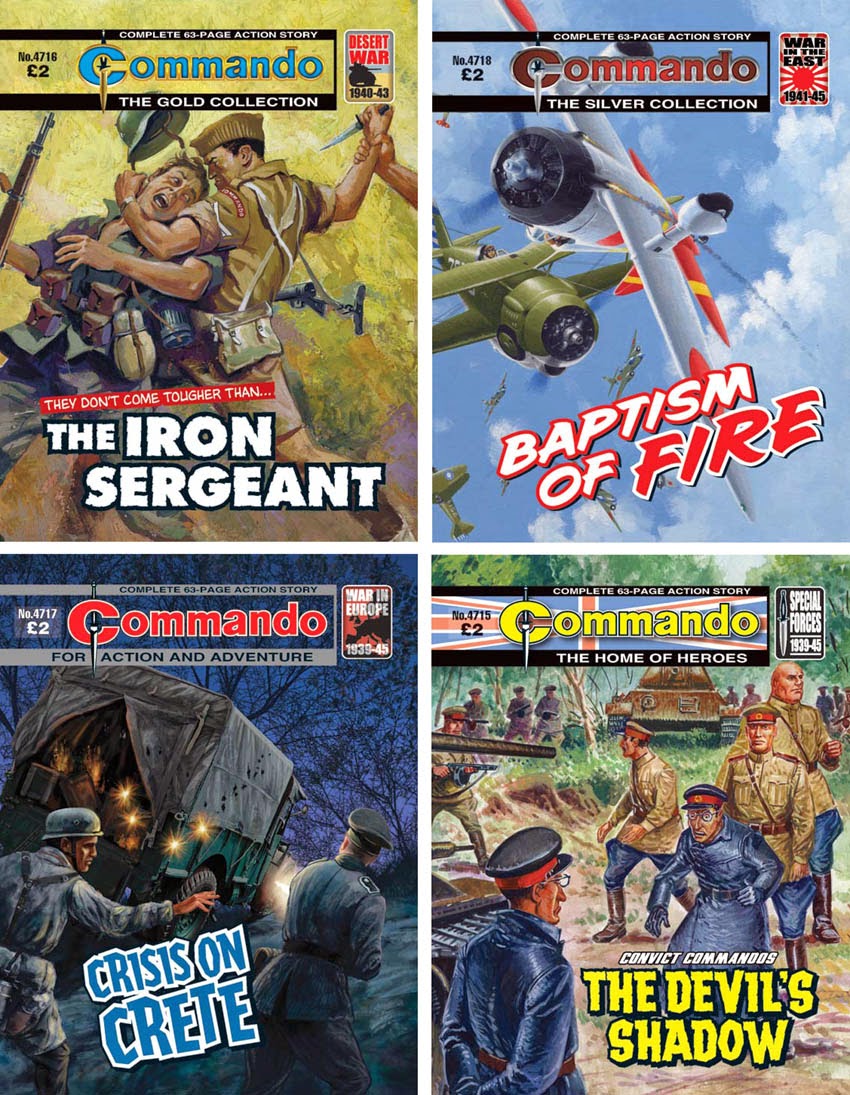 Commando No 4715 – The Devil’s Shadow
Without peering into a mirror, it's not often you find yourself looking at your double, but that's what the quivering Jelly Jakes of the Convict Commandos was doing. He didn't like it one bit, especially as the man facing him was backed with four T34 tanks and about 20 heavily-armed Soviet infantrymen.
To make matters just that little bit worse, the man whose face he was staring at was justly known as...
The Devil's Shadow

Commando No 4716 – The Iron Sergeant
When a task was “impossible” — a mission so dangerous that it looked like certain death — the army sent for Trouble Squad. And the man who led this bunch of hard cases was the toughest of them all — Sergeant “Rocky” Flint. He’d trained them, forged them into fighting machines who could force-march twenty miles in three hours, go three days in the desert on a cup of water, and then take on a force of Germans outnumbering them by three to one and smash them to a pulp!
They didn’t call Flint “The Iron Sergeant” for nothing!

Victor De La Fuente, from whose flowing pen this story’s illustrations come, was undoubtedly on of war comics’ star turns. This is his first Commando story and it’s a cracker. His style is still developing but all the trademark movement is there. As is the magnificent figure and face work that would become his stock-in trade. Victor illustrated almost 50 Commandos between 1964 and 1972 (his brothers also drew for us) and they are rightly held in high regard.
The no-holds-barred script by Parsons is just as mighty and that cover! Wow! The restraining hand is almost lost in the blur of action.
A really well crafted tale all round.
You can read more about Victor De La Fuente here:
http://www.theguardian.com/books/2010/aug/03/victor-de-la-fuente-obituary

Commando No 4717 – Crisis On Crete
Private Dan Vaughn was a bit of a layabout. He didn’t particularly like soldiering and his mate, Private Ian Hicks, was constantly nagging at him to make an effort.
On Crete in 1941, they had a simple task, to transport some ammo in a Bedford truck. But —after an encounter with a low-flying enemy glider — Dan found himself in the middle of a battle, one involving Cretan partisans, crack German paratroopers and the SS.
Lying about was no longer an option if Dan wanted to stay alive!

Commando No 4718 – Baptism Of Fire
As boys they had hated the sight of each other, and now they were rivals to command the same RAF fighter squadron. One was a regular officer who knew all the right people…the other was an “upstart”, but he had been blooded against an enemy who gave no quarter.
Either one might end up in charge, but what neither could forget was that in war all the peace-time rules go out the window…survival becomes the name of the game.

Foremost, a Commando should be a good (fictional) read.
However, it’s a welcome bonus when readers tell us that they learned something too. For example, Ian Kennedy’s stunning cover features a Curtiss Hawk aircraft flying in the colours of the Chinese Air Force. Our British hero serves in an International Squadron, and he’s hot on the tail of a Japanese Claude fighter.
Although the story is imagined, it has an air of historical and military authenticity which we also certainly strive for…but not at the expense of a good yarn.

http://www.commandocomics.com/collection/issue-4718-baptism-of-fire
Posted by Lew Stringer at 01:00