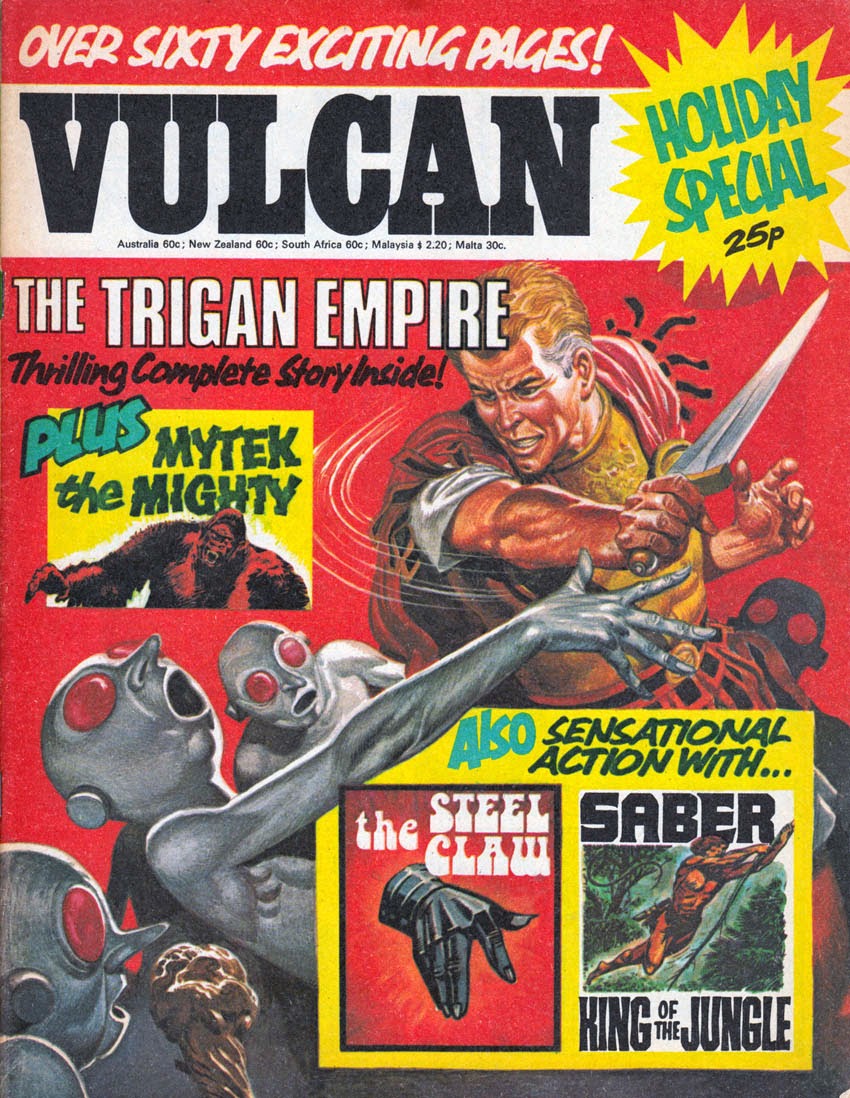 As noted in the previous blog post about Vulcan weekly, it only had a relatively short run (30 issues in Scotland, then 28 nationwide). However, after its demise, IPC still felt confident enough to publish a Vulcan Holiday Special in the summer of 1976.

The thing that's immediately evident is that the design and layout of the Holiday Special is a big improvement on the weekly. It's highly likely it was packaged by a different art editor. I would venture that if the weekly had looked as dynamic and exciting as this it might have lasted a bit longer.

Inside, the Special reprints stories of The Steel Claw, The House of Dolmann, Mytek the Mighty, Robot Archie, and Saber: King of the Jungle. All are edited versions to one degree or another of serials from Valiant, Lion, and Tiger, but again the design and any resizing is a step up on that which we'd seen in Vulcan weekly.

The highlight of the issue is a brand new six page Trigan Empire prose story, accompanied by new artwork by Don Lawrence (who also illustrated the cover). Click to enlarge.. 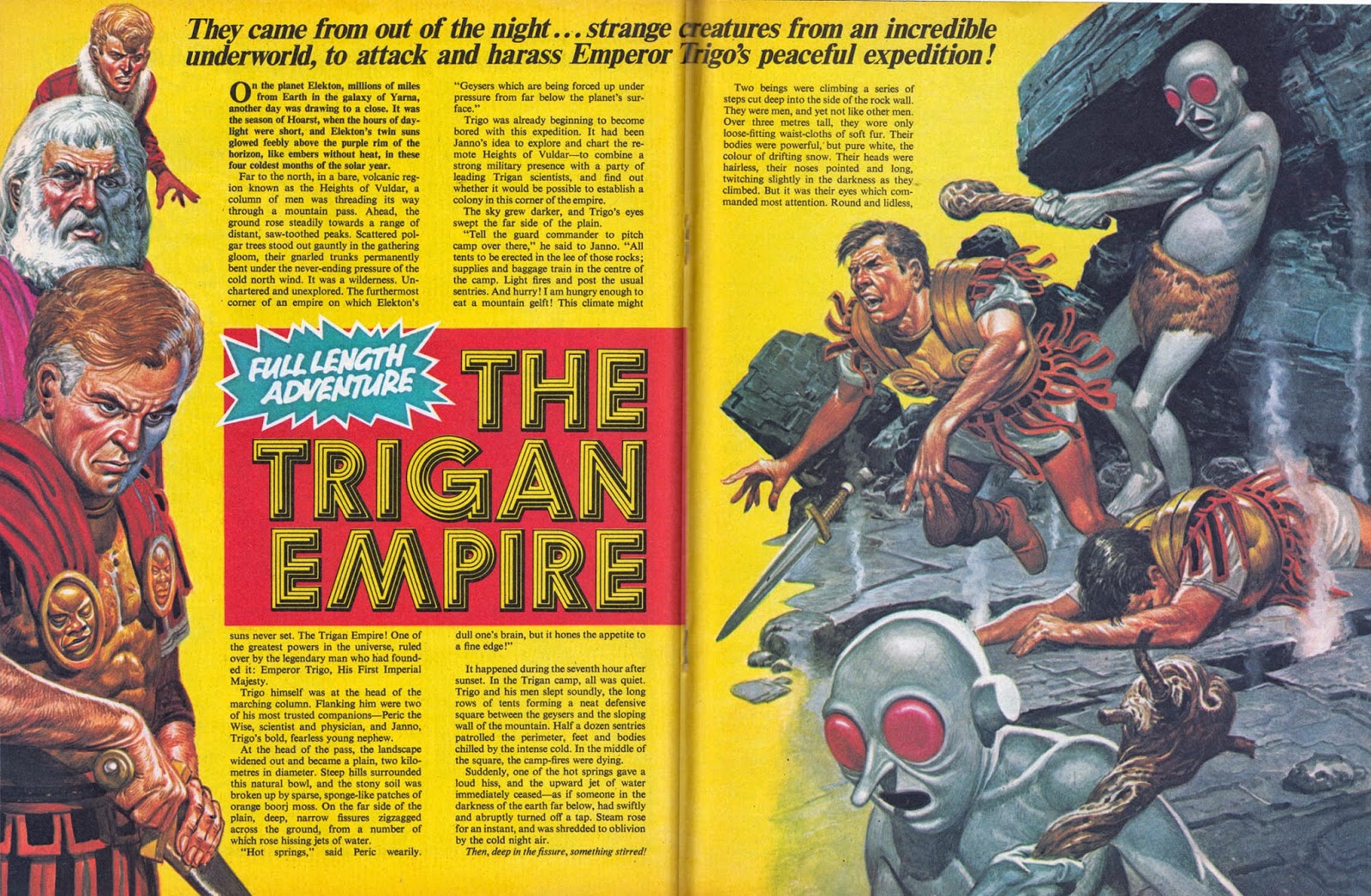 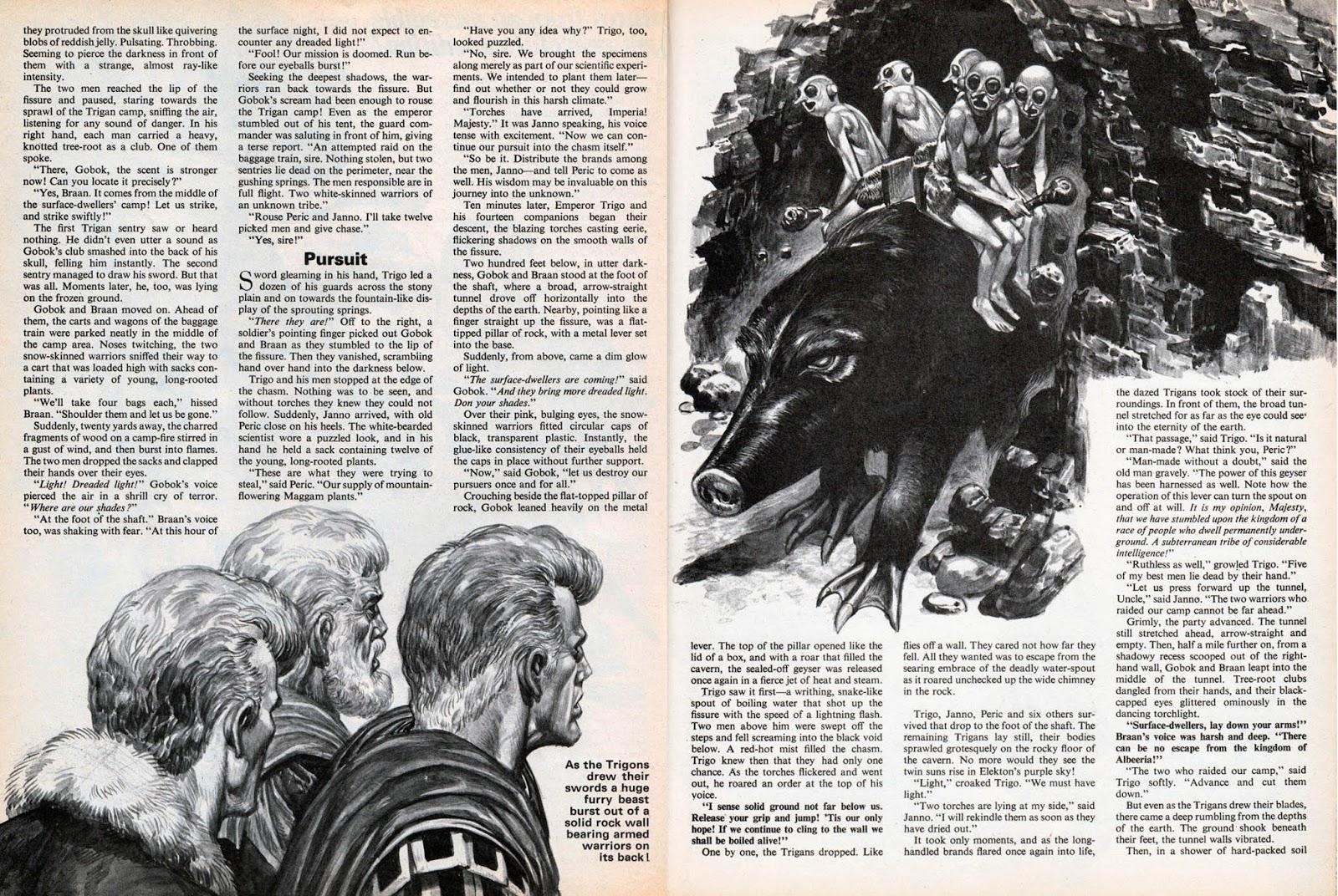 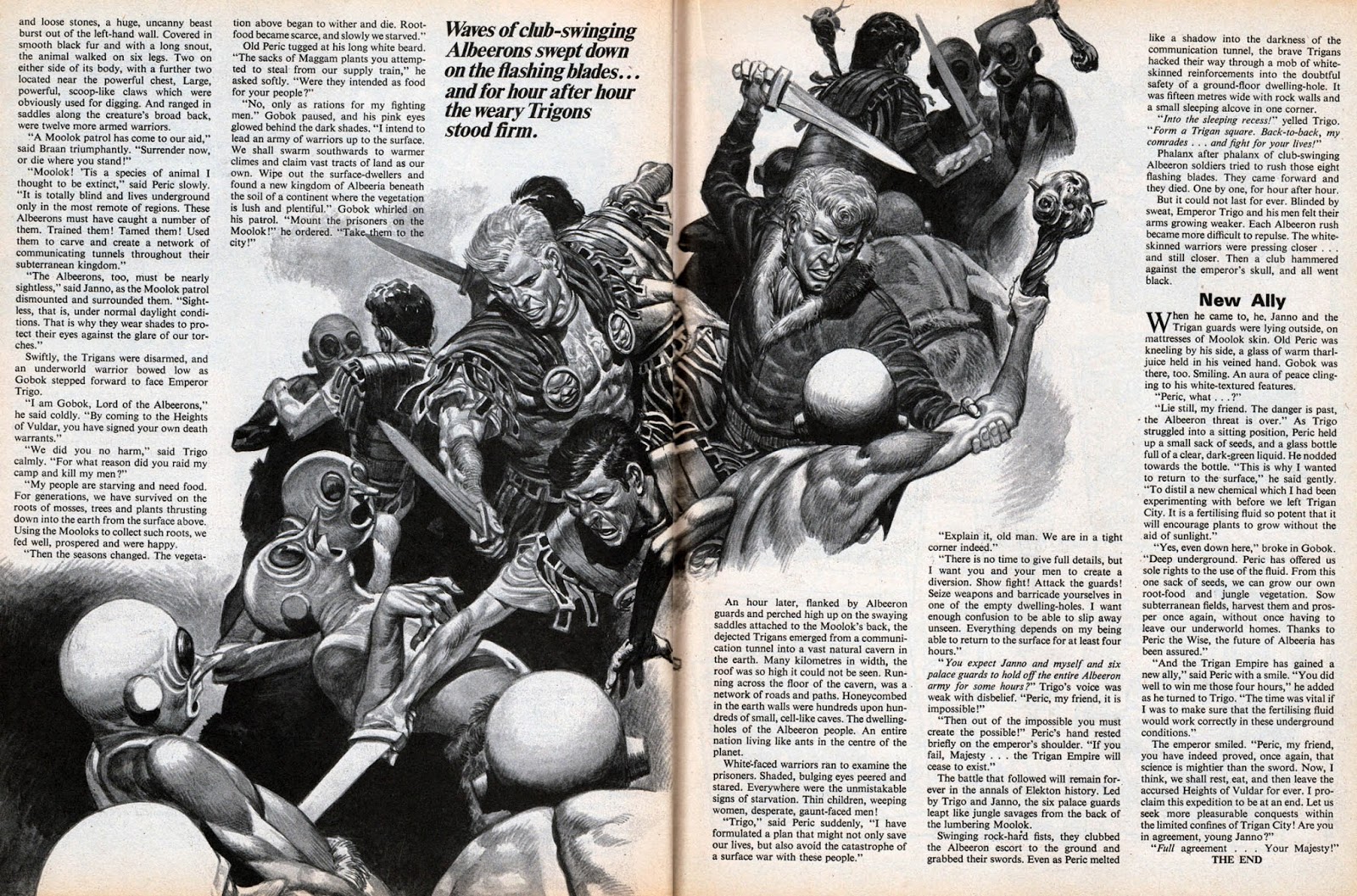 There's also a couple of Sporty humour strips by Reg Wooton. These would have originally appeared in either Knockout or Valiant. 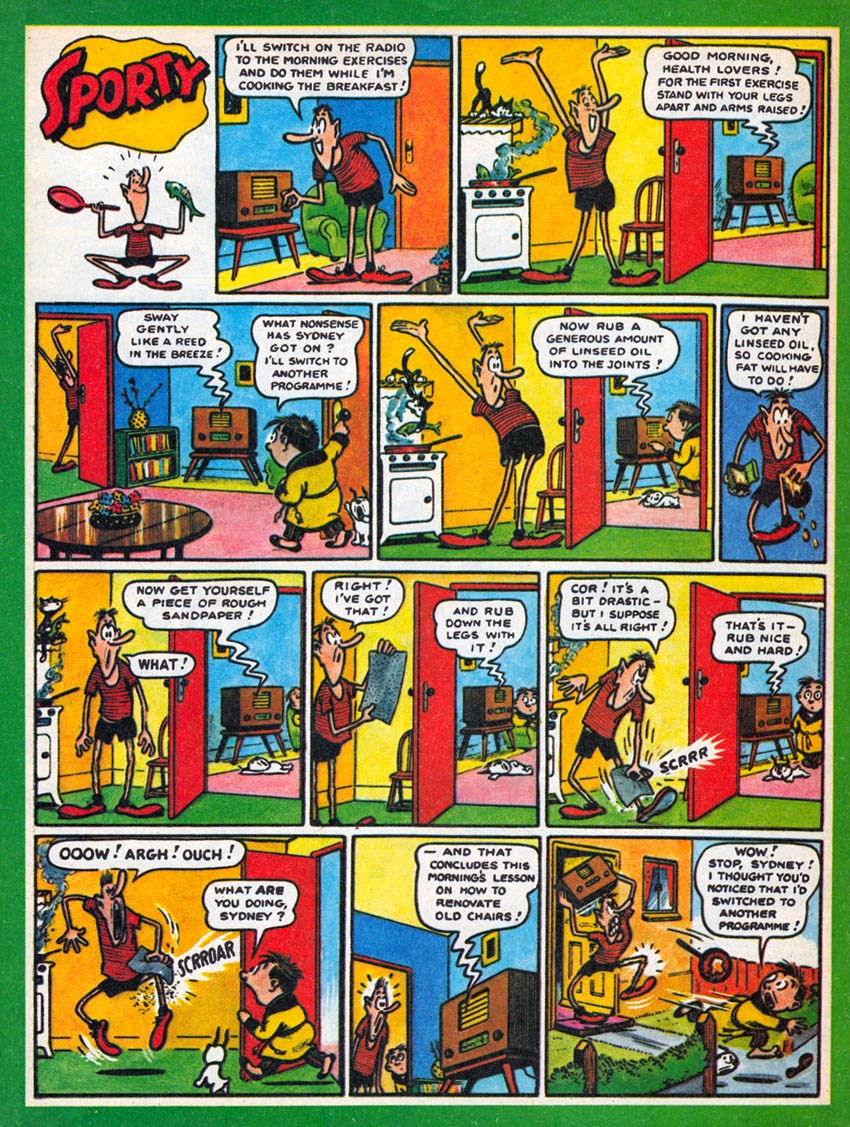 All in all, this one-and-only Vulcan Holiday Special is a great read and worth tracking down on eBay or wherever. Admittedly the Steel Claw story they chose to reprint isn't one of the best, and isn't by Jesus Blasco the regular artist, but the rest of the comic is good stuff.

There was also a one-off Vulcan Annual published that year and I'll take a look at that another time.
Posted by Lew Stringer at 00:01

Ooops - I should have guessed you were saving the Holiday Special and Annual for follow-up posts!

The amazing thing is that Don Lawrence's work for IPC appears to have slowed down to a trickle during the mid-1970s, even as they were reprinting great chunks of his old art in titles like the weekly Vulcan. Presumably it was a disagreement over royalty payments for this material that led to his resignation from the Trigan Empire strip during the last few years of Look & Learn. For such an accomplished artist the rejection of his one-and-only cover for 2000AD on the grounds that he 'couldn't get the figure of Judge Dredd right' must have seemed like the ultimate snub!

Fortunately Dutch publishers proved to have a much more enlightened opinion of his talents so that Britain's loss proved to be Holland's gain.

I didn't know Don Lawrence had even submitted anything to 2000AD so thanks for that info Phil. By the mid 1970s the new wave of artists had a brasher, quirkier, more 'hyper' style, so perhaps it would have been better if DL had been offered a new strip rather than asking him to draw a character not really suited to his style. Ah well, too late now.

I think the Europeans have always been more accepting of sophisticated illustrative comics so DL would be a natural.

They did a summer special? I never knew that! I agree it looks very exciting. The rich colours just pop! Where is Kelly's Eye? The Spider? Are they not in it?

Yeah Don Lawrence did draw a cover for 200OAD but to be fair to IPC the story is not quite what it seems Phil. Legend had it that they pasted a copy of a Carlos Ezquerra drawn Judge Dredd over Don Lawrence's version of Judge Dredd when in fact Don didn't actually draw Dredd on his cover instead he drew an old lady watering alien heads (like plants) all can be revealed on the link below to the original art (although I would have published anything Don Lawrence drew:

Interesting! Thanks Paul. Hmm, nice art but not a strong 2000AD cover is it? Understandable they'd want Dredd on the cover instead as the comic was still establishing itself, and was still aimed at children then. You'd think they'd have used it as a pin up though rather than leaving it unpublished. It would have made a great cover for Misty!

Patrick, no Tim Kelly or Spider in the Special unfortunately. Perhaps there just wasn't room.

That's fascinating! Thanks for the link Paul - I've always wondered what Don's original cover looked like. From what I can remember most 2000AD covers during that period featured general SF/Fantasy scenarios rather than continuing characters so I don't think the old lady would have been too out of place. Perhaps Pat Mills decided it lacked the necessary testosterone appeal for the target audience? Oddly enough it would have probably been just right for Misty. Incidentally it's noticeable that somebody has done a first rate job in adding extra heads in Don's style for the published version (assuming he wasn't asked to draw them himself - in which case, maybe he did try his hand at a Dredd overlay when the watering can idea was originally nixed - before they decided to go with an Ezquerra paste-up instead).

I can't help feeling it'd be a shame if the oft-repeated legend about him drawing a rejected version of Dredd proved to be a complete fabrication as I'd really love to see what that might have looked like!

I love that 'Steel Claw' page you put up, Lew, with the old boxong glove thingy smacking Louis Crandell in the mush. How expensive would that be to construct in reality?

Yes, that's what put me off some IPC adventure strips when their internal logic went haywire. Hard to believe The Steel Claw started out as a much darker series before becoming as daft as that in it's later years. Thankfully the second run, "Return of The Claw" was an improvement.

It's intriguing how many of Fleetway's 'heroes' started out with a darker image. The Steel Claw and the Spider were both crooks, Mytek was under the control of an evil dwarf, and even the story of the Trigan Empire began with the premise that it had just fallen in some mysterious way.

And let's not even mention Charlie Peace!

Very true Phil. Personally I found the characters much more interesting when they were the threat. I think they later tried to excuse Crandell's dark behaviour on the grounds of the lab accident altering his personality, but in the first episode he was shown to be a resentful, devious sort before that happened!

I've long wondered if there was a shift in editorial policy to lighten up the comics when IPC took over because the stories in general seemed more tense and serious in the early 1960s. Of course it could just be a response to the preferences of their audience who were gradually shifting to a younger demographic.

I did once toy with a 'Whatever Happened to the Steel Claw' scenario in which we learn that Louis Crandell had always suffered from a split personality - and that the Shadow Squad subsequently implanted a subconscious trigger in his brain so they could use his dark side for 'black ops' (when you think about it his invisibility and weaponized claw would make him an almost perfect assassin!).

Needless to say the 'good' Crandell was completely oblivious to this so that when he finally discovers the truth it sets him on a violent collision course with his former employers à la The Bourne Identity.

Sounds good! Coincidentally Marvel Comics have since done that exact story with the Winter Soldier who, strangely enough, has his own 'steel claw'.

I had forgotten than many Fleetway /IPC characters started out with darker sides. A big favourite of mine was the strip called "Return of the White Eyes" and the baddie Ezra Creech - I would love to track down some issue of the "Lion" to read them again

I have some of those strips, Paul. I'll show a few on this blog next week if I get the chance.