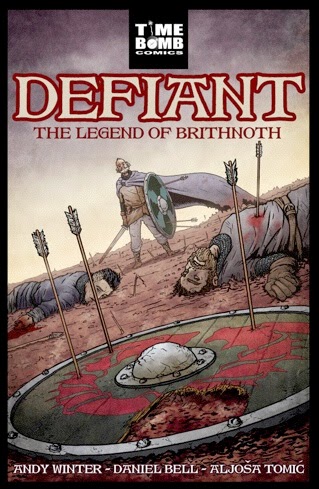 Time Bomb Comics is a successful British independent comics company who publish originated one-shot comics and graphic novels. Here's the news on their latest title which is available to order through your local comic speciality store now for publication in July. You'll find it listed in the latest Diamond Previews catalogue in the UK section.

August 10, 991AD, and a fleet of Viking longships containing 3000 men sail up the River Pant in Essex to the fortified town of Maldon.  Led by the king of Denmark the Norsemen aim to ransack the town and kill as many inhabitants as they can.

Brithnoth, an old soldier and one of the most powerful men in England, assembles a small army and prepares to stand defiant against the coming onslaught.

Defiant: The Legend Of Brithnoth is a hard-hitting historical adventure based on true events that continue to cause furious debate more than a thousand years later! 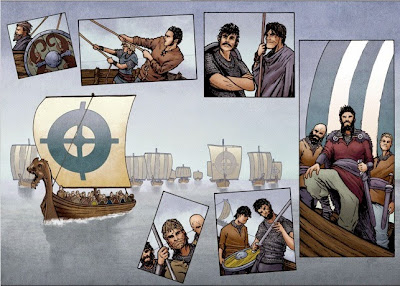 For more information on Time Bomb Comics check out their website:
http://www.timebombcomics.com/
Posted by Lew Stringer at 22:56

That looks interesting Lew, another on the list to pick up!. Over the last few years I have read some English Myth and Legend, Its all new to me and I love it! We are spoilt in these Isles with the huge amount of these tales there is to draw on.

Yes, this is the sort of thing that British comics used to do so well but which is hardly touched upon now.