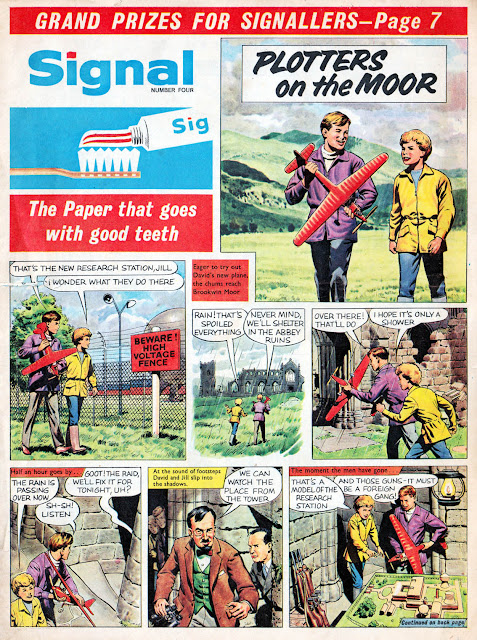 It's always good to discover comics you've never heard of before and the case in point is this one I bought on eBay last week. Signal was an 8 page comic, printed Photogravure like Eagle and TV21 (but smaller) and used to promote Signal toothpaste. I've no idea how many issues were produced but this is No.4. 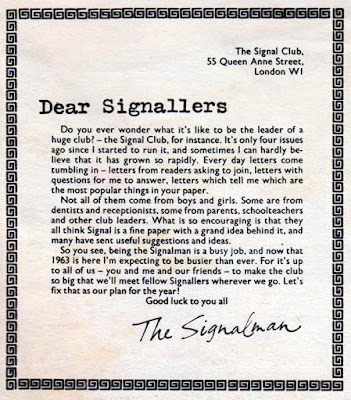 There's no price on the cover, or date, so I'm presuming it was given free to children at their local dentist. It was published by Newman Neame Ltd in association with Foote, Cone and Belding Ltd of London. The design reminds me of Odhams' comics of the same period so I'm wondering if it was packaged by them for the publishers. The content has a mixture of strips and features, and the quality was high. Here's a few examples.

The strip on the front and back covers, Plotters on the Moor, is a traditional yarn of kids foiling a "foreign gang" who presumably plan to sabotage a research station. There are no creator credits, but the artwork looks like one of the Dan Dare studio artists. Perhaps Eric Eden or Don Harley? 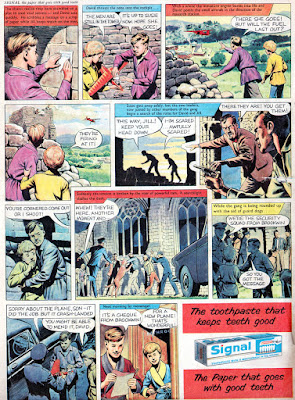 Inside, Castle Glorious and The White Knight is also uncredited (as are all the strips in the comic). The style looks familiar. Perhaps Pat Williams or John Canning? 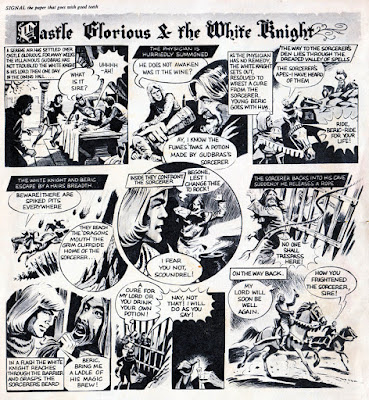 Gordon Glue shows us how to make "The Signal Calendar". Seems a lot of effort. 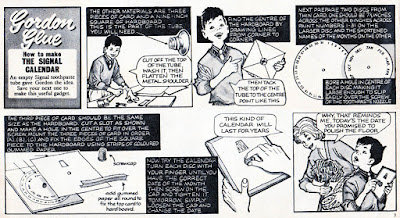 The centrespread is very Eagle-like, with a humour strip Little Ruth by the unmistakable John Ryan (creator of Captain Pugwash), a feature on Telstar, and a mini educational strip. 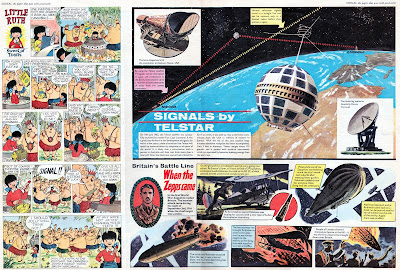 As comics were so popular with children in the 1960s it made sense for companies to use them for promotional items such as this. Gibbs, the manufacturers of Signal toothpaste, also had another comic, Arrow, which I covered in a previous blog post here:
http://lewstringer.blogspot.co.uk/2012/03/comic-oddities-arrow.html

There is so little on this kind of comic around and it always interesting. It's like sweet packages that used to have comic strips or stories, mostly very simple way to sell there products but I find them interesting.. Like Space Raiders with Astra and her Rebel pirates who went around giving creatures KP Snaps Space Raiders Corn Snacks during the 80s and 90s.. Then you got all the Lucky Bag comics etc.. some nice stuff, or at least interesting stuff, around.

Thanks so much for sharing Lew. I checked and it isn't April 1st so that does look interesting! The front cover story needs some help though! Perhaps it could have been called "An adventure to get your teeth into!"
Norman

I'd say the lead strip was Don Harley and the Castle Glorious strip is Pat Williams. The Zeppelin strip looks like Williams' work too.

I've now acquired an issue of #1, so expect to see that on my blog (https://boysadventurecomics.blogspot.com/) soon.

Thanks to Lew for alerting me to the existence of this comic in the first place, cheers! Richard.

Glad to be of service, Richard! It's always a pleasure to find obscure comics like this. Especially when they're of such good quality.