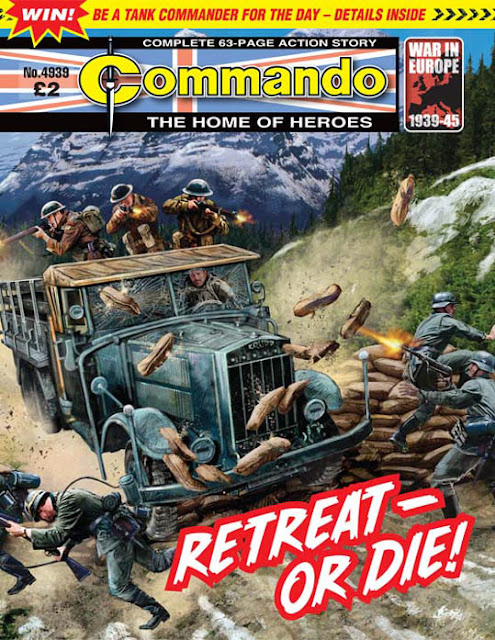 Another four issues of Britain's longest-running adventure comic Commando hit the stands this week. Here's the info just in, direct from D.C. Thomson...

Commando No 4939 – Retreat-Or Die!
Staff Sergeant Sid Charlton was a born soldier, tough and resolute. Caught up in the Allied retreat from Norway in 1940, he and his men were determined to live to fight the Germans another day — but they were cut off from the most direct route to the coast.
Led by an intelligent but inexperienced young officer, Lieutenant John Barclay, they had to take a dangerous detour through hostile territory. Commandeering a stolen enemy truck, the retreat was on…

Commando No 4940 – Flying Flea
When war came to the island of Silau, south east of New Guinea, the pilots of a Royal Australian Air Force squadron laughed at two freakish-looking planes already operating there.
“Pop” Onslow and his son, Willie, ran an air-freight business which used an ancient Vickers Virginia bomber and an odd little crate called a “Flying Flea” — the Aussies reckoned it looked like a motor bike with wings.
When Willie took the Flea into the air and ran rings around the latest Tomahawk fighter the RAAF men considered letting the plucky civilians join the war effort.

Introduction
The little machine at the heart of the late Ken Barr’s wonderful cover is, of course, a real aircraft and not some kind of artistic license on our behalf. Created by Frenchman Henri Mignet, his HM14 was known colloquially as the ‘Flying Flea’ because of the translation of its nickname, ‘Pou du Ciel’ — literally ‘Louse of the Sky’.
I think it’s fantastic when Commando features these real life curios and it is even better when they practically become characters in their own right — and that’s certainly the case here.
Scott Montgomery, Deputy Editor
Flying Flea, originally Commando No 235, (November 1966), re-issued as No 911 (February 1975)

Commando No 4941 – Ram Raiders
It was a daring tactic known as the “Taran” — using an aircraft as an aerial battering ram. Major Ilya Bezkhov of the Russian Air Force had used it on several occasions and lived to tell the tale.
When the Royal Air Force took on a mission to deliver four Tomahawk fighter-bombers to the Russians, Squadron Leader Peter Deacon clashed with Bezkhov, whom he viewed as unhinged — a danger to himself and everyone else around him.
However, Bezkhov saw the interfering Englishman as a coward. Could they work together to defeat the might of the German Luftwaffe?

Commando No 4942 – Kill Me If You Can!
It was only a bone, white and shiny, with odd painting and carving on it. An Aborigine mystic had said it would protect the wearer from any harm.
Well, if you’re an infantryman fighting in a modern war, you aren’t going to believe in that kind of thing, are you? Unless, of course, it starts saving your life — then you might begin to think there was something in it after all!

Introduction:
Geography is, naturally enough, hugely important in Commando. Every tale must have a proper sense of place — the authors and, especially, the artists must evoke each location realistically enough to convince readers of the story’s authenticity and create a sense of drama and atmosphere. Here the dense jungles of New Guinea are brilliantly brought to life by interior artist Dalfiume and cover illustrator Ian Kennedy.
And, this fortnight’s Gold collection classic, Flying Flea (No 4940), is also set in the Far Eastern grandeur of New Guinea’s truly impressive landscape. That book is well worth a read too if you haven’t already done so.
Scott Montgomery, Deputy Editor
Kill Me If You Can! Originally Commando No 1110 (March 1977), re-issued as No 2444 (February 1991)

I've seen "Flying Fleas" in museums and they do look like something built in a shed. Anybody who flew one is brave to the point of lunacy.