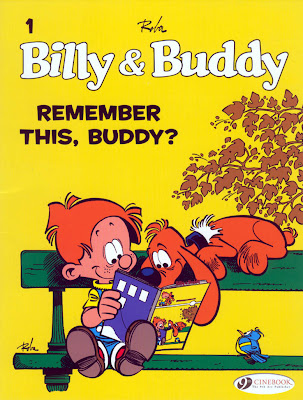 Did you know that a 1960s strip from legendary UK weekly Valiant was recently collected in a 48 page full colour softback book?

Last year Cinebook added another title to their growing line of excellent European comics translated into English with the publication of book one of Billy & Buddy (volume title: Remember This, Buddy?). The strip is an English language adaptation of long-running Belgian strip Boule et Bill, created by cartoonist Roba in 1959, about a boy named Boule and his cocker-spaniel Bill. It originally ran in Spirou and has been collected into over 30 albums for Europe. 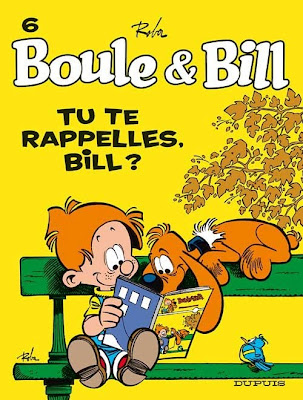 However, this isn't the first time Boule et Bill has been translated for the British market. In the mid-1960s it appeared on the back page of Fleetway's Valiant under the title It's A Dog's Life.

In the modern day Billy & Buddy British collection, Boule is renamed Billy, and Bill has become Buddy. Back in the days of Valiant, Boule became Pete, and Bill became Larry.

Nevertheless, these are exactly the same strips that some of us read back in the Sixties...well, almost. The 1960s translations differ considerably to the 2009 versions. Here's a few examples to compare... 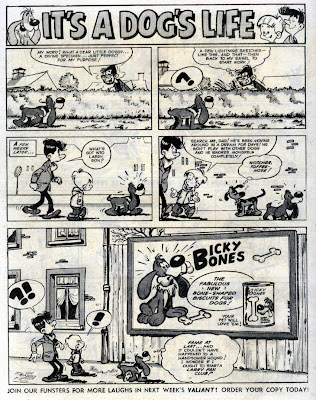 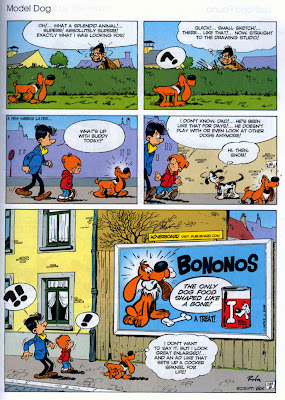 The first thing you'll notice, apart from the lack of colour (which Valiant dropped from its back page in 1965 to save money), is that the 1960s translations have a more colloquial British slant to the dialogue than the modern version. I would imagine the 2009 translations are actually closer to the Belgian originals but the Valiant versions do seem more naturalistic in a way.

Although both versions follow the same gags, the one from Valiant in this strip with the people from the animal protection group ends better because the punchline is in the dialogue, not distanced in a footnote as in the recent version... 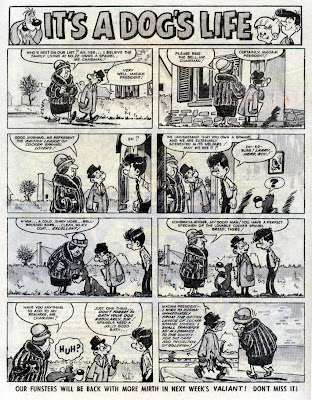 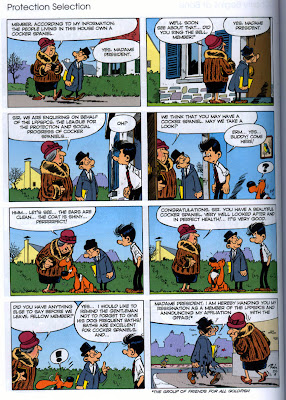 Sometimes though, less is more. The 1965 Valiant version is too verbose here... 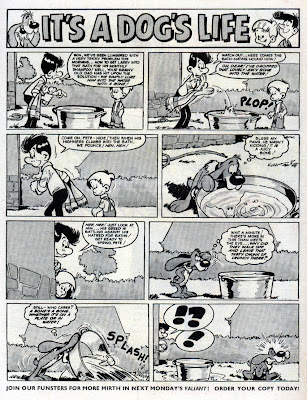 ...but the modern translation gets to the point quicker and therefore moves the strip along faster... 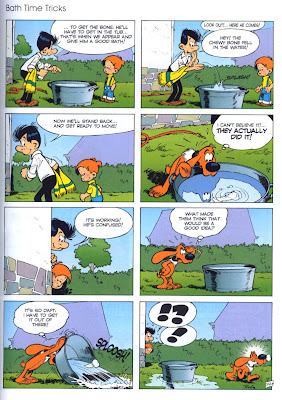 When the strip appeared in Valiant, other little changes were also made, such as redrawing the European policemen as British Bobbies... 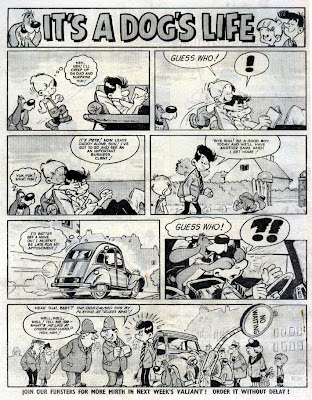 ...a change that wasn't considered necessary for the modern version, presumably because Billy & Buddy is also sold in the USA and because UK police don't all wear helmets now... 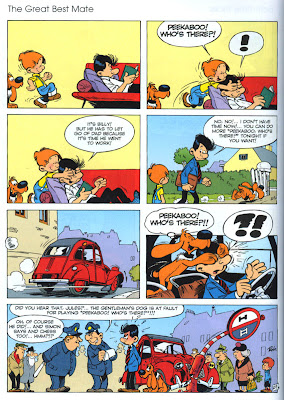 Basically, both UK versions work for the eras they've appeared in and it's a pretty timeless strip. I remember this strip fondly from when I was a kid as the artwork seemed so unique to me. (I didn't know it was European back then.) It's good to see it collected by Cinebook. The gentle humour should appeal to anyone who appreciates children's humour strips and the artwork by Roba is first class.

...and the official Boule et Bill website is here:
http://www.bouleetbill.com/ 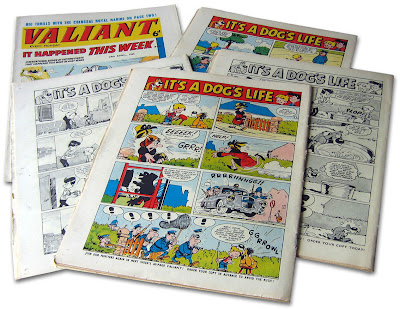 What a wonderful analysis of Billy & Buddy, and its root origins.

I had bought CineBook's Billy & Buddy, and found it real good. But recently when I chanced on few Valiant back copies, I found the 'It's Dog's Life' to be pretty similar to the Billy & Buddy, and the artwork was definitely european and not British. Now I know that my presumption was right, thanks for your article.

Subtle changes look real interesting, says more about the people behind CineBook, who try to put these parameters to modern focus.

Thanks for a nice article, could use this info, when I do a review on this comic (obviously, with credits to you).

A few of the Cinebooks translations have left a little to be desired.

I noticed it most clearly in the two volumes of Beka and Poupard's "Rugger Boys". The translator obviously had no knowledge of rugby and tried to translate the french versions of technical terms directly into english, rather than using the equivalent rigby term.

Still well worth reading though.

As an aside, the Belfast Telegraph are giving away facimiles of british comics this week.

Beginning today with a copy of the Topper.

Yes, I must admit I find some of the translations a bit dry and lacking in punch. Then again perhaps some of the original material isn't really laugh out loud funny. Might be a cultural difference in part. European albums move at a slower pace than the British strips we've grown up with.