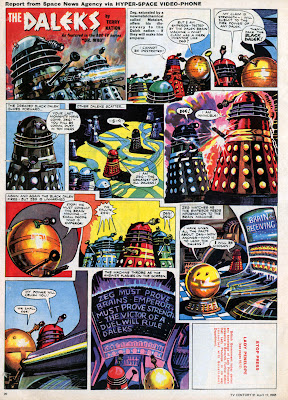 Last night's episode of Doctor Who (Victory of the Daleks) featured a scene with Daleks confronting each other, one of which was a shiny new red Dalek.

Exactly 45 years ago the issue of TV Century 21 on sale that week in 1965 featured a scene with Daleks confronting each other, one of which was a shiny new red Dalek. The issue even bore the cover date April 17th, - and April 17th 2010 is when Victory of the Daleks was broadcast. Spooky! Not so much Doctor Who as Doctor Woooo! 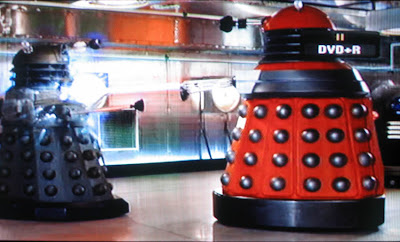 The date is coincidence of course, and the storyline in the strip and the tv series are completely different. However I'm sure that iconic TV21 Dalek confrontation must have influenced either writer Mark Gatiss or the people working on the new series. The Dalek strip has been reprinted several times over the years so it's well known in the Doctor Who fan circles in which the current Who team have their roots. Besides, it's not the first time the comic strip has influenced the tv series, as the design of the Dalek saucer will attest.

At any rate, that TV21 page has always been one of my favourites, particularly the confrontational Dalek vs Dalek image which burned into my mind when I was six. Fantastic to see a similar moment captured on screen exactly 45 years later!

That panel though is quite uncanny though.

Those Dalek strips deserve to be reprinted into a nice book.
I remember reading some of them when Dr Who weekly reprinted some in B&W.

The cynic in me upon seeing all those multi colour Daleks was 'they're only doing that to sell more Dalek toys!'

I don't really like the new design. They look okay(ish) from the front (a bit like a Ron Turner Dalek), but viewed from the side, the head is too small and too far forward. Hunckback Daleks - whatever next?

My first impression was also "Aha! A merchandise strategy."

I also remember that page, reading it on the way to school one morning. TV Century 21 was never quite the same again in my opinion when they finished the Daleks strip.

Incidentally, Reuben, Marvel released a Dalek Special a few years ago (THE DALEK CHRONICLES), reprinting all 104 strips in colour. And Ron Turner illustrated a new six part (I think) Dalek strip, following on where the TV21 one left off, which was printed in DOCTOR WHO MAGAZINE - again, a few years back.