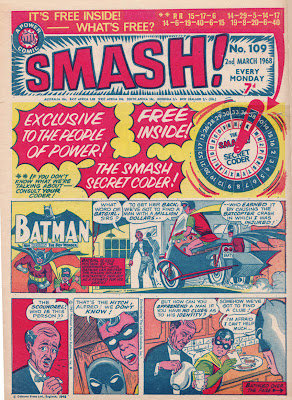 I've been promising to post an item about old free gifts for a long time now so here at last is part one of an occasional series.

Free gifts have been a long established part of British comics almost since the beginning. Today the novelty has lost its value, with most comics now being bagged with multiple gifts every issue. Years ago a free gift was a special treat, reserved for the first three issues of a new comic or for occasional promotions to boost the sales of a comic.

Above are two of the "Broadway Books" given free with the first six issues of D.C. Thomson's new story paper The Skipper in 1930. The two books were printed as one and the reader had to cut across the middle to separate them. Each had 52 pages and was a tiny 4" x 2 3/4" size (10cm x 7cm). The interiors were all in black and white. Here are sample pages from The Broadway Book of Grins and Groans and The Broadway Book of Flying: 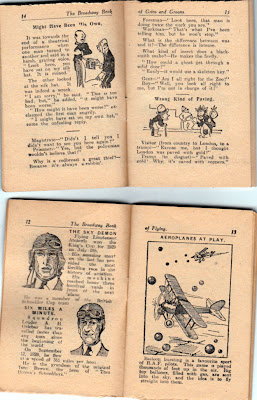 Here's the back cover to the Grins and Groans book. Artwork by Chick Gordon. (Thanks to Ray Moore for the update): 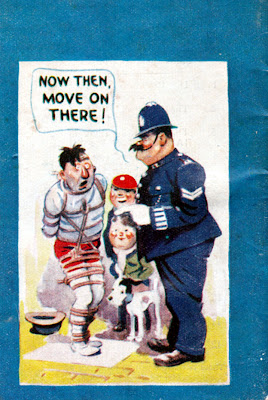 Free gifts back then were certainly more refined than the cheap plastic toys given away today. Issue No.18 of Amalgamated Press' Radio Fun dated February 11th 1939 presented a free Bumper Song Book with 28 pages of sheet music and lyrics to while away the winter nights. 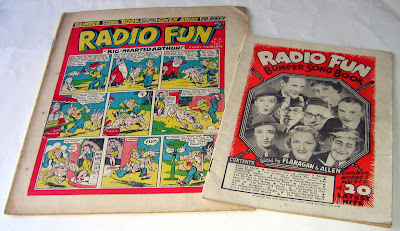 Inside that issue, an advertisement announced that the following week's Radio Fun would be giving away "Amazing Mystifying Magic Spectacles", or 3-D Specs as we know them today: 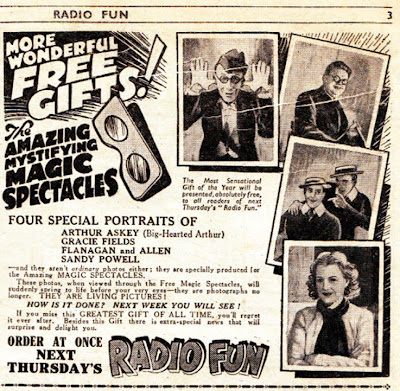 Moving on to 1963 and here's an early version of the Football League Ladders of the type that would later be given away annually with Shoot!

However, as it's six years before Shoot! would be launched, these particular League Ladders were the free gift in Valiant. The same issue that saw the debut of Mytek the Mighty: 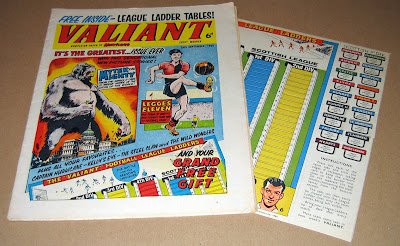 It's 1966 and new Odhams comic Smash! gives away a free jumping frog in its second issue: 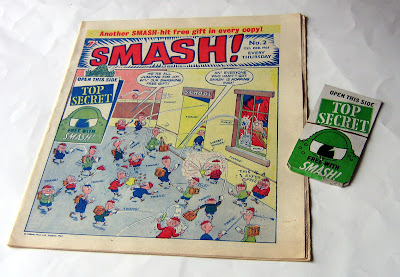 The flat cardboard frog was inside a card envelope which could be set to make the frog spring out. 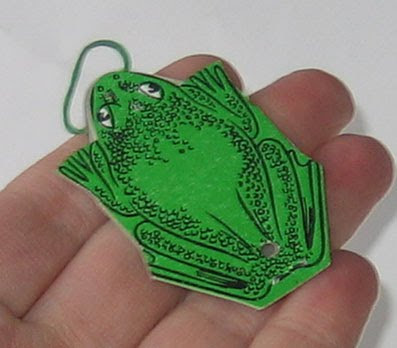 In 1967 Sparky comic was given a revamp and one of the free gifts was Target Tiddleywinks:

A nice cheap but effective free gift, it also featured a Snakes and Ladders game on the bottom of the box:

Sparky was aimed at both sexes but girls' comic Diana wasn't going to mention those smelly boys in its advert for it: 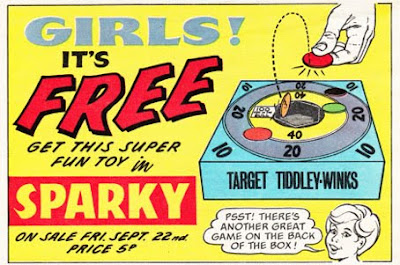 In 1967 the third issue of Pow! gave away this cheap and cheerful game to fire little cardboard haggis into the shed via cardboard bagpipes and a rubber band. Not very sophisticated but good fun all the same. (You'll notice that although the gifts have remained in fairly good condition any rubber bands have tended to perish if more than 40 years old.) 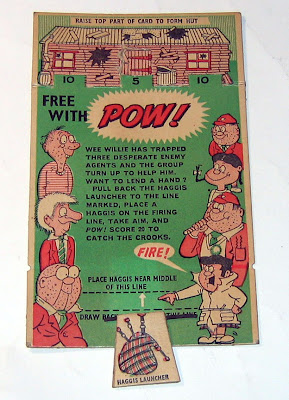 In 1968 Smash! gave away another gift, the Smash! Secret Coder. Notice the brass pin in the centre. Free gifts were often held together by these sharp objects and I don't recall ever being cut by them. Today Health and Safety would insist on a wedge of text warning about the pin, if it allowed it at all. 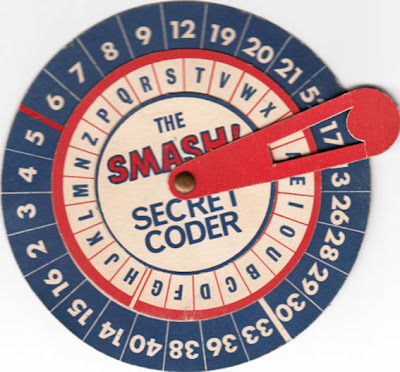 In 1970 D.C. Thomson revived The Wizard and in its second issue gave away a free plastic wallet and the first set of large colour cards for The Great Stars of Football collection. The second set appeared in issue 3. 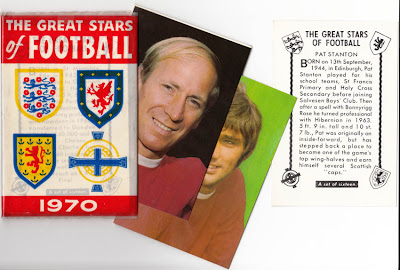 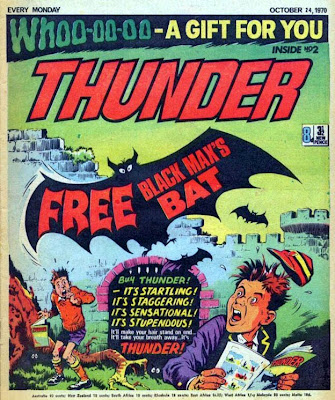 The gift turned out to be a cardboard bat, but its black paper wings did make an authentic bat-like fluttering noise when you swung it around your head from the elastic provided...

...bringing with it the free Dandy Thunder Bang... 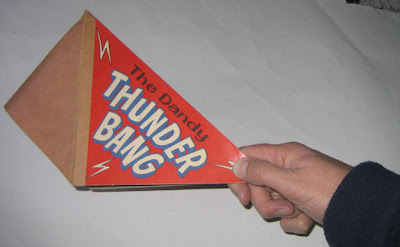 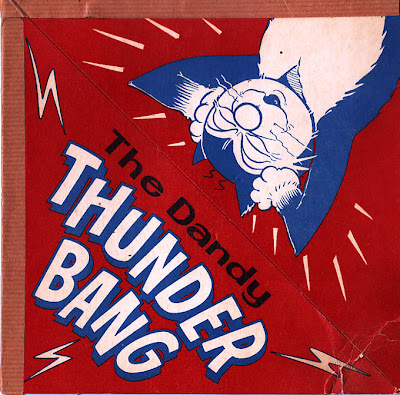 These cardboard and brown paper gifts were very popular indeed and had appeared in D.C. Thomson comics for years... 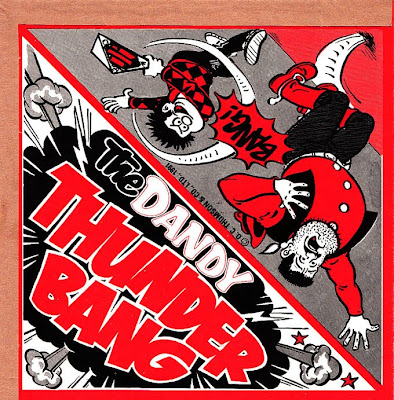 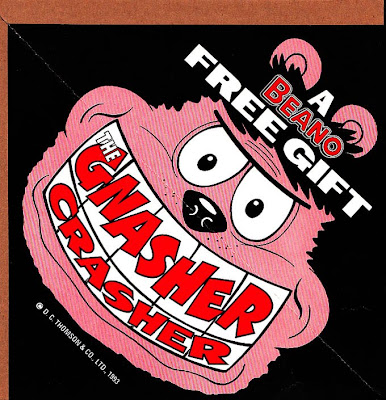 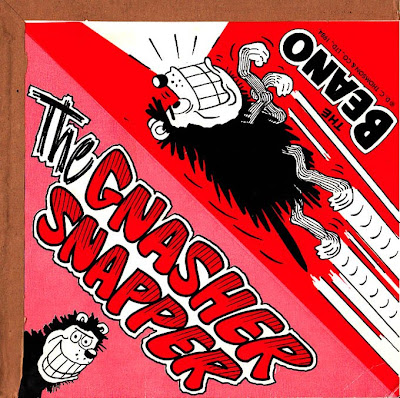 Even Marvel UK got into the act by giving one away in their awkwardly titled comic The Thing is Big Ben... 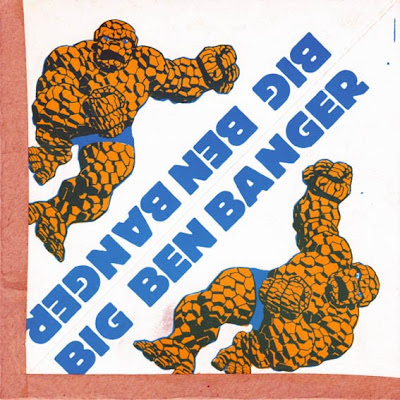 Another POPular free gift was the plastic pop-gun that turned up in various comics over the years. I'm not sure what comic this particular one was from but they were all variations on this design... 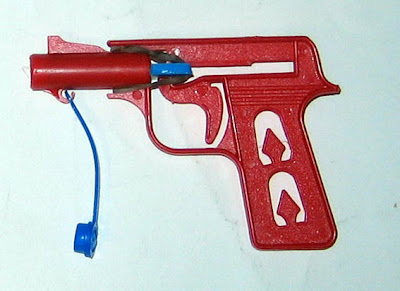 That's it for Part 1. I'll be scanning more random free gifts from my collection in the near future.

Brilliant; brought back so many memories. I remember when they first started giving away edible free gifts. I think the first one was in the late sixties when one of the early issues of 'Big One' gave away a reasonably large bar of toffee.
Big One was a large format comic, like Topper and Beezer once were. It was one of those that got eaten by 'Buster'. I'm not sure if you remember but the publishers used to merge unsuccessful comics with 'Buster' (presumably to keep the handful of fans happy,) but then the merged titled would disappear without trace. It happened to loads: 'Big One', 'Cor!' and, I think, 'Whizzer & Chips' spring to mind, but I'm sure there were many more that disappeared that way.

You have proved how creative and interesting the free gift was..

even the sweets that were given away with a comic in the past were unusual and incorporated into the comic stories..

Also the booklet you had to collect each week to make into a mini comic..those were good..

Or the very large posters..like the Bannaaman one which I've still got and the Beanp and Dandy 50th issue poster..

I wonder when The new Dandy does have a free gift if it will be something creative and worth keeping..

I think a couple of the early Marvel UK weeklies (MWOM? Possibly Spider-man Comics Weekly?) had free iron-on T-shirt transfers. Very exciting at the time!! I'll bet there's not many of those still around these days. I still prefer flat gifts (posters, stickers,transfers etc) to those horrible bulky, bagged, plastic, things you get these days. The plastic gifts always break within a day anyway.

I'll get to those iron-on transfers in a future post Carl. :)

Ah, such memories. We knew they were rubbish back then, but still got excited about them then...and NOW!

The cardboard haggis on elastic kept me going for quite a while! And I didn't realise I ever bought Topper or Beezer (awkward size!) but I do remember the identikit - wired what memory does to you! Thanks Lew for another great pair of posts

Thanks for this Lew some great memories, would love to see a return to these simple free gifts a Harry Hill Dandy Thunder Bang...I can see it now...

I just got hold of a 1970 Sparky gift called "Flicker Pics" which was one of the more `unique` gifts as I can't recall any other comics my era (1960 - 73) ever having similar such gift! Bit of a bidding war on the `Saleroom` site- but I won!! Also got the 1969 "Flip Frog" and "Zoomer Boomerang" (both Sparky) Alan Smith.

Congratulations, Alan! Flicker Pics was one of my favourites too. I thought I'd kept it but couldn't find it so it must be long gone.

Yes Lew! the `Flicker Pics` is a superb gift, it's one I was after a long time! I now have ten `Sparky` gifts out of the 22 lots the comic gave away so some way to go still! I have the 1971 `Dandy Tunderbang` too as well as the 1975 `Korky Glow Mask` Those `Glow` masks would never be given away these days due to Health and safety issues. Do you remember in 1965 when `Sugar Puffs` gave away those `Luminous Spooks` Lew? They were incredible! Sorry if that's a bit off topic.

Ah yes, I do remember those gifts in Sugar Puffs now. I no longer have the gift but there is an ad for them in comics of the period that I have.

Phil Shrimpton had an article about `Dandy` & `Beano` free gifts printed in an edition of `Crikey` magazine. Can't recall which issue- titled "Jump Froggy Jump" most informative. Phil actually got hold of sweet wrapper from 1930s "Sugar Buttons" gift! That really is collecting! To get any free gifts pre 1950s is really difficult I suppose, but Phil has achieved this. Alan.

Thank you for lighting up some long-forgotten corners of my dusty old mind! Keep up the good work. I probably shouldn't be telling you this, but after I outgrew Whizzer and Chips and became a serious grown-up (or so I thought!) I was a Warlord Agent. DC and Marvel comics were seldom seen at my local village newsagent, but then 2000AD arrived on the scene, and everything changed.

Thanks David. I think most of us followed a similar path. I stopped buying humour comics in 1975 when I left school and only stuck with Action, 2000AD and American comics for a few years. It was only when I decided to follow my original ambition to be a cartoonist that I started buying the funnies again (in 1980), to look at them from a professional perspective. Had I not chosen that path I doubt I'd have picked them up again.

Have you looked at the other posts in this series on free gifts? They followed on from this one in 2010.