I was saddened to hear that Martin Skidmore passed away last night after a long fight with cancer. As many of you will know, Martin was the editor of the fanzine Fantasy Advertiser in the latter part of the 1980s and was also an editor at Trident Comics around that time. In more recent times he had revived FA as an online magazine. 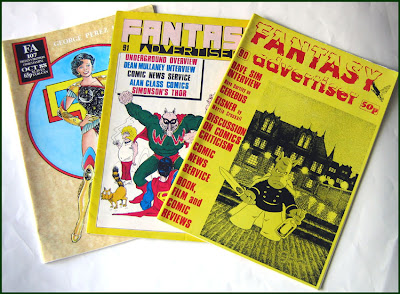 I hadn't seen Martin for many years but knew him well when he he was a regular attendee of comic marts and conventions in the 1980s. A sociable, intelligent, and affable man, Martin had a great enthusiasm for comics and appreciated it in all its forms from the small press, the independents, and the mainstream. He demonstrated this enthusiasm in the wide-ranging contents of Fantasy Advertiser when he succeeded Martin Lock as editor/publisher with issue 90 in April 1985. As anyone who's tried it knows, editing a fanzine isn't a simple task, but Martin handled it well, overseeing and collating 50 plus pages of news, articles, and interviews every two months.

Martin was active in the industry at an important time for comics. The medium was growing up, becoming more experimental, and Martin was involved in all of that, either by reporting on it, interviewing the people involved, or contributing to it himself. And he was right in the heart of it too, attending the Westminster Comic Marts at Central Hall in the 1980s and the lunchtime drinks in the nearby Westminster Arms with Alan Moore, Dave Gibbons, Kevin O'Neill, Eddie Campbell, Mick McMahon, Brian Bolland and many more. Good times, and I think Martin would have been very proud and pleased to have lived through those years.

There's a very nice memoriam to Martin over at the Down the Tubes blog:

I'm really sad to hear the news that Martin Skidmore had died. I never even knew he had been ill, which made the news even more shocking.

I'd like to express my sincere condolences to Martin's family and friends.

Thanks also to you Lew, for letting us know.

Martin will be missed for being a great fella, and the huge contribution he made to the British comics scene. Rest in peace.

Thanks for letting us know, Lew.

Like most people that read Martins FA and other work, I hadn't heard his name mentioned for a long time , so it was very sad indeed to hear of his passing at such a young age -I loved his FA and it was one of the few mags/fanzines I regularly subscribed to so thanks to Martin for the fun, great reads and nice memories - I echo Dave Ws comments Lew it's much appreciated that you let fans know theses things. McScotty

I'm afraid that, if anything, I was behind on the news as I didn't even know Martin was ill until a few days ago. Time flies by so quickly. It seems like yesterday when we all used to gather at the Westminster Comic Marts, but in reality it's over 25 years ago.

Extremely sad news Lew.
I remember receiving a free copy of Fantasy Advertiser no.89 in early 1985 at a comic mart in Manchester and it opened me up to comic fandom and my interest in fanzines that lasts to this day.
I didn't know Martin, but I was a subscriber to FA, and spoke to Martin once, when the FA no.100 was delayed 18 months due to illness.
I recall him being very polite and friendly. His contribution to UK comics is significant and it's very sad to lose someone at a reletively young age.
Again, condolences to his family and friends.