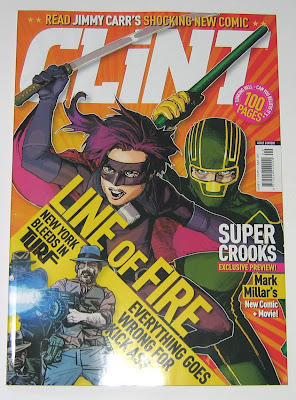 Nicknamed "The Daily Hate" in some quarters because of the "not in my backyard" slant of its articles, the Daily Mail has once again targeted comics. Last time it was taking a pop at The Beano for being too politically correct. This time it's attacking Clint for being just the opposite. (Make your mind up Daily Mail!)

On the Mail Online website yesterday the paper ran with the headline "Controversial comedian Jimmy Carr writes sick comic strip depicting gun massacre". (Full points to the Mail for getting "sick" and "controversial" in one headline, although that's not too difficult when the headline runs to 11 words.) 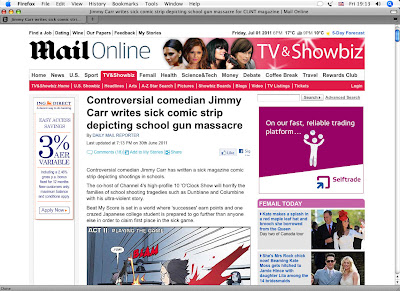 The story in question was a complete strip in Clint No.9, published this week, plotted by comedian Jimmy Carr with art and dialogue by Ryusuke Hamamoto. In the strip, a high school student casually guns down his teacher and his classmates. At no point is the reader expected to relate or admire the killer, and it doesn't end well for him. The twist in the final panel is telegraphed by the story title Beat My Score so the worst that one could say about Carr's plot is that is was predictable.

The Mail neglects to mention that Clint is an adult comic, although that's not really relevant to their story. The point of the paper's attack on the comic (which they call a "magazine" throughout the article) was to claim that Carr's strip "will horrify the families of school shooting tragedies such as Dunblaine and Columbine". This completely misses the point that the strip was about how desensitized the killer in the strip was, not that it sided with his actions, but newspapers like to put their spin on things to froth up public opinion, comfortable in the knowledge that some of their readers won't check out the facts. 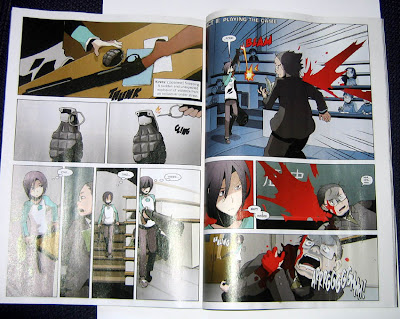 However in this case, public opinion seems fairly indifferent for once. Comments on the Mail's website ranged from a few typically outraged knee-jerkers "What a toilet society we've become", to reasoned responses "Seriously, this is so uncontroversial" and brilliantly satirical comments "I haven't read it, I don't fully understand the medium of comics, I don't really 'get' satire, I don't like comedians - yet somehow I find myself outraged".

A few readers also congratulated the Mail for bringing Clint to their attention so they could seek out a copy. Epic fail, Mail! Perhaps instead of targeting Jimmy Carr the anonymous "Daily Mail Reporter" should have thumbed through the comic a bit further, where they'd have seen someone being shot in the gut, someone else getting knifed in the throat, and a 12 armed prostitute sexually satisfying a chimpanzee.

This is of course a lame attempt by the Daily Mail to whip up controversy where none exists, which is what the paper tends to do. However the more serious implication is that there are some subjects that comics shouldn't touch. This is an attitude that has held back British comics for far too long already, and although Beat My Score isn't really an outstanding comic strip I see no good reason why it shouldn't appear in an adults-only comic.

Unfortunately for the tabloids, they'll have four less chances a year to be outraged at Clint from now on as the 100 page comic has switched from 13 to 9 issues a year frequency. http://titanmagazines.com/t/clint/

I'm just happy to see Clint and Beano / Dandy getting continued exposure in the mass media. I've always felt my favourite British comic 2000AD is missing a trick by not causing more offence.

With a new royal wedding, the 30th anniversary of Charles' nuptials, and Di's recent 50th birthday surely this would have been a good year for Dredd to fight a zombie Diana, clone Diana, animatronic Diana or something equally irreverent. "Di Hard", "Di Another Day", - this stuff practically writes itself. Too bad Newsweek beat them to it.

Always good to see the Mail generating interest in a subject by attacking it. With any luck, they'll have significantly increased sales of this issue!

"Controversial songwriter Paul McCartney was accused today of writing a sick song celebrating a killer who hit people over the head, Maxwell's Silver Hammer, which will horrify the families of the victims of mass murderer Levi Bellfield."

"Controversial Victorian poet Robert Browning was accused today of writing a sick poem celebrating a mass child abduction, The Pied Piper of Hamelin, which will horrify the families of abducted children such as Sarah Payne."

"Controversial Elizabethan playwright William Shakespeare was accused today of writing a sick play, Othello, which will horrify the families of women killed by their husbands."

You should just ignore them really, Lew! There seems to be a lot of getting irate about the "Hate Mail" on blogs, Twitter etc. all with links to the Mail site. I'm sure a hefty chunk of their online readership is people who are anti-Mail, but they don't care either way, it all helps make the Mail the second most popular newspaper website *in the world*!

I think it's more to do with having the name 'Jimmy Carr' attached to the strip...it's a celebrity story on a slow news day with a predictable spin.

As for the glaring inaccuracies...Amanda Platell was still telling her readers that Marvel were killing off Spiderman last week, and it was something to do with the failure of the Broadway musical! She gets paid a hell of a lot of money, I heard...

The Daily Mail is just jealous because its own strips are such pure sh*te.Hang on- the rest of the Daily Mail is pure sh*te too!
Although, I'm surprised they haven't picked up on the 'real life superheroes' in America. They all have names like 'Citizen Prime', 'The Dark Avenger' and the 'Crimson Fist'.Surely they would start an upsetting trend of young kids wanting to dress up like superheroes and walk the streets at night fighting crime9God, this is easy! I could be a Daily Mail journo!)
A lot of the heroes seem to be overweight, or sad.Not too many heroines, just one called 'Nyx'. My real life superhero name would be 'Mr.Cyclops'-or maybe 'Doctor Cyclops' sounds more professional, and my parents always wanted me to be a doctor.What would your superhero name be, Lew-Dr. Nuneaton?

Your blog is excellent.

Maybe the implication of the article is that being exposed to such violent imagery is what leads to some people being desensitized. You should credit newspaper readers with enough intelligence to make up their minds for themselves, instead of putting your own anti-newspaper spin on things, knowing that most of your readers won't check out the facts. The article clearly recognizes the absurdity of Clint glamourising violence while simultaneously defending the story as a 'satirical sideswipe at the glamourisation of violence'. It seems highly hypocritical of you to insist that comics should be able to print what they like, but that newspapers shouldn't be able to represent the other side of the argument. Please give us all a rest from your anti-newspaper preaching.

"putting your own anti-newspaper spin on things, knowing that most of your readers won't check out the facts"

What a strange accusation! On the contrary. I hope people reading my blog WILL check out the comics I plug. (And I hope they follow the link to the Mail's website to judge the level of that article for themselves.)

Have YOU read the strip in Clint? The issue is still out if you haven't. £3.99 of your hard earned cash.

The comment from anonymous bears the same sentence construction and attitude as the comments from the crusading stalker who polluted your blog in the past.

If the events of the last week have taught us anything it's that newspapers should behave responsibly.

When the Daily Mail attempts to create a moral panic over a comic, with no basis for those concerns, it's behaving irresponsibly.

The silence from the critic suggests he hasn't even read it. Like any artform, adult comics should be allowed to address any subject. These are the sort of principles organizations like the Comic Book Alliance and CBLDF stand for.