The Avengers arrive in the UK 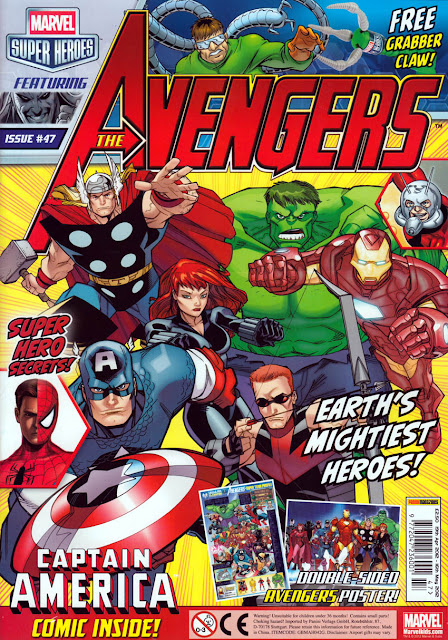 A few years ago Panini UK launched Marvel Heroes as a comic magazine for children featuring brand new Marvel comic strip by British creators. Last year, after 35 issues, Marvel's owners Disney decreed that the UK could no longer generate its own material and should use content that they supplied instead. They also changed the magazine title to Marvel Super Heroes.

This week, the title changes again just in time for a certain movie premiere. Now it's Marvel Super Heroes featuring The Avengers, - although it's obvious by the cover that kids will just refer to it as The Avengers comic.

Although Panini UK already publish Avengers Assemble (running reprints of recent Marvel material) for older readers, this new Avengers comic is aimed at the younger end of the market. It contains an 11 page comic strip from Marvel's "adventures" line and various puzzles, fact files, posters and suchlike. Plus a cover-mounted toy in the form of a Grabber Claw. 36 pages for £2.50. 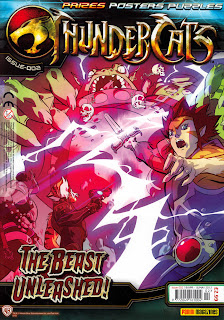 Yesterday also saw the publication of ThunderCats No.2, also from Panini UK. However this title does feature all-new British comic strip. A 13 page story by Ferg Handley, illustrated by Cosmo White with Kat Nicholson on colours. And they did the cover too. Very nice work. This has the potential to become this generation's Sonic the Comic hopefully.

ThunderCats also features activity pages, fact files and posters, plus a two-page photo strip using ThunderCats action figures which actually works better than you might imagine. Bagged with a toy it's 36 pages for £2.99.

The shelves of UK newsagents are certainly packed these days. Admittedly many of the titles don't feature comic strip, or feature reprint from overseas, but with titles such as ThunderCats, Beano, Toxic, Dandy, 2000AD, BeanoMAX, Commando, and more it's obvious that the mainstream UK comics industry is not as dead as some critics claim.
Posted by Lew Stringer at 12:13

I'm really pleased to see so many new comics on the shelves. I wish them all luck. Let's hope some of them have a long run.

Um... I don't know quite where to begin. THUNDERCATS is not a British creation as I'm sure you are well aware of and you've already admitted that AVENGERS is USA reprint.

I never buy childrens comics so I can't comment too expertly on DANDY and BEANO but I have read that they're not as good as they were and feature poop jokes, puzzles and what have you instead of proper stories.

The rest are just magazines. Not even that. They are nothing but glossy promotions for toys with the looks of things.

The British comics we knew and loved ARE dead. Today's pamphlets look like ASDA brochures and do NOT resemble comics or story papers in any way.

13 pages of comic? I may just have to start getting that. Made vague efforts to look for the first issue but all of the bagged tat looks the same.

Glory Hallelujah, Beano and Dandy contain mostly comic strip material. Puzzles take up maybe 1 or 2 pages tops, and poop jokes are nowhere near as commonplace as you seem to think.

And Thundercats is an American cartoon, true, but the comic strip material in the Thundercats Magazine is British.

"I don't know quite where to begin."

Funny.. i was thinking the same after reading what you said.. You are open to your own point of view of course, but...

Thundercats is American and Japanese, but this is a UK comic with Original UK stuff. The Avengers mag does have American stuff, true, but it's an British title reprinting that.. Just like many of the 60s comics like.. Smash, Pow! Eagle

"The British comics we knew and loved ARE dead. Today's pamphlets look like ASDA brochures and do NOT resemble comics or story papers in any way."

We? bad use of term really. You are stating your views, so it should be 'I'. Unless it's you and your friends, in which cause you should state who the 'we' are. I would also read up on what a 'pamphlet' is. I don't shop at ASDA so i can't say what there brochures look like but shops have gone back to using comic strips in them, I might be interested. I have mentioned more then once i liked the old days of Crisp packets with Comics and stuff like that. I've read a few good dentist ones.. Okay, most of them were stupid (like the Cartoons being shown at my local dentist.. about a guy who runs around your mouth with a dog that is probably fouling all around the place, keeping your teeth clean.. weird stuff) but they were fun for the sake of fun.

Which period of comics anyway? Eagle went thought tons and so did Lion, Buster and Topper.. What do you class as a 'real comics' Oz? Sparkle? Punch?

"The rest are just magazines. Not even that. They are nothing but glossy promotions for toys with the looks of things."

Were do i begin with this? No, really, TV Action wasn't an advert for TV shows, Dan Dare was never used to sell LPs, T-shirts, cartoons, etc... Yep, the good 'ld days.. Bugs Bunny never sold war bonds and while we are at it, Lew Stringer never drew a single Yampy tale in his life.. Yep, Gotta love this narrowed minded dream.. Oh wait.. I think I just Read stuff on this site.. where Mr. Stringer (calling your better by his first name alone as if you were a close friend? tis tis) has made comments about this very matter..

I'll just skip over that so i can rant a bit more with my fingers in my ears and my eye sewn shut.

Thanks James and ManicMan. You've hit the nail on the head.

I was reluctant to reply myself as such replies are often misconstrued as "attacks" or "bullying" by folks similar to this.

Glory, "I never buy childrens comics so I can't comment too expertly" says it all. Try a few. You might enjoy them.

If I want the opinions of a couple of your sychophants I'll ask for it. As for bullying, yes it is bullying when three people gang up onto one.

MANIC MAN, I never said THUNDERCATS was an American comic. That's how you perceived my comments. Your problem, not mine. My point was that it's not an original British comic creation, therefore it shouldn't be lumped in with genuine British comics.

As for modern DANDY and BEANO, took a look at them, didn't like them. They're just not the quality they used to be, and that's plain fact.

Real comics? I've already mentioned which titles I consider real comics. LION, EAGLE, TOPPER, BUSTER, and, while I'm here I may as well add HOTSPUR, SCREAM, VICTOR, TV COMIC. Need I go on? No, thought not.

"Glory", it's not "bullying" to disagree with the opinions of someone.

On the other hand, your insulting attitude (calling people "sychophants") has now denied you any further opportunity to post your comments here.

sycophants
plural of syc·o·phant
Noun: A person who acts obsequiously toward someone in order to gain advantage; a servile flatterer.

I was not giving flattery to anyone apart from a minor line commenting on basic rules of repect.

I was not giving fawning over anyone and I had no advantage I can think I could gain.

Of course.. if someone wants to give me a fiver or something.. i wouldn't complain ^_^

" I never said THUNDERCATS was an American comic. That's how you perceived my comments. Your problem, not mine. My point was that it's not an original British comic creation, therefore it shouldn't be lumped in with genuine British comics."

If you class British comics as only comic created using or by english people including character creations.. i think you can rule out many of the comics you list. Anyway.. this is just going to go around in circles...

Oh, by the way.. I knew about the strip, but i didn't know that Frank Hampson's "Tommy Walls" (from Eagle) was the FIRST Commerical cartoon designed purely to sell merchandise (In this case, He would get his powers by eating Walls ice cream). Since he first appeared in Eagle #1 1950.. Yep.. promotions for things less healthy then toys back then.. who would have guess ¬_¬;

Errrrr ahem Mr Manic Man what ya mean "If you class British comics as only comic created using or by english people including character creations.. i think you can rule out many of the comics you list" why is it always "english" people (DCT are Scottish or is that British) - ok half kidding but 1/2 miffed and here was me going to wax lyrical about you and Digis wonderful not aggressive reply to "Glory's" retort - I may tell the Joe Broon on you and where would you be then?? - seriously Glory I dont see why you got so upset - Scotty McSCOTTY

Ah, Sorry ^_^ Sometimes I don't notice I've written the wrong word until it's too late.. if then.. Happens when I talk too.. in fact.. it seams to be getting worse.. I was talking about the Mice problem they had in a Tesco in London and since of Mice, I said Rice.. Guy thought it was funny to have Rice running about the place ^_^

Three people having a different opinion is "ganging up"? And we used to have an empire...

Anyway I trust Glory Hallelujah gets The Phoenix, as he appears to like weekly British adventure comics containing original characters. We won't get any more by sitting around complaining about it, the bean counters in charge at publishing companies need to see some numbers!

Don't forget Strip magazine as well, I got issue 3 from Forbidden Planet Dublin and theres some great work by Nick Dyer and John Ridgway.

That Thundercats cover does look pretty sweet. There are plenty of us that remember the Thundercats from the 80's, I wonder would panini collect the new strips they do into a trade paperback?

I didn't include Strip because I was specifically talking about comics that are available in newsagents. (Strip won't be in newsagents until Vol.2 No.1 next month.)

I reviewed Strip No.3 in an earlier blog though.