Free Gifts in The Big Five 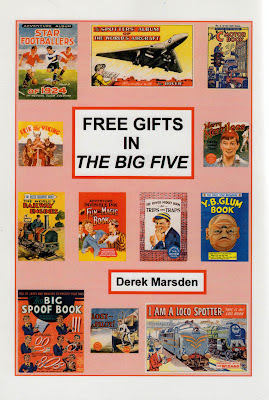 Free gifts (or supplements) in comics and story papers are as collectible as the publications themselves, and often far rarer due to them being discarded long ago. Therefore it's a pleasure to see Derek Marsden's Free Gifts In The Big Five, a hefty 256 page A4 softback book which relates in detail the history of gifts given away in the DC Thomson story papers.

Despite the "Big Five" of the book's title, the content actually deals with eight story papers, so we're getting even better value for money than we expected. Titles covered are  Adventure, The Blue Bird, The Hotspur, The Red Arrow, The Rover, The Skipper, The Vanguard, and The Wizard. Each story paper has its own chapter, and the gifts are listed chronologically with a description of each item. The author goes into great detail on this and in lesser hands it could undoubtedly prove boring or stray off at tangents, but Derek Marsden (a semi-retired teacher) is a meticulous writer who hones in on the facts in a very precise and informative manner. 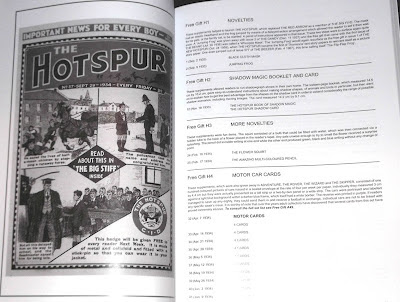 Mr. Marsden has certainly packed a lot into this book. The amount of research involved must have been very time consuming but the result is rewarding both for the reader and, I hope, for the author. The text is in a small type, but very legible, aided by the clear, unfussy layouts. There are numerous illustrations from comics and story papers of the day showing advertisements for the free gifts which are a joy to behold in their own right as they're so lively and well designed. In the centre of the book is a 24 page full colour section showing the gifts themselves, all with reference numbers (eg: H19 for the 19th gift given in The Hotspur) so that the reader can easily cross reference them with the descriptions elsewhere in the book. 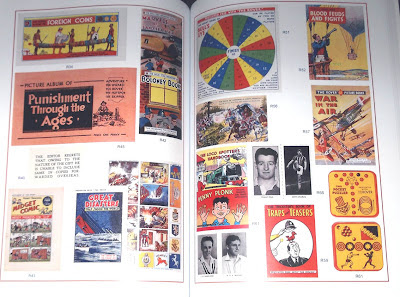 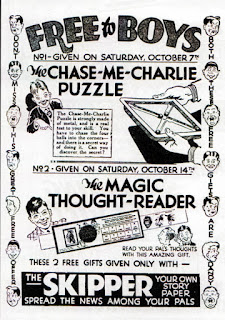 What soon becomes evident from the glorious items on display is how superior they were compared to the cheap plastic toys bagged with modern comics. The gifts of the 1920s and 1930s were often informative (booklets, picture cards) and created specifically for that week's story paper. (Today's gifts are bought as a job lot and they often also appear with rival publications but with different packaging.) Even the less educational gifts way back when seemed to offer greater play value than the disc-launchers and plastic poo in modern comics. That said, to be fair, the story papers of the past were aimed at an older and perhaps more literate reader than the comics of today. 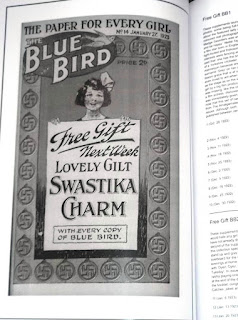 Naturally the passage of time has made some items seem unintentionally humourous today. Would a 21st Century kid be remotely interested in 'The Bumper Hill-Billy and Camp-Fire Song Book'? Could a comic now present 'The Queeriosity Book' without raising an eyebrow? On the other hand there is one gift shown that seems chilling today; an issue of The Blue Bird presenting a 'Lovely Gilt Swastika Charm' back in 1923 before the Nazis corrupted the symbol into a thing of evil.

Free Gifts In The Big Five is a fascinating insight into a time long passed and an essential purchase for anyone seriously interested in the history of comics, story papers and/or related ephemera. If you wish to order a copy through your bookshop the cost is £30 and the ISBN is 0-9551978-0-5. Alternatively you could purchase a copy directly from the author for £20 plus p&p by e-mailing him at derek.g.marsden@sky.com
Posted by Lew Stringer at 12:25

looks pretty interesting to me..

I can see why 'modern' views are what they are, but a Swastika IS a symbol of good luck. Tons of People have used it and done good and evil things.. okay, retire it for a brief time just after WW2.. Makes sense.. But how many years later are we know and we haven't learnt a thing from history? There are still quite a few places in the world where they still use it for there reasons (Buddhists and Hindus etc).. I think the manji is still used.. The Finnish Air Force still used it..

Should ever symbol ever used by evil people be taken like this? While i can see why it might be offensive for a brief time, BUT forever? Jack the Ripper was evil.. should we not use the name 'Jack' or 'Ripper' anymore? (not that he was his name or anything but there you go)..

Well it didn't bring the Nazis much luck in the end thankfully!

No, it's too closely associated with Nazism for it be be used for anything else now. Bear in mind that many people who lived through WW2 are still with us so it'd be insensitive for the Swastika to go back to being some half-assed "good luck charm" codswallop.

yeah, that's fair enough, but.. why is to still too closely associated with Nazis?

Personally, i HATE the use of Poppies in remembrance day. To me, the Poppy is a sign of opium. Something we thought 2 fairy big wars to get rid of, kills hundreds in WW1 and WW2, and the 'stronger version' (Heroin) is still around killing alot of people.. But i accept some people think it's okay. So like i said, i can see why some people think it's still got alot of bad associations but.. how long till things can return to normal? I've seen Red Skull figures which they didn't want to put a swastika on because of all the negative feedback.. which just makes no sense at all..

and why have only some symbols been taken like that? They also have very close links with that Eagle, but that doesn't seam to have alot of bad links.

Just what the coffee table needs. Seriously though , kudos to Derek for doing this. Can't have been easy. Wonder if he got any help from D.C.Thomson?

The Raelians 'recently' (well 2003 I think) recently returned the swastika to thier symbol, after using a 'swirl' for ages. It's also used on maps to indicate Buddhist temples.
I think it's only recently the Finnish air force started re-using it too. There was actually a Commando comic a while ago about British pilots temporarily attached to the Finnish air force being shot at by British anti-aircraft gunners.
That said, the one in the advert looks almost exactly like the ones used at the top of Nazi standards, which they carried on thier big parades.

I did make the point in my book that when The Blue Bird gave their swastika charm to all the schoolgirls who bought the paper that week in February 1923, the swastika was still a good luck charm. Although Guido von List had suggested as early as 1910 that the swastika should be used as a symbol by all anti-Semitic organisations, it wasn't officially adopted as such until the formation in Germany of the Nationalist Socialist party in 1919/20. It was incorporated into the national flag in 1935.

Yes, Cap, I did get all the help that I needed from DC Thomsons. In the overall scheme of things, I didn't need a great deal because I have most of the issues of the Big Five, and I took copious notes on the rest during months of research in the British Library. However, there were several areas where I needed to ask for some in-house research to be done for me. Most of this was done by Calum Laird, and I am immensely grateful to him for his work on my behalf, but more so because he seemed as enthusiastic about the project as I was, and during it I think we became friends. Calum got together with Kenny Walls in the Digital Print department and Thomsons duly printed and collated the pages, which they then sent to a binder in Newcastle to be finished off, and Calum eventually arranged for them to be delivered to me. I'm hoping for more of the same from the company when I finally complete my history of The Wizard, which does seem to be taking forever.