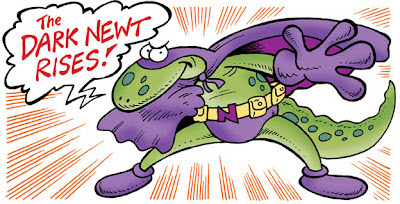 He's all-new and he's all-newt! He's The Dark Newt and he's coming to The Dandy next Wednesday (July 18th)!

You may remember me mentioning that I was working on a new series? Well this is it. The Dark Newt runs for six issues, in full page adventures starting in The Dandy No.3590 next week.

This is the first time I've solely created a character for The Dandy. (Kid Cops and Postman Prat were created by the editors and passed to me to develop.) I'm very proud to have created a new strip for one of my lifelong favourite comics in The Dandy's 75 anniversary year but I'm also a bit apprehensive about the reaction. I'm hoping readers like it. I certainly enjoyed writing and drawing it.

Meet The Dark Newt, - next Wednesday!

Email ThisBlogThis!Share to TwitterShare to FacebookShare to Pinterest
Labels: The Dandy, The Dark Newt

Ha! The Dark Newt - like the pun there! Looks great already - can't wait to read it!

Thanks George. Yes, the name and premise is a spoof of The Dark Knight but it goes off on its own direction. Good job too as there are a couple of other Batman spoofs in that issue by other artists. Anyone would think we were all influenced by some movie or something. :)

and his sidekick is... "Reuben the Tadpole" maybe???? i got that from an old Monkees tv show episode where they parodied other tv shows - Frogman(played by Peter Tork) and Reuben (played by the late Davey Jones), that was a spoof of the 1960s Batman tv show of the time, complete with the camera angles and colourful sound effects. i'm sure you seen it lew.

You're close! There is a tadpole in some episodes, but he's not really a sidekick. (Perhaps in series 2... if there is a series 2.)

I'm sure I must have seen that Monkees episode back in the sixties but I don't recall it now.

The green/purple design; I hadn't thought about TMNT (never read those comics or seen the movie, but I am aware of them of course, - hard not to be). There is a similarity though, but green with purple seemed a natural combo. He had to be green, being a newt (although some newts in the strip are orange) and his costume had to be dark. I didn't want to use black, and blue clashed, so purple it was.

Given this a quick plug Lew, best of luck with it: http://downthetubescomics.blogspot.co.uk/2012/07/dark-newt-rises-in-dandy.html

Thanks John! Very much appreciated.

This is inspired. I laughed as soon as I saw it. I think kids wil 'get it' and they will love it.

Our subscription copy has arrived. I loved it Lew. Great strip and I look forward to seeing how it develops.

Thanks David. My subscription lapsed (must renew) so I haven't seen it in print myself yet. I'll be rushing to my newsagent on Wednesday. :)

Both my kids enjoyed The Dark Newt and are pleased to hear he will be in the next few issues.

My youngest was even telling one of his friends about it as I walked him to school on Monday.

My 10 year old son has just me to say "BRILLIANT!"

Excellent. I hope he enjoys the weeks ahead. :)