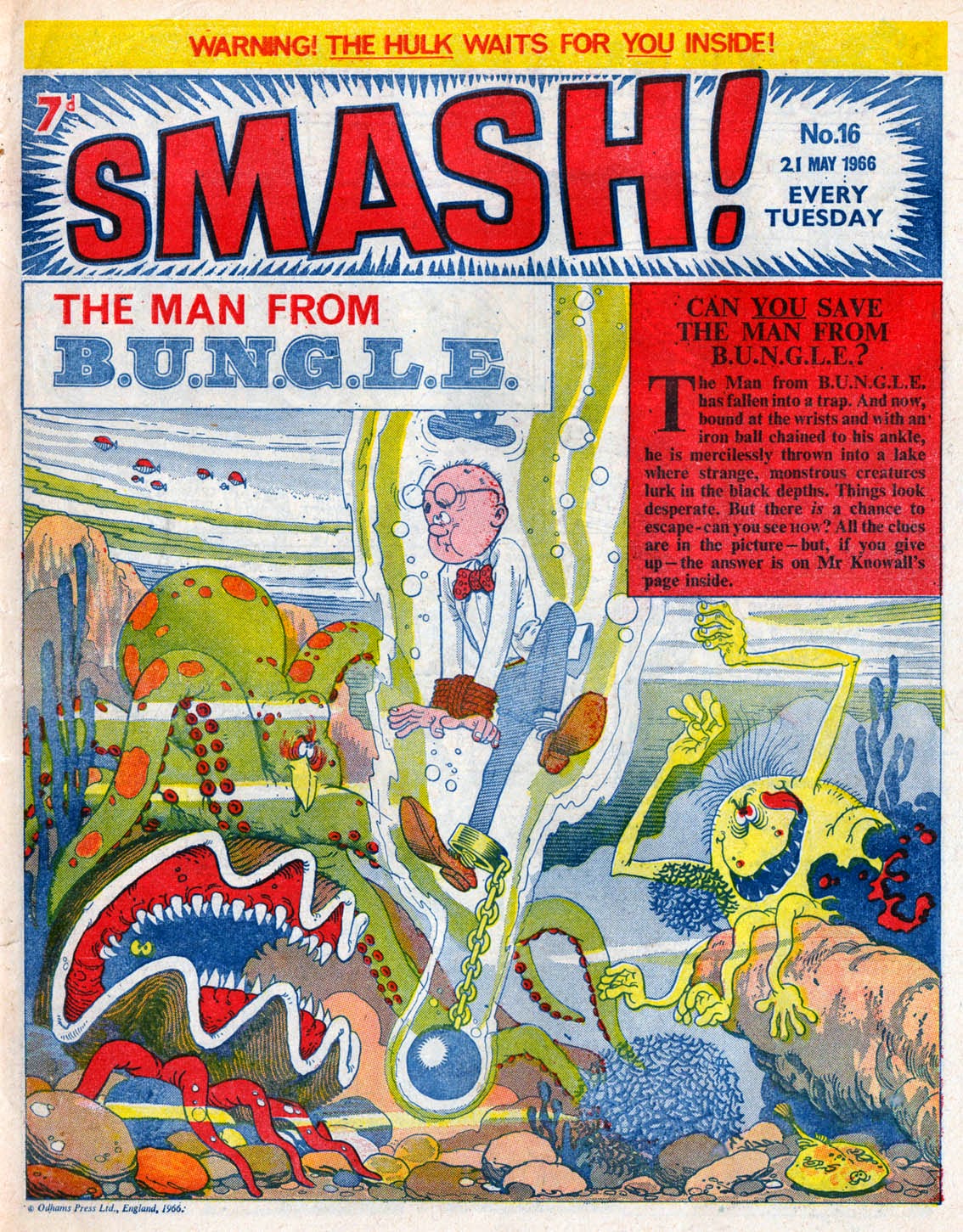 It was 48 years ago today when Odhams Press Ltd. began their association with Marvel Comics by publishing reprints of The Incredible Hulk in the pages of Smash!

Yes, I know some sources claim that reprints of The Fantastic Four began in Wham! first, but that's not true. (Trust me. I have the comics. The FF came to Wham! a little later.) It was the issue shown here, Smash! No.16, dated 21st May 1966, that was the first Odhams weekly to feature a Marvel reprint.

Curiously, they started by reprinting Incredible Hulk No.2 rather than the first issue, but what a great choice! The opening image of the Hulk emerging from the swamp (by Jack Kirby and Steve Ditko) was a perfect and powerful way to introduce the character to British readers. (Parts of Hulk No.1 were reprinted in following weeks, and the origin chapter in Fantastic in 1968.) 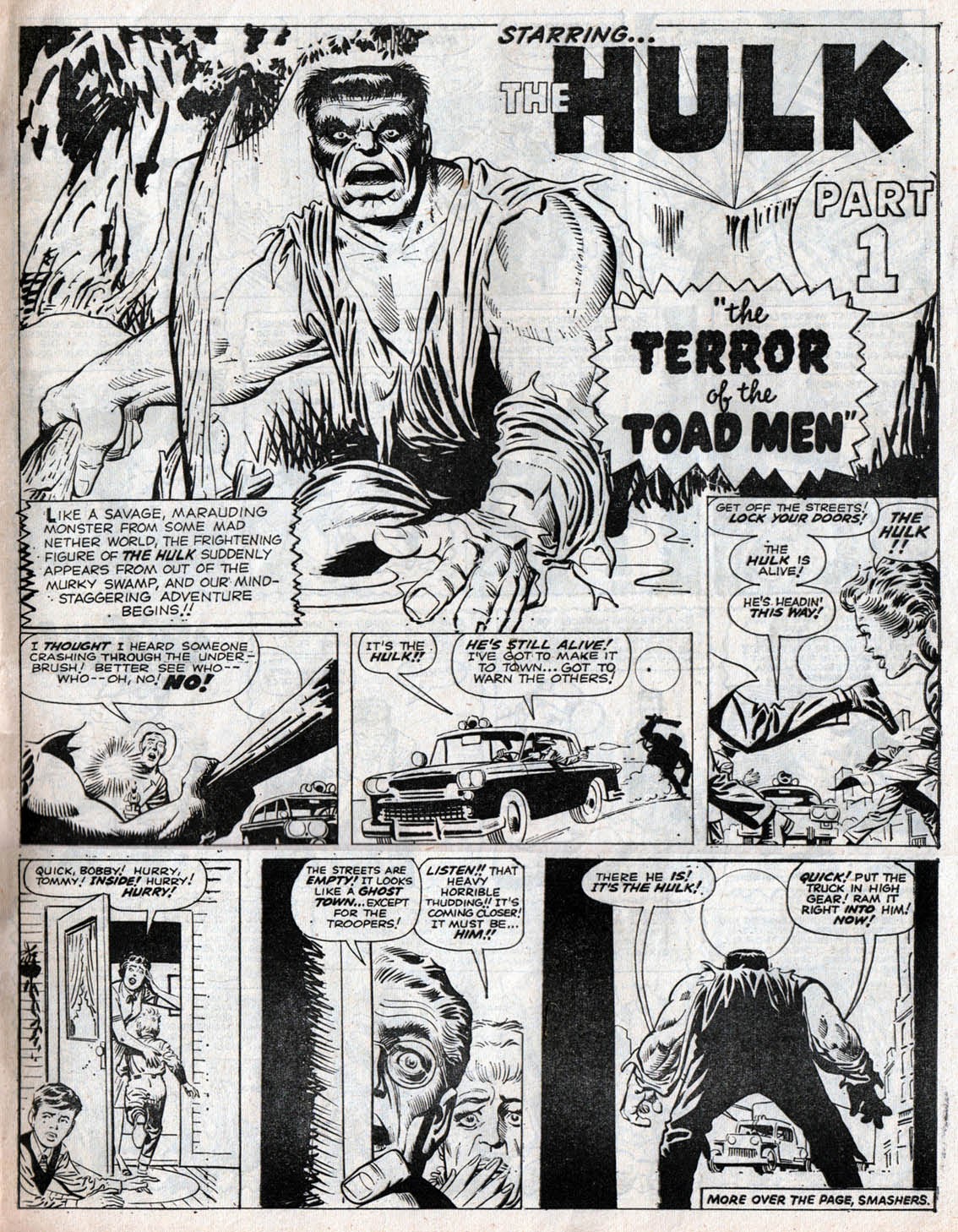 The original Incredible Hulk comics (and his following appearances in Tales to Astonish) had been available in some UK newsagents but distribution was unreliable. The reprints in Smash! were the ideal way to showcase a consecutive run of Hulk stories and, for many of us, were our first discovery of the character.

Due to the page size of British comics being considerably bigger than American comics, panels from the Hulk stories were arranged to fit more onto each page. This first appearance of the Hulk ran to six pages in Smash!, - roughly 11 pages of the American comic. 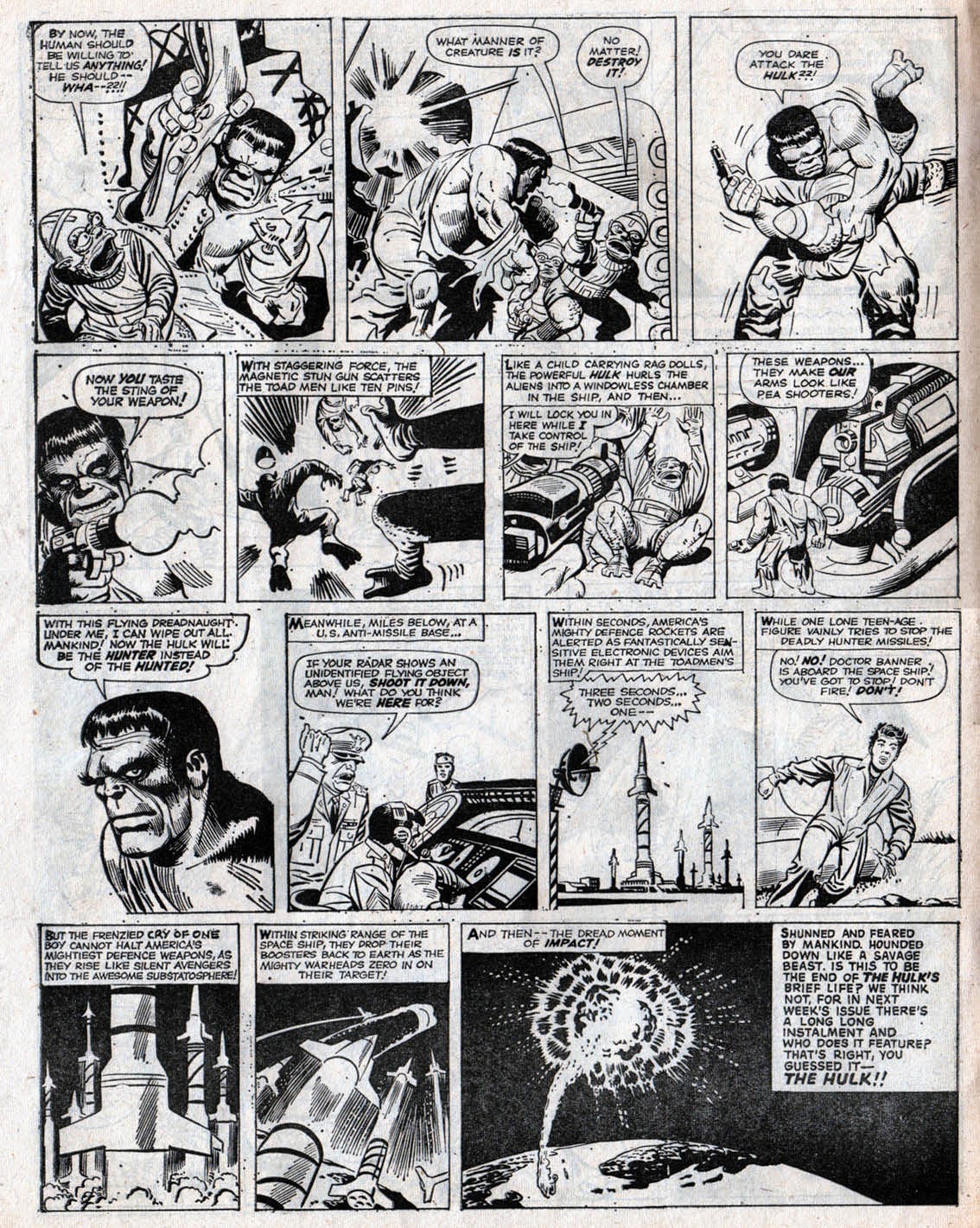 The editorial in the letters section gave The Hulk a shout out, and encouraged readers to hold on to this issue... 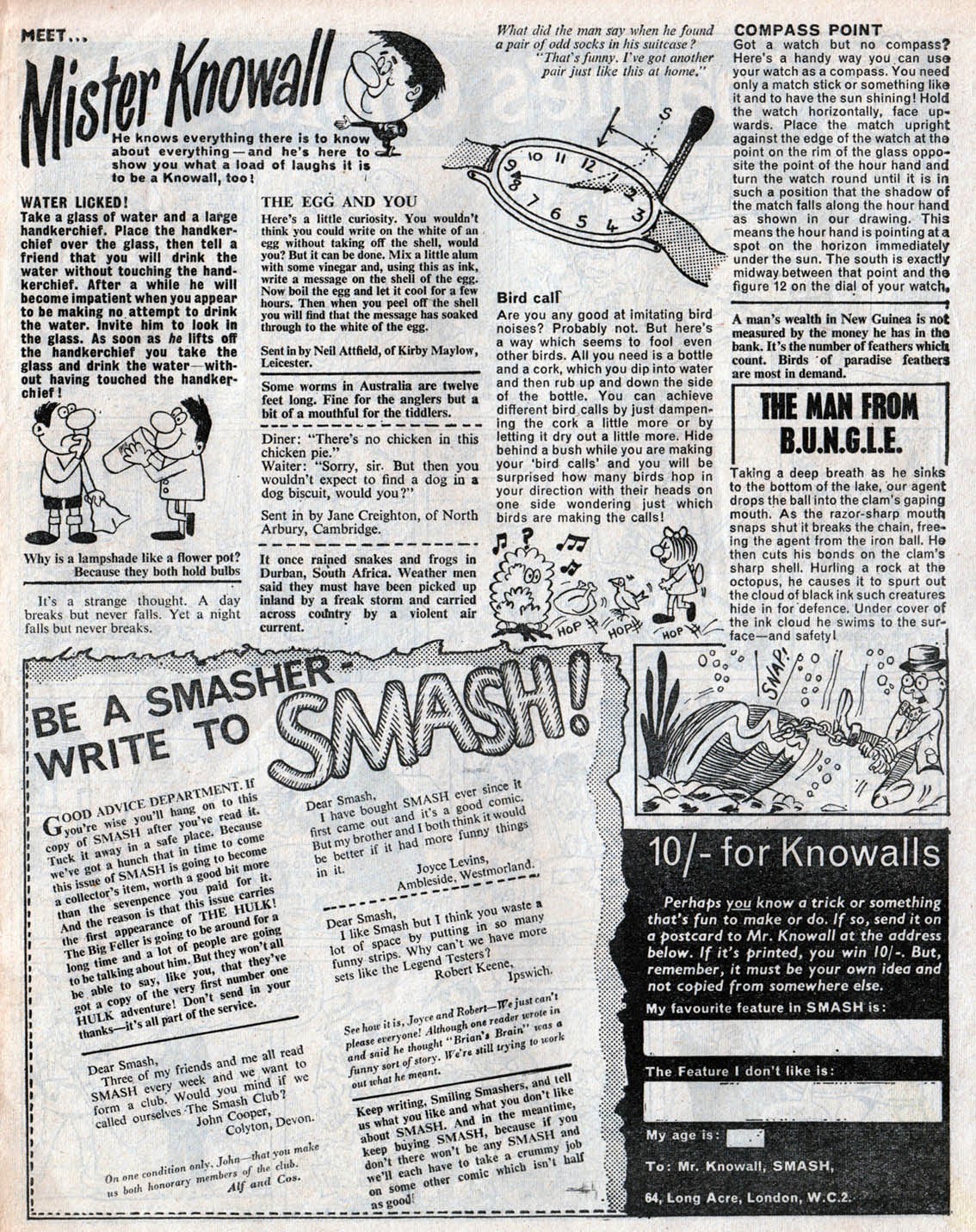 What else was in this landmark issue? Well, some excellent new British material, that's what! Let's have a look at a few highlights, starting with the brilliant Man from B.U.N.G.L.E. cover by Brian Lewis at the top of this post.

On pages 2 and 3 was the second chapter of a strip that had begun the previous week, - The Rubberman! Story by Ken Mennell with art by Alfredo Marculeta... 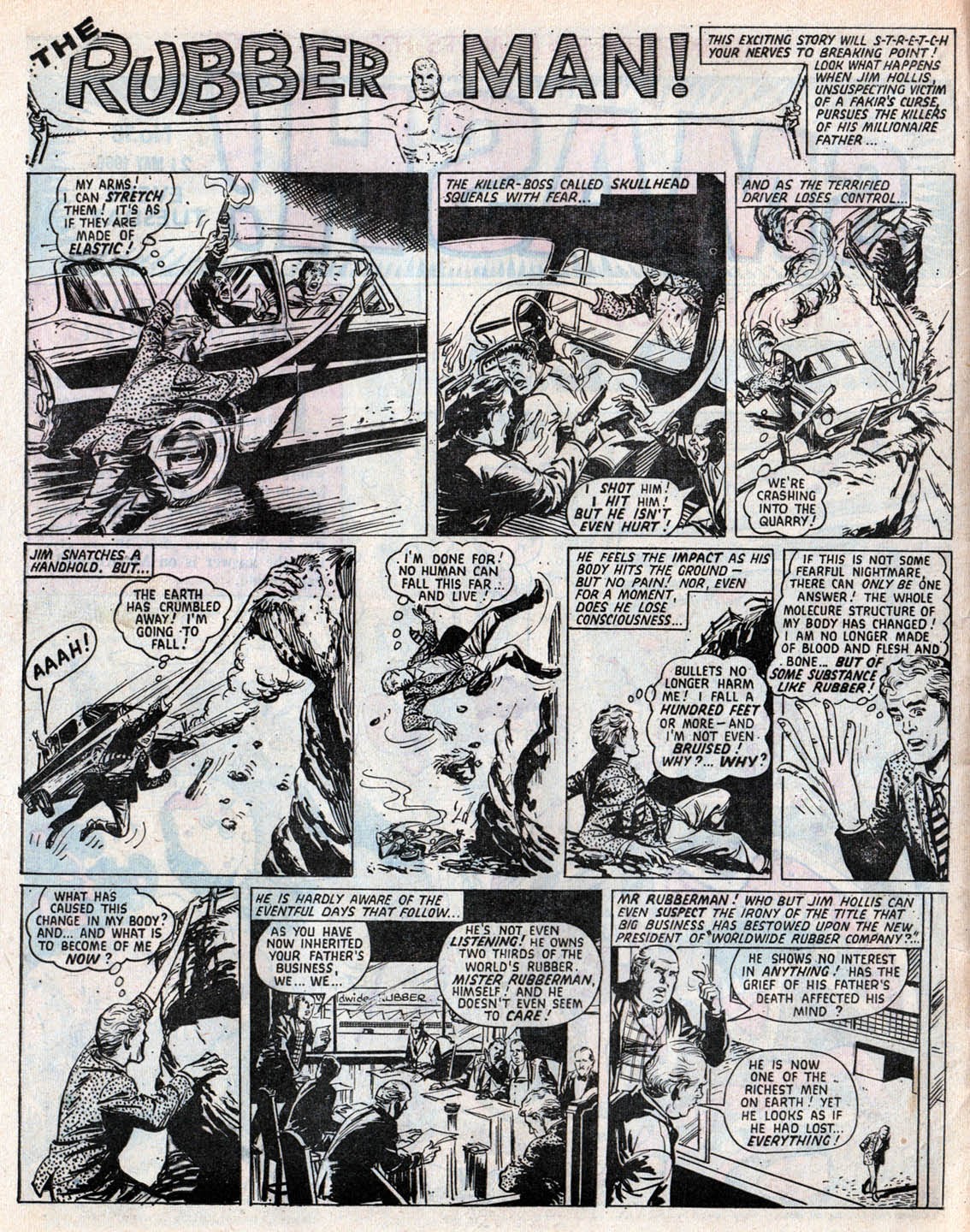 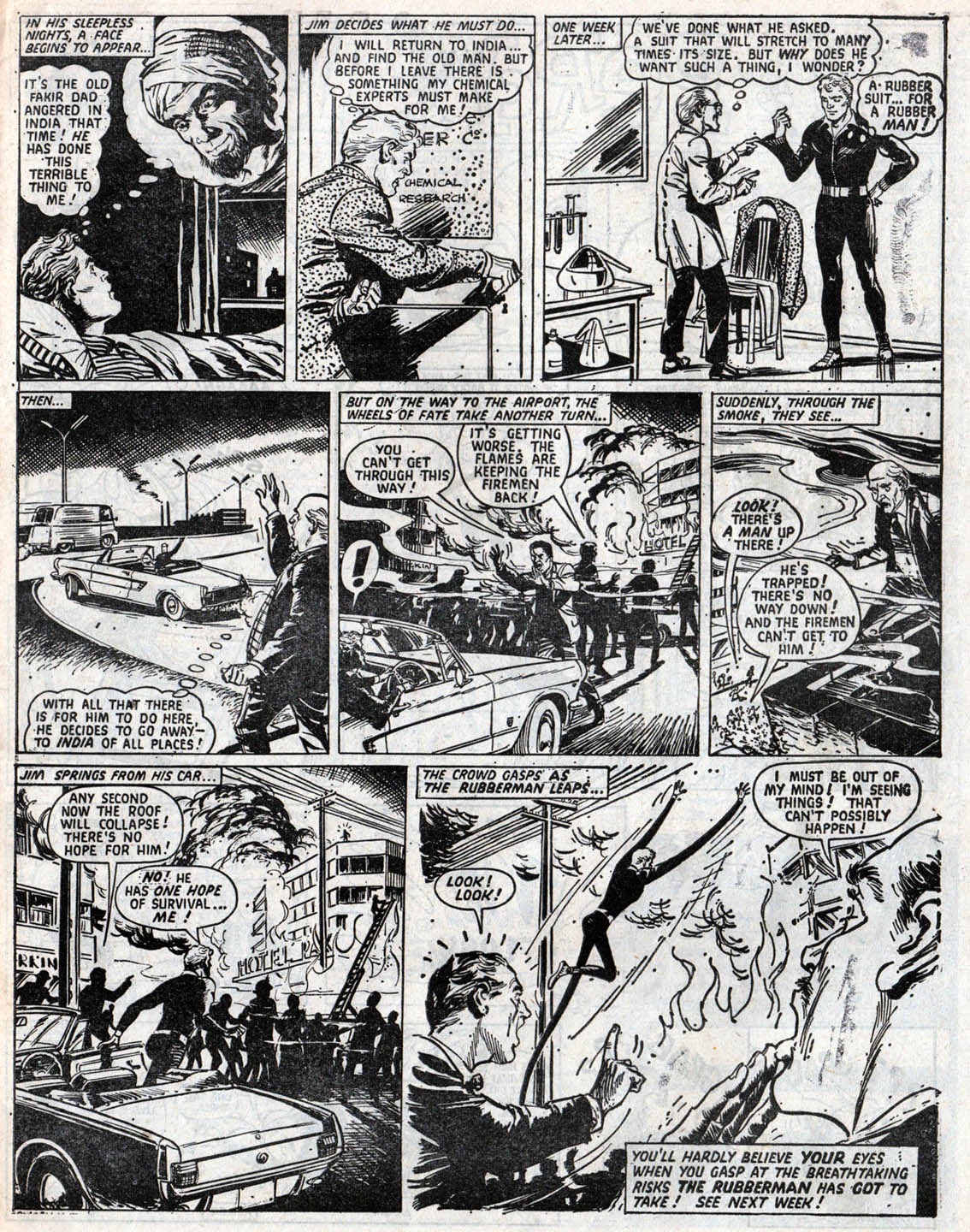 Ken Reid's Queen of the Seas is always worth showing here... 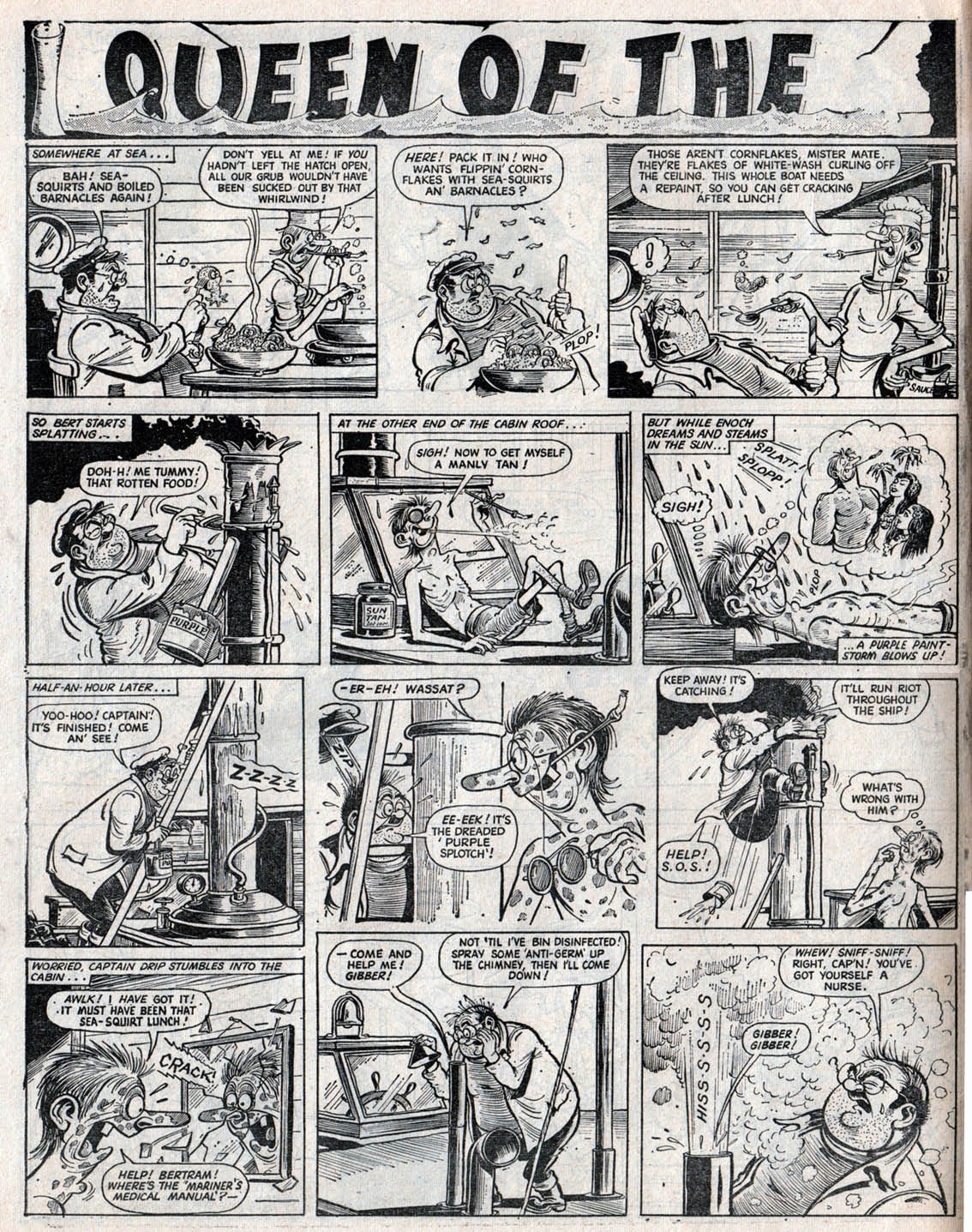 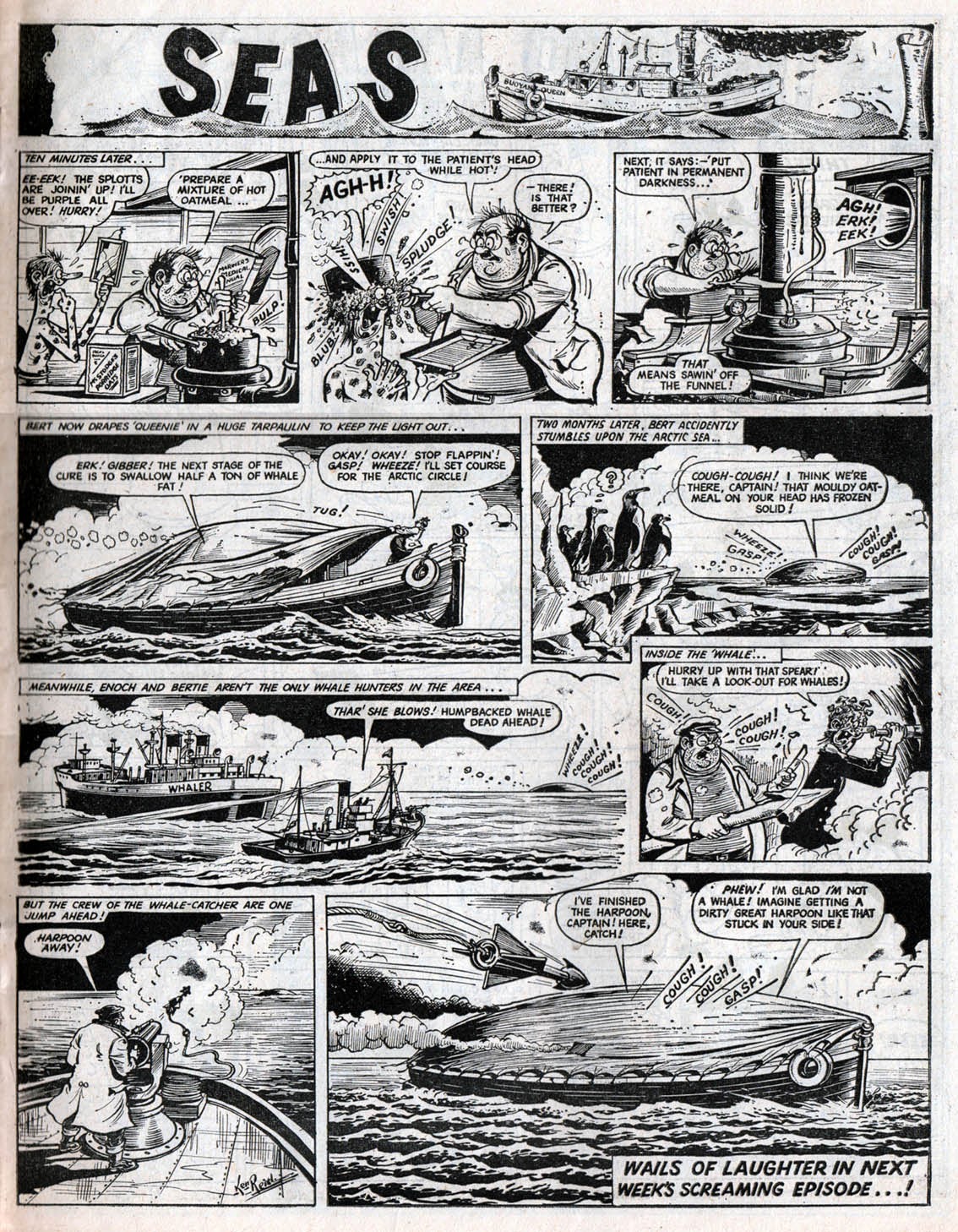 This next offering is The Legend Testers, although it had dropped its regular title that week to be called The Feast of the Trolls. And as I found out, you should never feed a troll. Excellent horror comic art by Jordi Bernet... 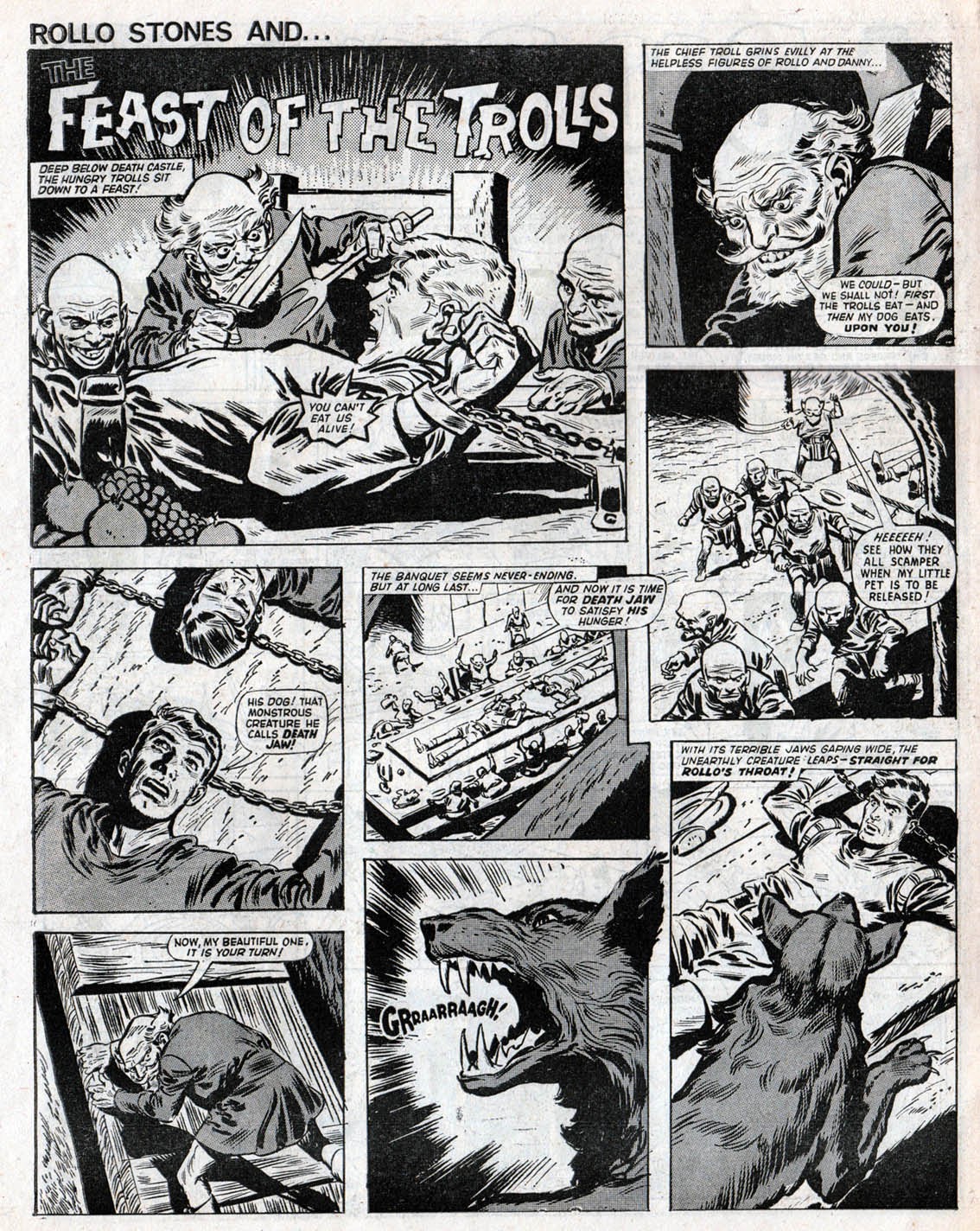 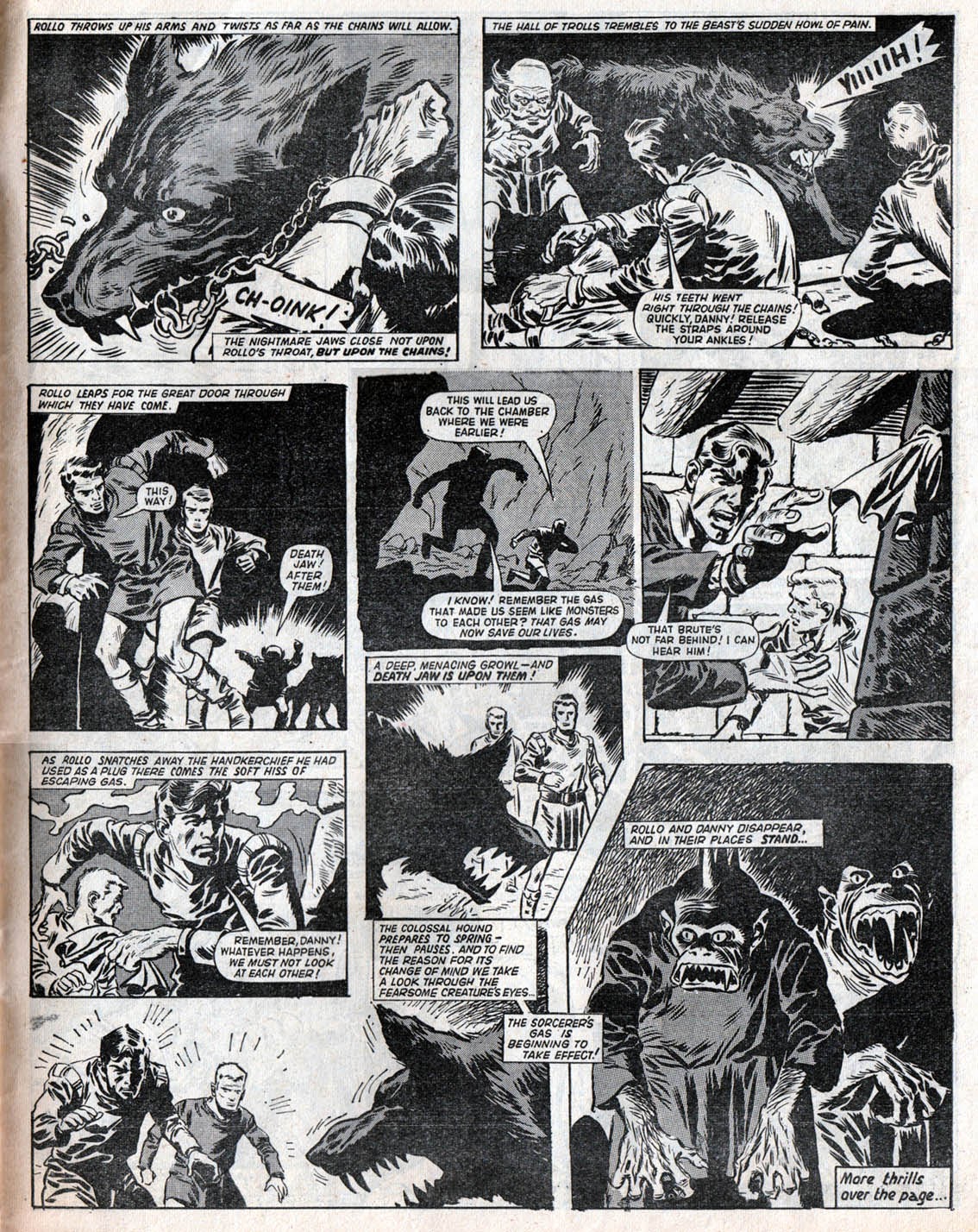 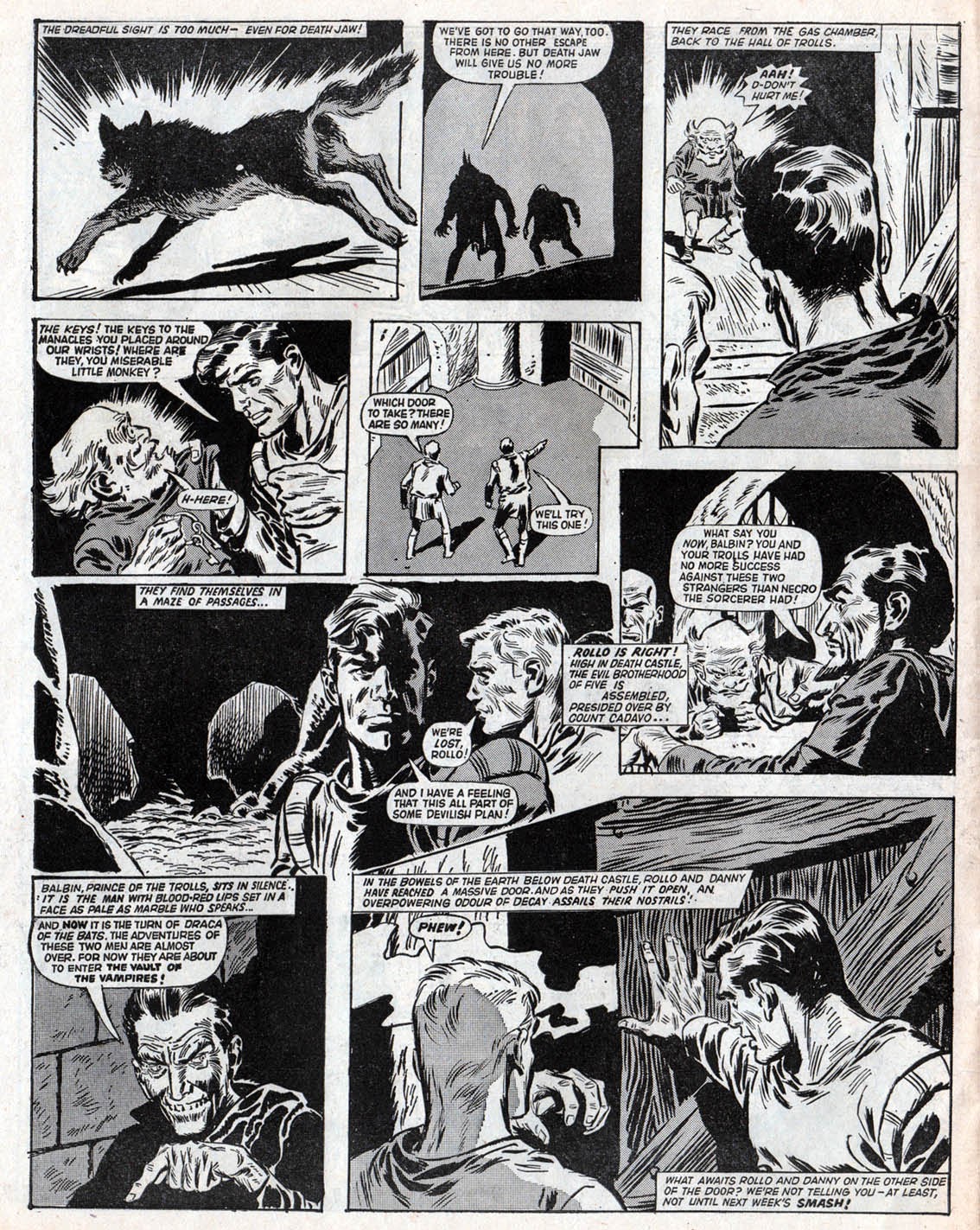 On the back page of this 28 page issue, Grimly Feendish. Artwork by Ron Spencer I think, or perhaps Mike Lacey. Someone ghosting Leo Baxendale's style anyway (but it's definitely not by Leo). 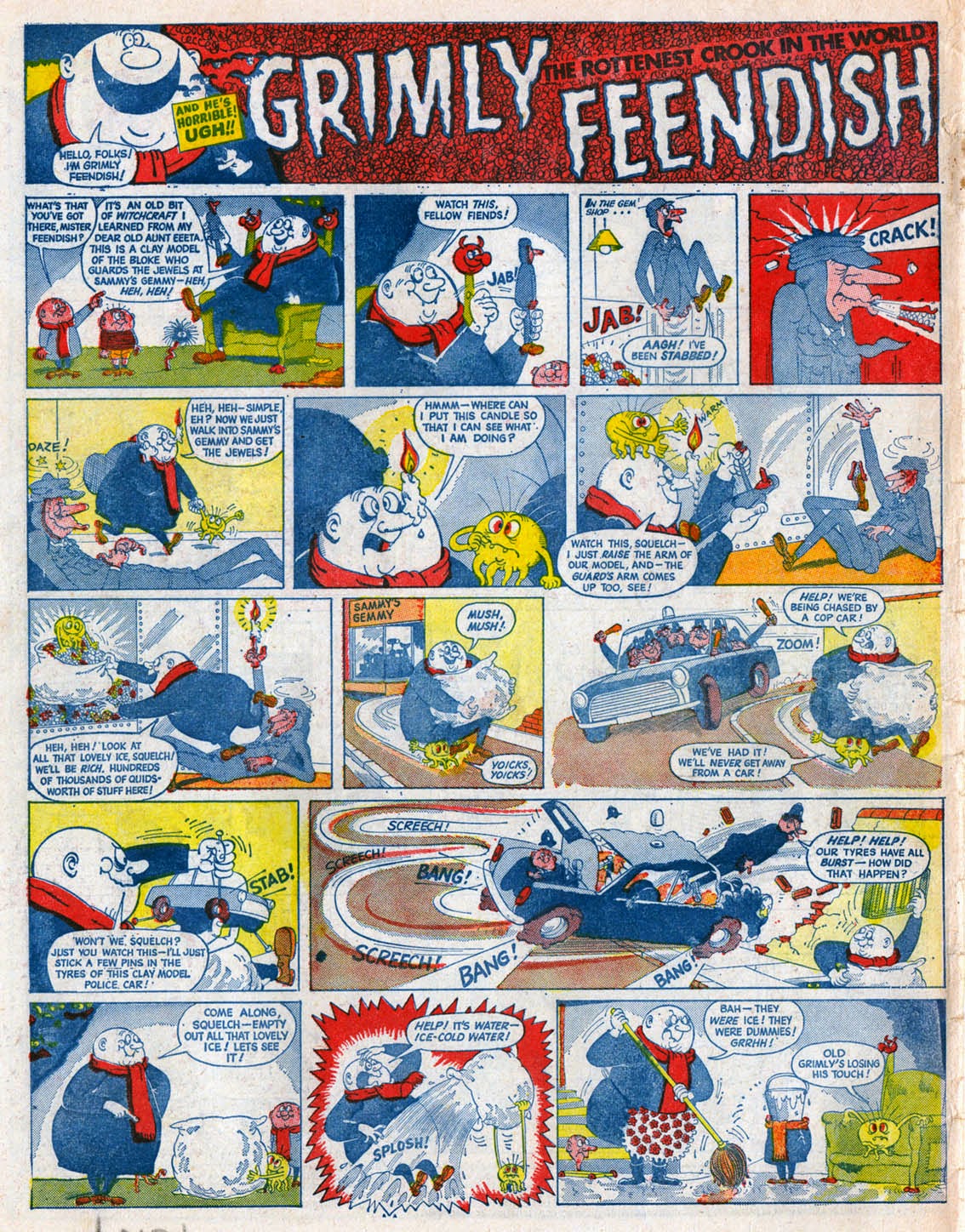 These early issues of Smash! were some of the most entertaining comics of the sixties. Humour, horror, superheroes... it had the lot! I remember having a few issues of The Hornet and Victor around that time and thinking how mundane and ordinary it seemed in comparison. Admittedly, Smash! didn't sell as well as many of its rivals, but the more formalised comics have often been the most successful. Smash! had its own identity, as did its stablemates Wham! and Pow!, and they captured the mood of the times better than most other comics. Comics such as Valiant and Hotspur were better structured and slicker, but Smash! was cooler.
Posted by Lew Stringer at 00:50

Great comics. How well did they sell ?

Sales would have been over 150,000 a week presumably as the cut off point was around that figure back then. I understand Smash! never did as well as the Fleetway or Thomson comics but it must have been the best selling of the 'Power Comics' due to it outlasting it's companion titles.

I was only three months old in May 1966 and until the internet came along I'd thought that Mighty World of Marvel No.1 was the first appearance of Marvel characters in a UK comic.

There's a lot of misinformation on the internet but it comes in useful sometimes. Yes, Marvel reprints have appeared in British comics on and off since the 1950s.

When Mighty World of MARVEL came out in October 1972 it was a real nostalgia fest for us who had loved Smash! and Pow! and so on. Smash!'s short run of Hulk stories was a real eye-opener for me. I had a neighbour who had an American cousin who sent him comics in 1965- that's when I saw Amazing Fantasy 15 and a Tales to Astonish issue called 'The Man in the Ant Hill' which started my Marvel interest, but they were one-off stories. The Hulk was a continuing series! Great idea.

I seem to remember that the previous issue featured an advert for the new strip, along with a quaint caption that said something like 'Arrr! It's the Hulk!!!" (as if he'd just been sighted by Long John Silver through his telescope). Although I was already familiar with the character from American comics I didn't know that he'd had his own short-lived title way back in 1962/3, so I initially thought the stories in Smash! were brand new and produced in the UK. What's more I actually wondered for a time if Stan Lee even knew that Odhams had swiped his creation!

Yes, that weekly dose of stories that were 'To be Hulk-inued' really hooked me. Smash! reprinted the first 6 issues of Incredible Hulk (minus the origin chapter from Hulk 1), then his appearances in FF and Avengers, then his run from Tales to Astonish 60 to 96. By which time Odhams had caught up with the US editions so had to rest the strip.

Hulk returned in 1968 in the pages of Fantastic, reprinting his origin from Hulk 1, then it was straight into Astonish 97 to 101, and Incredible Hulk 102 and 103. Sadly the end of the Odhams comics was looming so that was it until MWOM restarted his saga again in 1972.

Those early stories that Smash! reprinted still remain my favourite Hulk stories. They've moved too far away from the original concept for me these days. The Hulk, an agent of SHIELD? Goes completely against his anti-military, anti-establishment character. Sign of the times I guess.

That's right, Phil. I showed that Hulk ad from Smash! No.15 on my blog a few years ago when I did a post on the weirdly brilliant 'Moon Madness' strip that the Hulk replaced:
http://lewstringer.blogspot.co.uk/2009/07/moon-madness.html

Ahhh...This is the real deal. I'd been a Marvel fan for a while in Ireland.They were so hard to find back then .I was thirteen or fourteen when Wham , Smash and Pow arrived ...Great !!1 I could get the back stories now .My earliest Spiderman was #9[Still got it and many of the first flush...!]Then Tony Roche launched the first fanzine through the letters page in Wham..the Merry Marvel Fanzine. He came to visit me with early issues and Paul Neary artwork and suddenly comics fandom had begun in the UK and Ireland...it wasn't too long before there was that first Birmingham convention....great, great days!!

They sound like great days indeed. I didn't discover fandom and zines until 1976 but I frequently meet up with Mike Higgs and Phil Clarke who tell me about those pioneering days.

Yes Lew ...Great times ...Kirby,Ditko and Lee at their best..Marvel and then power comics were like the scallywag punks on the scene..They caught that same wave that the Stones and the Beatles were on ...As you say a better reflection of the times than all the rest who were still land-locked fighting those pesky Japs and Huns in the second world War.In retrospect, the likes of the Valiant and Boys World carried great artwork but Lee and company were so exciting and new by comparison ...I remember loving the very fact that their colours were more subdued and dirty than everyone else's .......even their paper was punkier and more "street"...[They eventually got abetter printer!!]...but somehow they were jazzier and snappier than their staid competition..wham, Pow and Smash carried that same feel with added bonus of Ken Reis and Leo Baxendale on the humour stories.

Awesome seeing The Legend Testers again after so many years. The series sold me Smash..And when It disappeared so did Smash with me..Favourite story was the Flask of Eterno.