State of the industry 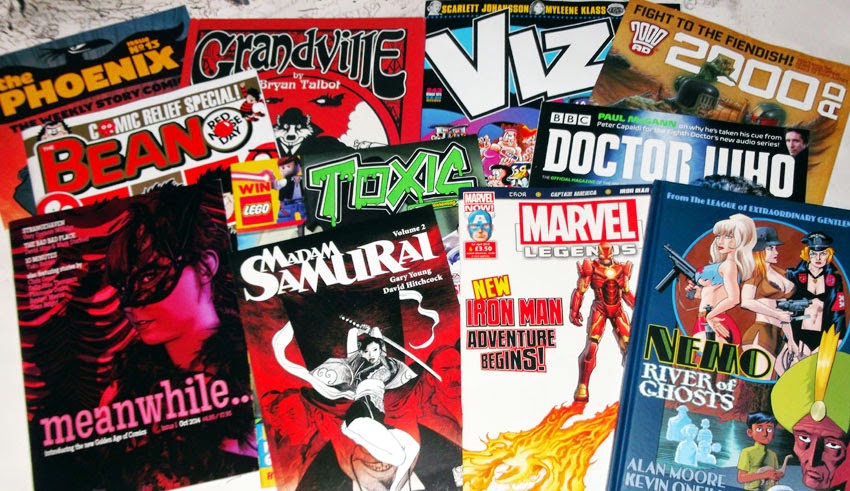 Over on his excellent Down the Tubes blog (the place for UK comics news) John Freeman has updated his post about the current state of the British comics industry. John has worked as an editor and writer in comics for a few decades now so he knows his stuff. It's well worth a read:
http://downthetubes.net/?page_id=7110

Those who complain about today's comics for kids being bagged with toys might want to take note of this bit which explains why:
"This has unfortunately led to many titles being “bagged” and sold as a product unseen by consumer at their sales point, particularly in supermarkets which have insisted on free gifts as part of the package in order for them to stock them. Since supermarkets now cover 40 per cent of publication sales, their demands have not gone unheeded by most publishers in order to secure a slot on their shelves."

Of course there are those who claim that Britain no longer has a comics industry. This is very misleading. It's true that the number of UK comics around are only a fraction of those in decades past, it's true that several UK comics are full of American reprints, and it's true that most titles in newsagents are merchandise-related publications with mostly feature based content that can't really be called 'comics'. However, originated comic strips do appear in some of those magazines (eg: Toxic, Mega, Doctor Who Adventures, Epic!, Doctor Who Magazine, Adventure Time).

Then of course there are the titles that are predominantly comic strips: The Beano, The Phoenix, Viz, 2000AD, Judge Dredd Megazine, Funny Monsters Comic, Commando.

There's also the small press of course. Admittedly most of those titles don't have print runs that could provide a living wage for the creators but nevertheless it's a growing area with some publications that rival mainstream comics in their professionalism. The same applies to digital comics, and in the case of Aces Weekly it does pay its contributors, albeit via a different business model than the up-front page rate. (Contributors receive payments from a percentage of sales related on how much they have in each issue.)

Yes, it's a shame that there aren't the numerous weekly comics of our childhoods around anymore and unfortunately we're unlikely to see those days return. However if we are to appreciate what British comics have to offer us in modern times we have to look beyond the comic shelves of Tesco or the corner shop. The UK comics industry isn't dead yet!
Posted by Lew Stringer at 22:45

I think every comic enthusiast should read John's post on down the tubes.

Personally, I think the UK comic field isn't THAT bad right now. Sure, there used to be more in the past BUT, well.. lets figure this out.. there were less other things in a way, there were More (or even the same) level of 'merchandise-related' publications (Radio Fun, Film Fun etc were mostly tie-ins to for Radio and TV stars.. could debate the merchandise term though.. Tie-ins are sometimes done to help promote the product, sometimes done just to get money from the fans of the product.. Using TV, Radio and Film stars mostly were a way to cash in on the fame of the stars more then give promotion to them, but I bet it didn't hurt.

A lot of old ones still reprinted US (or sometimes Other European) products.. we have Asterix (Little Fred) was reprinted in UK comics, Of course we have Wham, Pow etc, Like with US comics at first, didn't a lot of UK ones often taken Newspaper strips and reprint them? so not really a HUGE bit there..

A mixture of Articles, Comics and 'activies' is also nothing new.. I love things like the 'board game' two page spread. the semi-educational comics showing how a character might have been like 100 years ago etc. could debate there is MORE now in some comics, but with a 'slow' fade into the style, can you pick a point when it started?

Bagged Toys... tis tis.. well, Bagging is partly due to people stealing, and partly due to size to keep them with the comic, but comics have been having free gifts like that for YEARS.. you even did a nice bit about them, including free gifts in UK comics in the 1930s.. in the 80s and 90s, I think there was more a change to have unrelated stuff (like a pack of sweets.. that always annoyed me.. I would much prefer some cheap rubbish that is TIED INTO the comic, then something completely unrelated when I was a kid... and the same now really ^_^) which was tapped on but stealing was quite common and the tape, of course, damaged the comic covers. changing to bags doesn't fully reduce stealing but I think it helps AND it means comics are left in a better state.

reminds me of another thing I hated.. Pull out Posters.. Take, Sonic the Comic for example. AT first, they were good. they weren't really pull out as special inserts printed on higher grade paper. Then it became two page spreads of the normal comic that I hated to take out cause often, it wasn't just adverts or something on the back but a page of the comic strips ¬_¬ then it became very cheap 1 page using some stock art done to death.. Does anyone remember Ever Pulling out Marvel Pinups from early titles?.. I remember when I first got a scanner. one thing I did was Scan and print out a couple of some posters so I can put them on my wall and keep the comic ^_^ (in Fact, I have a great Bob Laughlin (US artist) poster which more then use one of the original 80s ones I have, I made a copy to pin on my wall. great undervalued artist and write.

a lot of the numerous weeklies in the past didn't do too well and were mostly "Oh, Beano is popular, lets do OUR version".. some better then others. A lot of the modern ones are much bigger then the old ones.. so you get a few in one really. If we look at page count.. are there even LESS out now?

Yes, sadly there are definitely less pages of comic strip being published now per month than, say, 30 years ago.

You're right that media-related comics have been around for a very long time but they didn't dominate the shelves as much as they do now. Of course that depends on which era you're talking about.

However when all is said and done, the British comics industry is certainly not "dead" as some proclaim. Admittedly sales are far less than they used to be but circulation has been falling for 60 years at least. Publishers can no longer afford to simply rely on newsagents for their sales, so we've seen the growth of graphic novels in bookshops and online sellers.

The situation isn't perfect of course. Far from it. We can't afford to be complacent. One thing I'd like to see is newspapers doing more to promote the benefits of comics, and perhaps featuring more strips in their papers. But that'd cost them money so it's unlikely to happen.

So supermarkets are to blame for all those bagged comics full of tat, very revealing. My local Tesco doesn't sell 2000AD - I know because I've looked. They seem to sell everything EXCEPT 2000AD including that new Dr. Who comic.

I'd covered the free gift reasons here before but it was worth bringing it up again. It may also explain why your Tesco doesn't sell 2000AD. Mine doesn't either. No free gifts bagged with it.

You'll find 2000AD in comic shops though. Are there any near you?

Lew, my nearest comics shop is about 20 miles away and so is my nearest WH Smith's. Reading your post made me think of the same thing as to why Tesco doesn't sell 2000AD - but I did see the new Doctor Who comic and that wasn't bagged with free gifts so I don't get it.

Could be a number of reasons. Perhaps Rebellion don't think it's worth paying Tescos thousands to stock 2000AD when most of their readers can get it elsewhere.

I'm surprised none of your local newsagents stock it. The corner shops supplied by Smiths around here have 2000AD every week. (As you probably know, Smiths are a distributor as well as having their own branches.) Perhaps you could order it from your newsagent?