The art of Bob Monkhouse 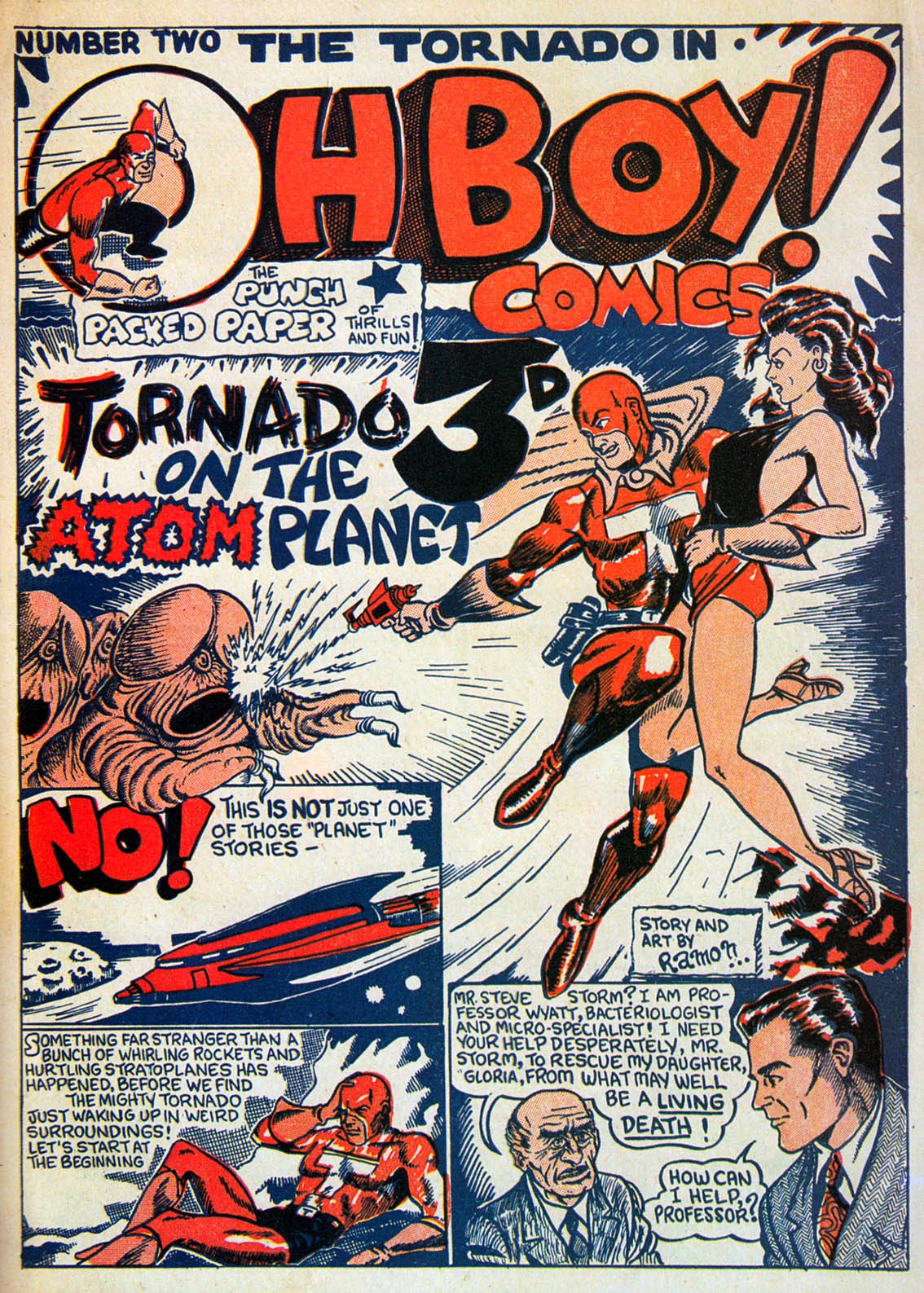 The entertainer Bob Monkhouse (1928 - 2003) was well known for his numerous TV, film, and radio appearances, his stand up act, and as a game show host, but at one time he was also an accomplished cartoonist and comic artist.

In the 1940s and 1950s Bob wrote and drew various strips, a few for the big publishers such as DC Thomson, but mainly for the smaller independent outfits that thrived at the time. One of his best known works (some might say notorious) was the issue of Oh Boy! Comics launched in 1948 by Paget Publications (shown above) with its phallic aliens. I think there'd be a public outcry if that appeared on newsagent's shelves today but Bob apparently got away with it back then. Using the alias 'Ramon', Bob not only scripted and drew this strip he also lettered it and designed the logo. 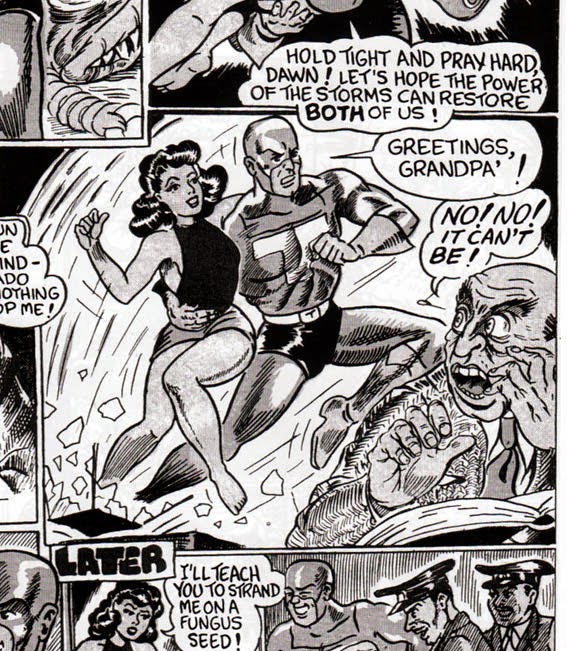 When he was at school Bob's classmate was Denis Gifford, who of course would become a comic artist and author in his own right. They even set up their own comics company, Streamline, for a short time.

As we know, Bob's career took off in other directions with him writing gags for people such as Max Miller and then becoming a comedian and performer himself, first on radio, then on television, and acting in several British movies including Carry On Sergeant. This left him with no time to pursue a career in comics, although he retained his enthusiasm for comics all his life, collecting comics and original artwork. 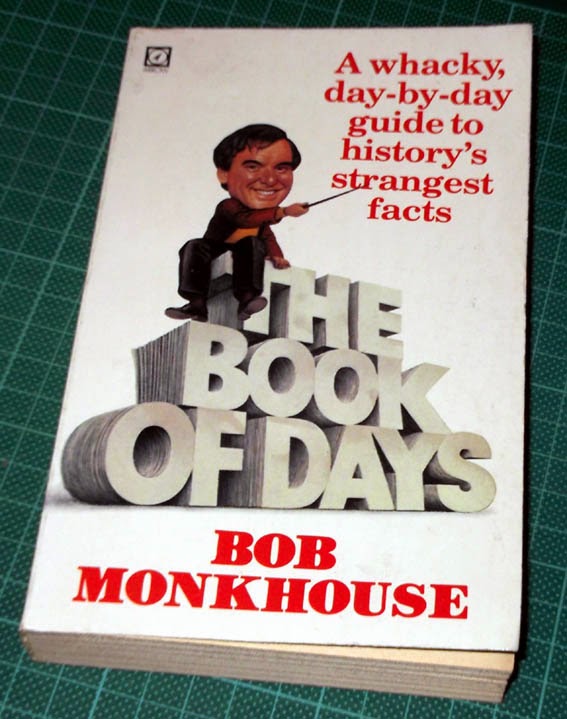 I always felt it was a shame we didn't see more of Bob Monkhouse as a comics artist, but in 1981 Arrow books published The Book of Days, - 'A whacky day-by-day guide to history's strangest facts'. It was written by Bob, and also illustrated by him, proving that he definitely still had his artistic talent. Here are a few of the cartoons that appeared in the book. Click images to see them larger... 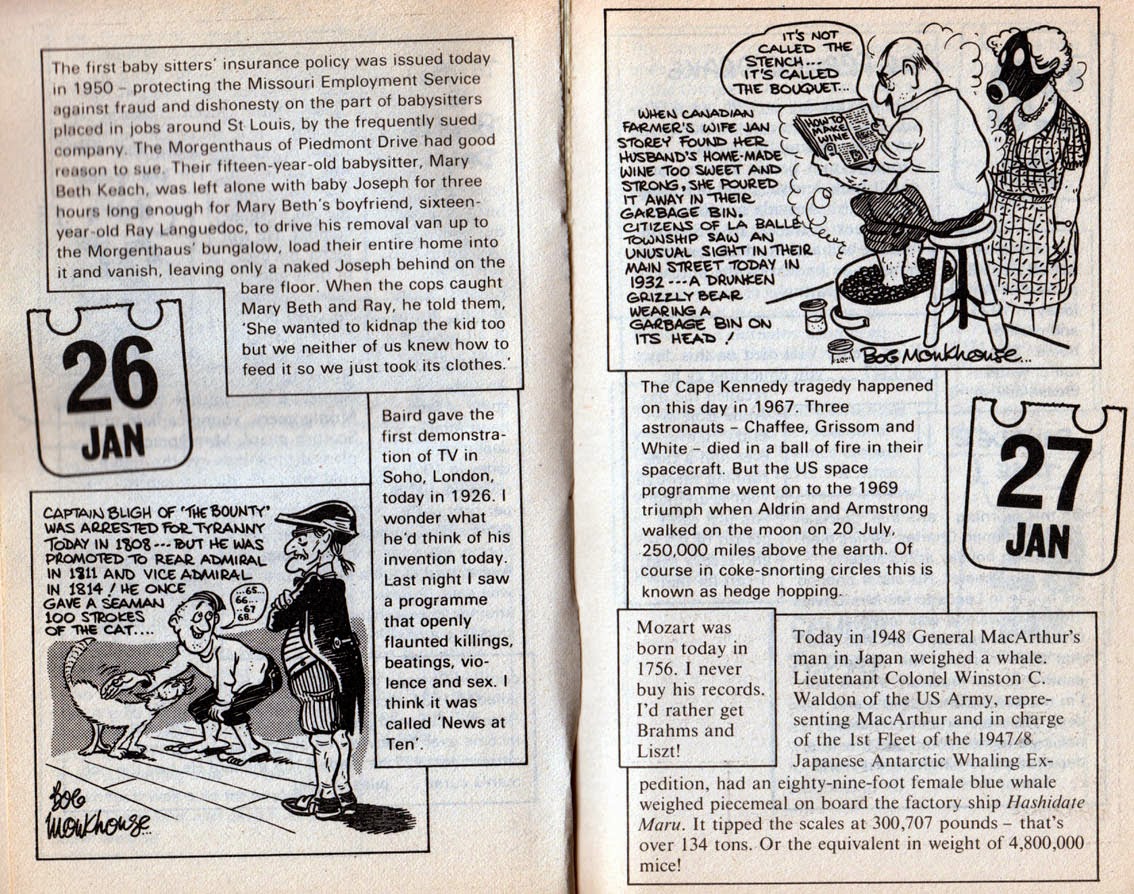 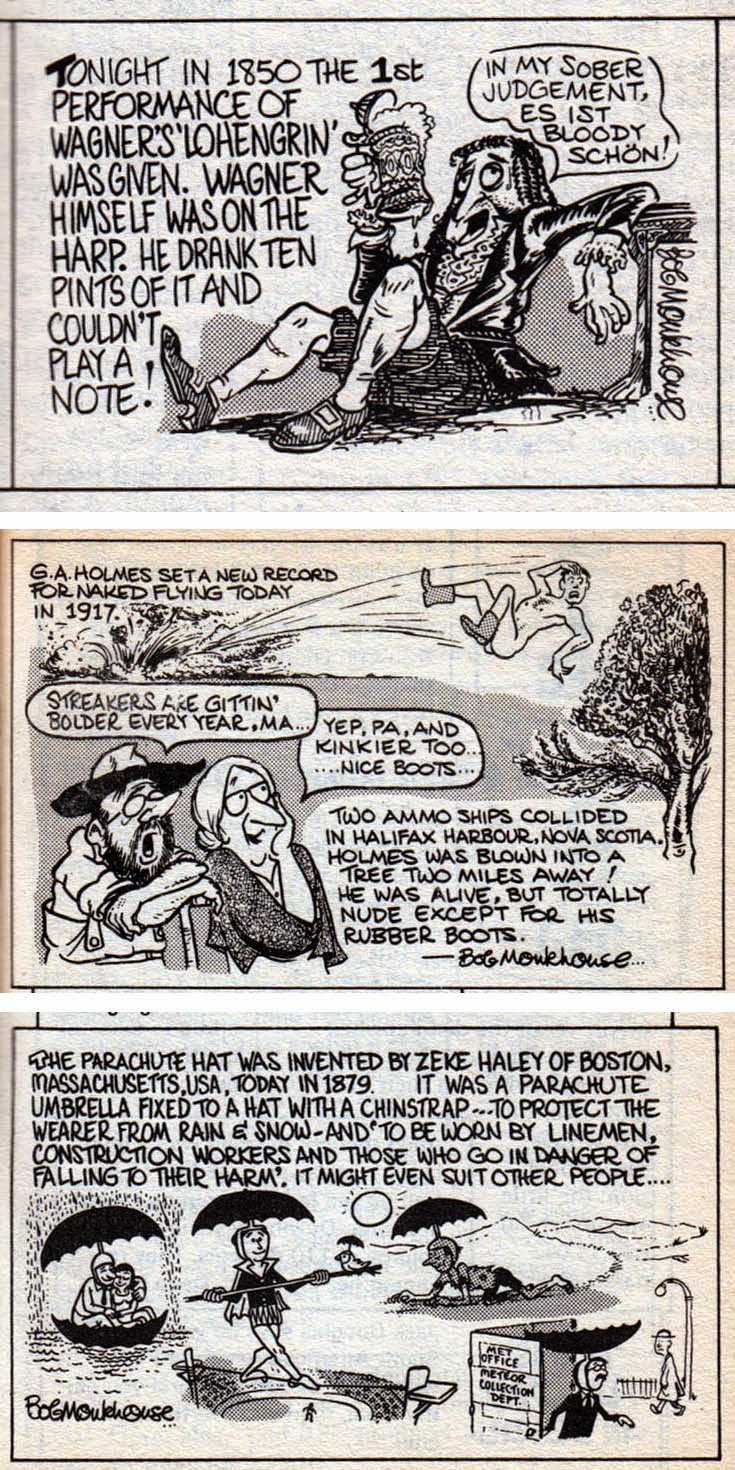 In this age of celebrity status being given to people just for appearing in a reality TV show I think we appreciate the stars of the past more than ever. Bob Monkhouse was a fascinating and truly multi-talented person, and as a comics artist and enthusiast he was also 'one of us'. 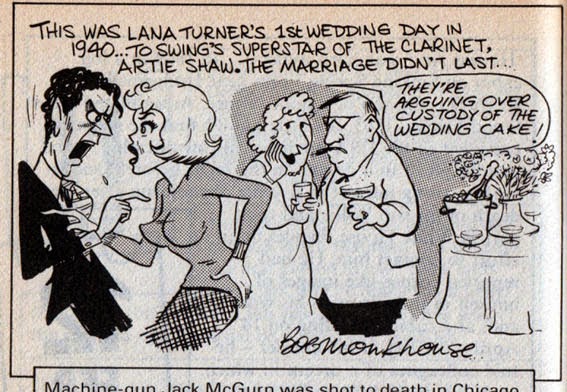 (The cover of Oh Boy! Comics at the top of this post is scanned from the book Super-Duper Supermen by Denis Gifford. The book Great British Fantasy Comic Book Heroes (reviewed here) reprints the entire 5 page story.) 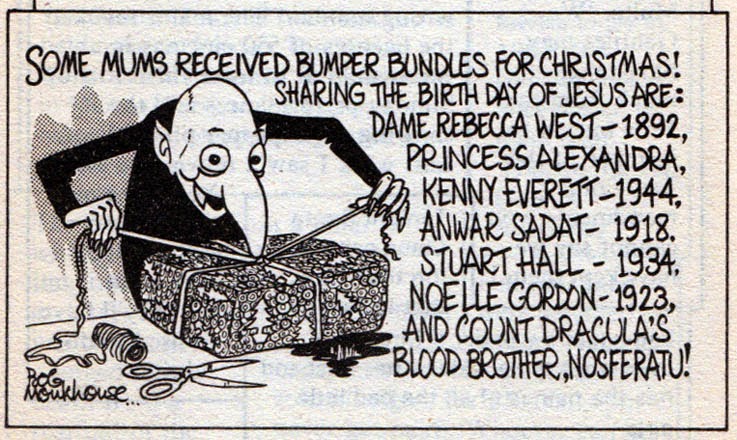 Loved that guy and knew he did some art, but these pieces have really opened my eyes! Great talent and missed.

Hi Mark! Yes, a very talented artist indeed. I remember that he also painted some of the huge cartoons for the targets seen on The Golden Shot, which he hosted.

hi Lew . There's a very revealing documentary about Bob out there..maybe even on youtube...He was a complex fellow alright.Once you got past that smarm he revealed himself as a multi-talented artist.He appears to have been technically very able too.His brushwork was very lively too. Is there a book in any of this?I never noticed the phallic aliens until you mentioned them ...now i can't believe he got away with it in the buttoned-up 1950's..Ha ha...

Thanks for sharing Lew, I didn't realise he was such a talented artist, lovely artwork Ian

Paddykool, yes I presume you're talking about 'The Secret Life of Bob Monkhouse'? An excellent documentary indeed. It would be good to see his strips and cartoons in a book, although he modestly downplayed his artwork in his autobiography 'Crying With Laughter'. The smarm was just part of his act.

As for the phallic aliens, Denis Gifford used to bring those to everyone's attention at comic conventions in the 1980s when he included them in his slide show presentations about old comics. A jokey dig at his old school mate.

Colin, Tory he may have been but he was still a good artist and entertainer, and a nice bloke according to those who knew him.

Yes, Lew . I believe in separating the "talent" from the performer. If we dug into the personal foibles of any of our artistic, musical or literary heroes , we'd soon find out that some of their core values didn't jive with their talents.Many will have feet of clay...mere mortals.You could say that Picasso was a misogynist , for example...or pick a musical hero and see how his life stacks up against his music.I would n't side with bob's politics , for example, but the talent is there for all to see.

Agreed Paddykool, unless the person in question has done something really vile, and that certainly didn't apply to Bob Monkhouse.

And let's not forget the ocd collections he amassed, like every TV and Radio Times, complete with his handwritten corrections when programmes ran late, his racks of videos of TV programmes and, of course, his documentation of jokes! - all preserved in his private "museum", I believe?
Just HOW did he find the time to do all that AND work for a living as well? Beats me!

I suppose like many performers he had times 'resting between jobs' where he'd have time to do all that John. Not that Bob seemed to be the sort to rest. He seemed quite a driven person who'd apply himself to his hobby 100% whenever he could.

I don't agree with his politics but I admire his enthusiasm and knowledge about comics, film, TV. He was obviously very dedicated and interested in the genres he worked in, which many performers aren't.

I've just remembered that about 20 years ago or more Bob Monkhouse and Denis Gifford wrote/presented a radio documentary on Radio Fun comic. I have it on tape somewhere.

A lot of celebrities have publicly sided with political parties of their choice to promote them though haven't they? I imagine Noël Gallagher and other celebs might feel a bit sick that they hung out with the reprehensible Tony Blair now for example.

This post is solely about the artwork of Bob Monkhouse, and I'm pleased that it's proven very popular (over 700 views so far). Apparently a lot of people didn't know Bob was an artist.

He also illustrated a book by Willis Hall about (I think) sports back in the the late seventies.

Thanks Jim. I didn't know that.

Wow, thanks for posting this up Lew. I'd no idea about this whatsoever. I was always a fan of Bob as a child, always thought he was very funny. I've also got very clear memories of his as the very best relief presenter on The Big Breakfast with Gaby Roslin when Chris Evans was off. Even my mum didn't mind watching it that week!

I'd forgotten about that, Phil. I've never watched a lot of breakfast TV but I do recall seeing some of the ones Bob did.

Nice to see the Bob Monkhouse art - it’s the sort of think you normally read about or see mentioned, but I’m not sure that I’ve ever actually seen a piece reproduced before.
An example of his slightly later work appeared in a book (actually more like a booklet) which came out at the time of the Glasgow Garden Festival in 1988; celebrities had been asked to provide a picture of their ideal garden, and Bob’s was a very accomplished cartoon pin-up, with what I remember as a self-caricature, of him as a garden gnome. I had a copy, but goodness knows where it is now…

Thanks jock. Very interesting. I wonder if there were other obscure things like that he illustrated? He obviously enjoyed drawing so there probably are.

Colin, why do you keep removing your own comments after people have replied to you?

Those aliens look rather 'Viz-like' in their head design.

Hey guys I found an old autograph book and inside is box signature and a self caricature of him in an raf uniform.brilliantly drawn may have been 1940s

Thanks, Lew! I grew up watching Bob Monkhouse, but I had no idea he also did artwork. Thanks for posting!

Hello. I own couple dozen original cartoon art from WW2. Mostly British artists. Have not been able to positively ID some obscure ones. morganwallace @ gmail