This week, Thunderbirds reaches its 50th anniversary, with September 30th marking half a century since the first episode debuted on TV a lifetime ago in 1965. As you may know, there are three brand new Thunderbirds episodes currently in production, funded by a Kickstarter campaign that many of us contributed to. These new episodes (not related to the new Thunderbirds Are Go reboot) are using the soundtracks from adventures that had only been released in audio form in the 1960s, and and now being visualised by a team who have meticulously crafted puppets, sets, and models based on the original series. The first clip from an episode has just been released on You Tube. Here it is:
http://youtu.be/2MstQXIIQTM

Fifty years ago this week, this is the issue of TV21 that was on sale when the first Thunderbirds episode was screened. Issue No.37, dated October 2nd... 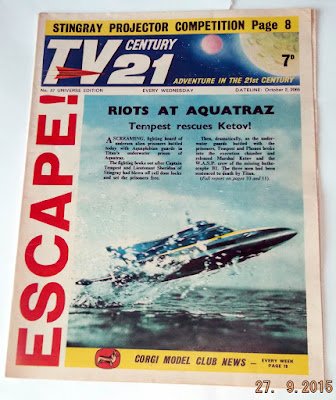 Despite being the official comic of the Gerry Anderson productions (A.P. Films) there's no mention within its pages of Thunderbirds at all. However, the ongoing Lady Penelope strip was still running of course, having been a regular strip since issue 1. Now, for the first time, readers would also see her on TV in the first Thunderbirds episode Trapped In the Sky and the mystery of why TV21 had featured her in the comic would be solved. Here's the Lady Penelope strip from this week in 1965... 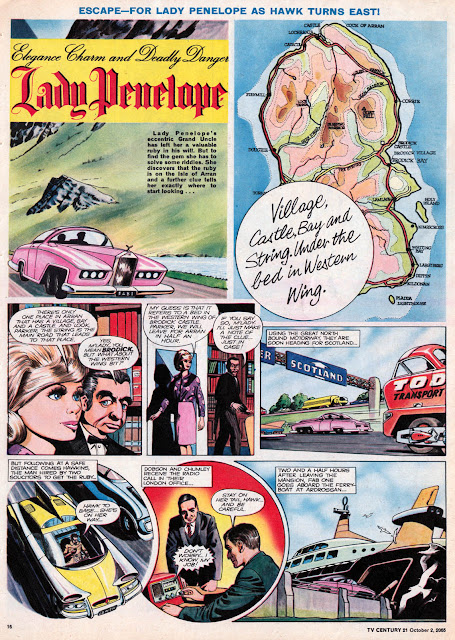 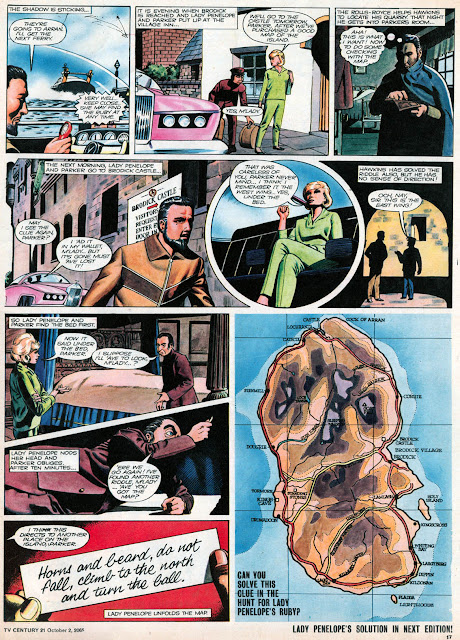 By January 1966, Lady Penelope would spin off into her own successful comic and a regular Thunderbirds strip would begin in TV21. (See this old post here plus this post on Thunderbirds in the comics here.) 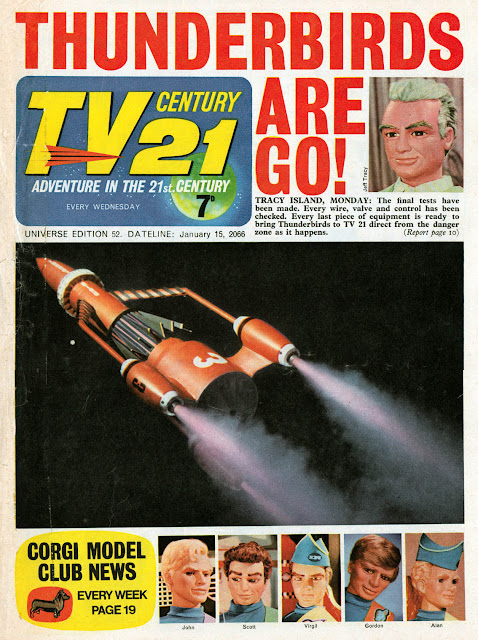 Thunderbirds became such a huge success and part of our culture. I still clearly remember anticipating that first episode from the moment it was announced in the Daily Mirror that Gerry Anderson was making a series that would "be like Supercar, Stingray, and Fireball XL5 rolled into one" (or words to that effect). I was six years old at the time and mistakenly thought it meant the new show would team up Supercar, Stingray and Fireball! (What a show that could have been!) I certainly wasn't disappointed with what Thunderbirds actually turned out to be, though.

Fifty years later (and it definitely does feel like fifty years) there's a new revamped Thunderbirds Are Go series on CiTV, with related merchandise (and soon a new comic) in the shops, plus the new classic Thunderbirds 1965 in production to be released on DVD next year. A remarkable achievement for a part of pop culture that has entertained millions across the world.
Posted by Lew Stringer at 17:53

I have a very vivid memory of that issue of TV21 (like you, I was anticipating Thunderbirds but unfortunately missed the first episode) and that Lady Penelope story.
I can't remember where I first heard of Thunderbirds but I do know everyone in our street and at our school were talking about it that summer.

It was a phenomenal success and definitely the biggest thing that year for kids. The toys were must-have items too. Thunderbird 2 (the plastic one, not the Dinky die cast) was very hard to find as it sold out so quickly, but my mum managed to get me one in the end. I still have it, along with TB 1, 3, and 5. (I must have thrown out TB4 long ago, as it broke.) I'm not really a toy collector but I have hung onto a few things out of nostalgia.

The TV Century 21 you show there looks to be in remarkably prime condition for its age. Is it a facsimile or restored in some way? Assuming it is yours.

Good to see that Sky have marked the anniversary with a Supermarionation documentary on Sky Arts. Catch it on Wednesday at 9pm.

"This week, Thunderbirds reaches it's 50th anniversary"
The London Live TV channel now has a trailer that has a caption including "it's" (which should only mean it is or it has) as the possessive form of its, so I've decided to give up my pedantic correction of this as from now. So please Lew, don't make the alteration.

personally, Thunderbirds was never my favourite amount the Anderson set but that's not to say it wasn't good.

The model work looks great on the fan version.. movements and some designs are slightly off but nothing of any note. still fantastic work. as for this reboot series.... erm.. it's better then the live action film ^_^;

Nothing could be worse than the live action film. :)

Big D, I know it's a poor workman who blames his tools but my iPad has an annoying habit of auto 'correcting' the word 'its' to 'it's' every damn time. My fault also for not noticing it though. I'll go and correct it.

Howard, yes all the comics shown here are mine unless stated otherwise. (I don't pinch scans from other people's blogs etc uncredited like some do.) Most of my TV21 comics are in nice condition like that.

PS: No, it's not a facsimile or restored. Just well looked after and handled with care. Paper survives very well if stored out of the light and damp.

God century 21 was good. I had an annual of this as a kid. Still, they had a good set of source material. I inherited alot of my dad and uncles quality christmas books, James Bond, Torchy the battery boy, Eagle, century 21, havent got much left though! Most of its gone!

One of the many strengths of TV21 was that it treated its readers with intelligence. The sort of comic that helped to raise the literacy levels of its readers instead of dumbing down to the youngest end of its target audience like many mags do today. TV21 was a huge success on the strengths of its stories and artwork, and thankfully didn't put off anyone over six with 'activity pages'. It's a pity there's nothing like that on the newsstands today.

That's why I love the old Eagle mags and annuals. I felt they empowered kids. With articles about jet engines and board games and projects and the like, Eagle never said 'no, you're a kid', it said,'if you think you can do it, go and do it! Make that kite, make that glider!' we felt things were possible. And we felt like someone was keeping us up with current affairs. Dan Dare was ok too!

Yes, they had a good balance of strips and features. Of course the readership was older then, and kids tended to read comics into their early teens, which they don't now. Comics became 'younger' for modern generations because older children had already lost interest in comics, but I still think there's a gap in the market between Beano and Marvel reprints or Manga. The gap is unlikely to be filled now unfortunately as the retail trade are only interested in 'brands', not new experimental comics.

I think there is room for an aspirational, project and current affairs product for young adults, but it will be on youtube rather than in a magazine! Also, health and safety wouldnt allow some of the stuff considered normal for young lads in the past.