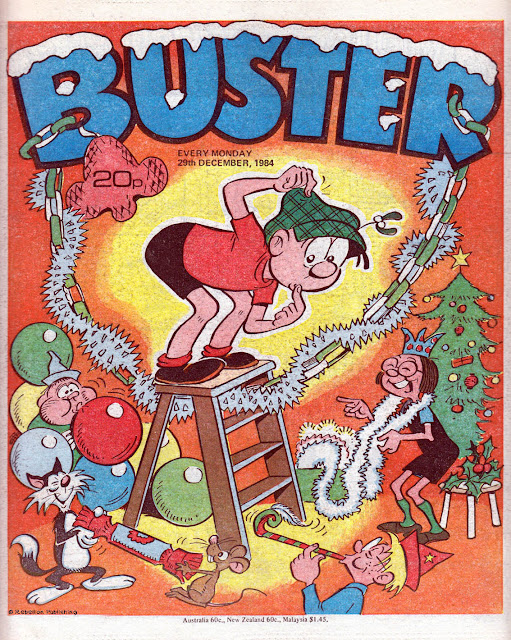 By 1984, Buster was still printed on increasingly flimsy newsprint but it contained some good stuff. This festive cover by veteran artist Reg Parlett is simple but effective. I wonder how many Christmas strips Reg drew in his long career that stretched to about 60 years?

Inside, The Leopard from Lime Street continued to be one of the most popular British superheroes around. I think the art was by Mike White by this time... 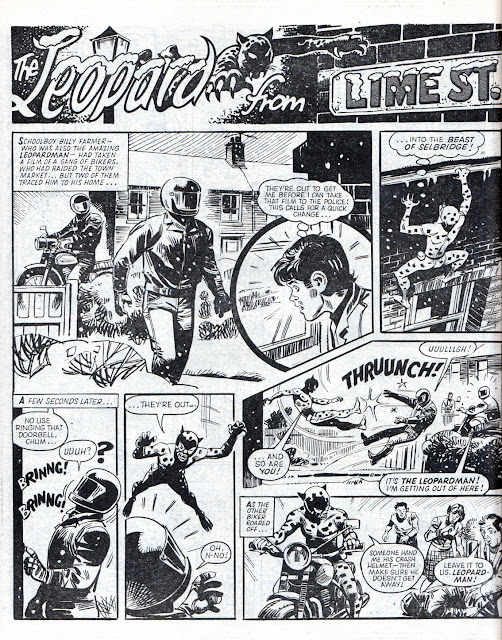 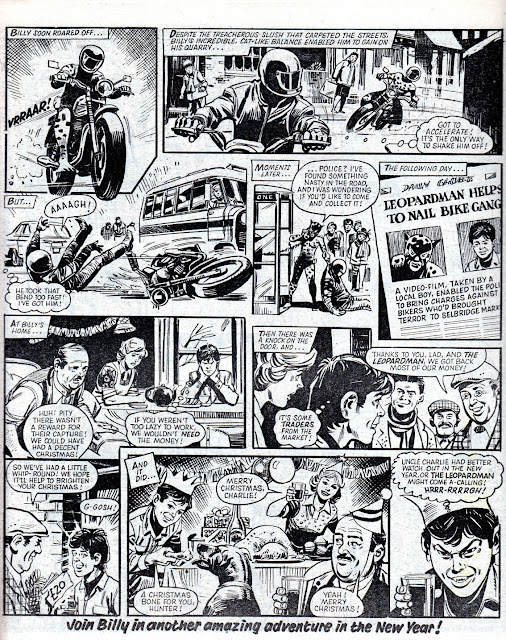 School Fun had merged into Buster months before, and appeared as a separate pull-out section, akin to Chips in Whizzer. The School Fun Section only had 12 pages though, (leaving Buster with 20) so it wasn't an equal 50/50 split like Whizzer and Chips. Artwork on School Team was usually by Vic Neill but this is a fill-in by Doug Jensen. (Thanks to Andy Boal for his observations.) 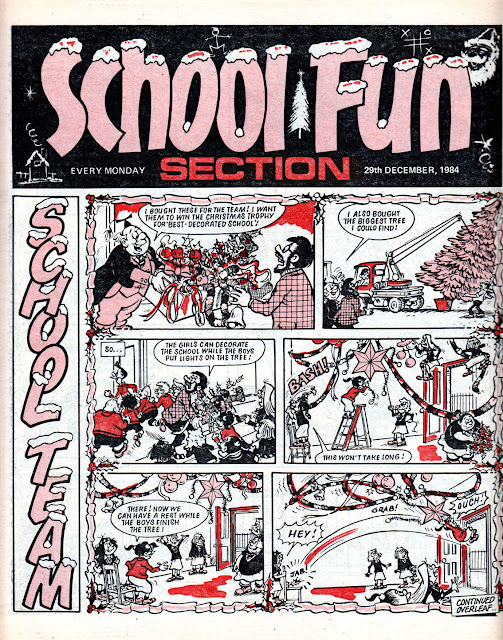 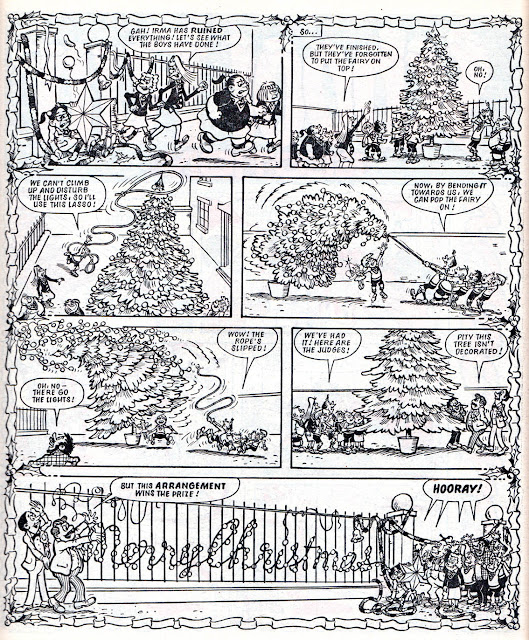 School Belle was another strip that had joined the comic from School Fun. Art by Tom Paterson... 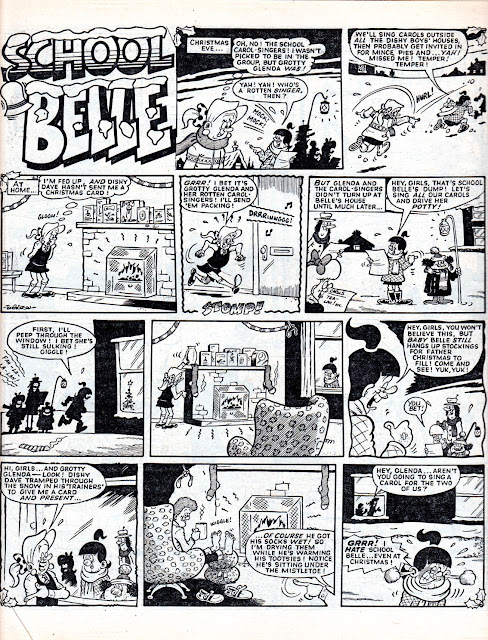 A festive Faceache page by Ken Reid, even scrunging at Christmas. 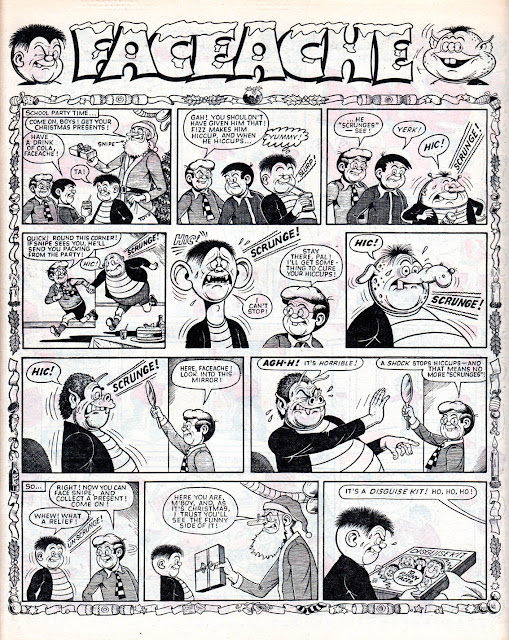 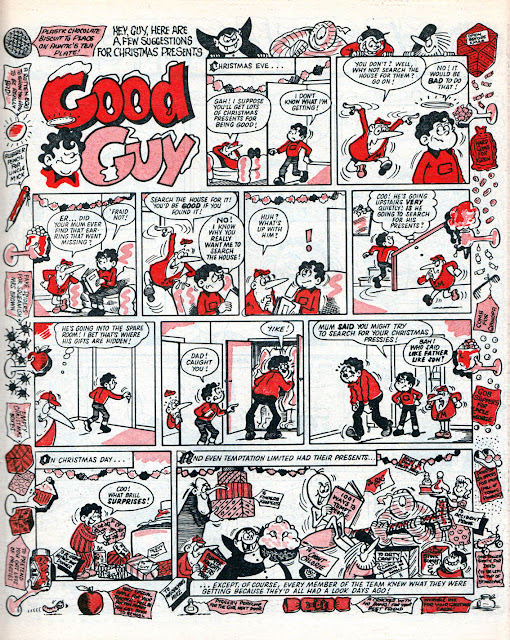 On the back page, Buster's Diary, with Reg Parlett again on the artwork, and the story ending with the traditional slap-up feed! 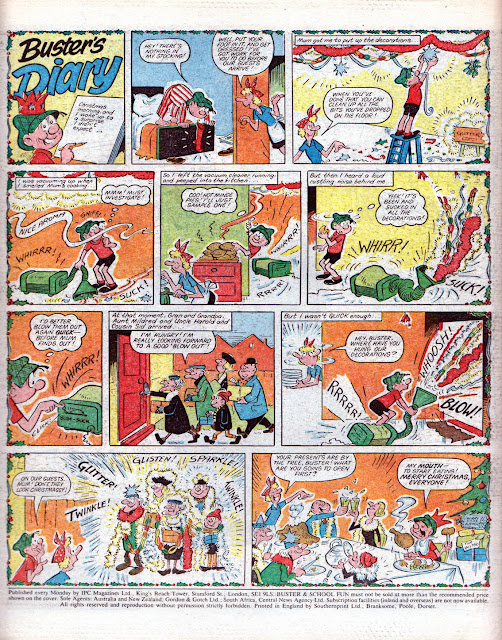 Another Christmas comic tomorrow. Or maybe even two! Stay tuned!

I do love a slap-up feed! Too many I've had, if truth be told! Thanks again Lew, for some excellent yuletide frolics

Thanks, mj. More to come!

Remember this issue...awww the memories...
I love Reg's Buster...so warm...and always lots of food rewards at the end!

Reg Parlett was certainly a great humour artist, wasn't he, Peter? Every page of his had an uplifting feel to it. A king of comics.

1984 was a bit late for me to be reading buster. I didn't realise it was still so good. How làte were reg parlett and Ken Reid still working on comics

To me Reg was the definitive Buster artist as well as one of the favourite all-time artists in Fleetway/IPC. Did he ever draw for DCT?

Ken Reid worked until he passed away in 1987. Reg Parlett was still drawing until the late 1980s at least. He passed away in 1991. As with actors, comic artists don't often retire if we enjoy what we're doing and are able to continue.

I don't think so, Sid. Reg's style was very much in the AP/Fleetway/IPC house style and I think he worked exclusively for them.

Now I’m looking at it, that episode of the School Team is by Doug Jensen. Vic was their regular artist (and original artist, if I remember correctly), but the giveaway is Doug’s variety of nibs.

Really? Ah, interesting, Andy. Thank you. I don't think I've heard the name Doug Jensen before so I'll update it with that info.

He was best known as the original artist of Store Wars, but also drew Country Cousin.

We talked about it years ago on Comics UK, but it was Niblet who got the evidence at http://cheekyweekly.blogspot.co.uk/2015/03/doug-jensen-not-doug-goodwin.html

I originally misremembered it as Goodwin. Oops!

Very interesting, Andy! Thanks for that info!