The Dalek Audio Annual is coming this Christmas! 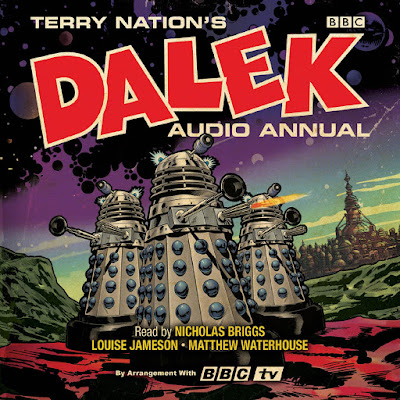 My favourite annual of the 1960s was The Dalek World, which I had on Christmas Day 1965. I poured over its pages, reading it and re-reading it countless times. Subsequently, due to that, and the Doctor Who projector set I had the same day, I often associate Daleks with Christmas.

It's been many years since any Dalek annual appeared but this December will see the release of The Dalek Audio Annual, with a fantastic cover in the style of those bygone books. The audio CD will feature readings by Doctor Who cast members Nicholas Briggs, Louise Jameson, and Matthew Waterhouse of stories from Dalek Annuals of the 1970s.

It sounds like a nice item that'll be perfect for Christmas Day (and hopefully there'll be a Christmas episode of Doctor Who that day too). You can pre-order The Dalek Audio Annual from comic shops or from Amazon at this link...
https://www.amazon.co.uk/Dalek-Audio-Annual-stories/dp/1787533670

Email ThisBlogThis!Share to TwitterShare to FacebookShare to Pinterest
Labels: Daleks

Cheers Lew! Ordered this and cannot wait until it arrives :)

I too had the Dakek annual and the Give a Show projector that Christmas. Still have both (but don't think the projector still works...)

I think my projector stopped working too, but it might just need a new bulb. I have some spare 1960s bulbs somewhere, if they still work!

I share you association of Daleks and Christmas. Most early Dalek stories were broadcast in November or December so they were very visible in the Christmas periods of 1963 through 1967.

And it's not just us. Christmas 1964 had seen the release of "I'm Gonna Spend My Christmas with a Dalek" by the Go-Go's. An earlier band from Newcastle, not Belinda Carlisle and her chums.

I didn't have a record player until my 15th birthday so I'm glad to say "I'm gonna spend my Christmas with a Dalek" was never amongst my purchases. I have heard it since though. Dreadful! :)