The Magic of Roy Wilson 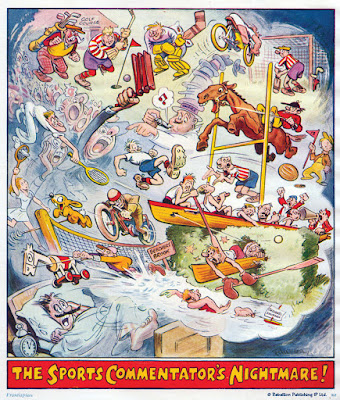 Comic Scene No.4 will be out this Wednesday, 23rd May, and one of the many articles inside will be a four page retrospective on the artist Roy Wilson that I've written.

Roy Wilson was one of the most influential humour artists in comics, and the feature is illustrated with various panel and covers of his that I scanned from my collection. One piece of artwork I supplied that wasn't used was The Sports Commentor's Nightmare, the frontispiece from the Radio Fun Annual 1952. Rather than let my scan go to waste I thought I'd post it on my blog today for you all to enjoy. (Click on the image to see it larger.) What a fantastic cartoonist Roy Wilson was!

Don't miss Comic Scene No.4 on Wednesday, to read my article (and many other features). If your shops won't stock it (their loss!) you can order it directly from the publisher here:
https://getmycomics.com/comicscene

I am surprised that no-one has commented yet.

A brilliant artist in my book who simply captured the spirit of drawing comics.

Sadly my posts on the comics of that era always receive less hits. Most fans are only interested in their own nostalgia, which I think is a shame. It won't stop me doing golden age posts though.

I think it isn't quite how the subject would be addressed now; there are fewer actual jokes. Actually, it implies that one person (whom you've called a "sports commentor" incidentally, which I didn't notice at first viewing either) has to report all of these events for radio, which must be cheaper than having special reporters for each, but not as good. If this happened at the time, it may have been noticeable to listeners.

The large "Ally Sloper" panels you've shared have a lot going on, but you have to study the scene carefully. I feel rather spoiled for this by sequential-art comics where each frame usually represents one development in the story - although of course the background, if there is one, conventionally is all hand-crafted too and worthy of appreciation.

And just now there's a royal exhibition in London of Leonardo da Vinci cartoons... I'll just say that it says online "no need to book tickets" (which are £13.50 by the way). My aunt Dolly would have done it for nothing. :-)