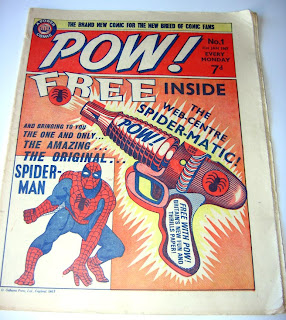 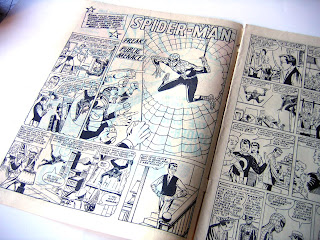 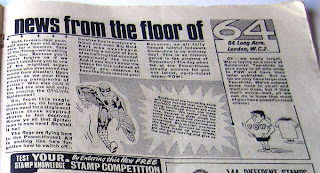 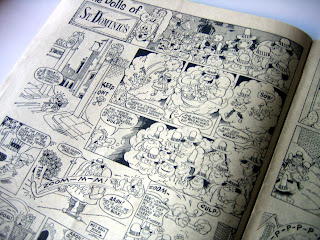 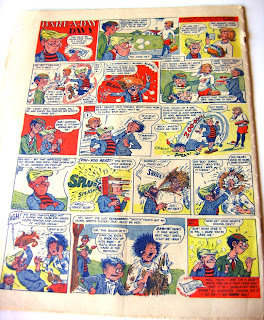 The Brand New Comic for the New Breed of Comic Fans - Strap line on the cover of Pow! No.1 published Saturday 14th January 1967.

Forty years ago today, following the success of Wham! and Smash!, Odhams launched the first issue of Pow! across the UK. For the tens of thousands of British kids who bought it, myself included, it was our first exposure to Spider-Man, the lead strip in the new weekly. That's hard to believe today, now that Spidey is the megastar of movies, games, and countless items of merchandise, but back in 1967 that wasn't the case.

Back then, unless one had seen the imported Marvel comics that some newsagents stocked, the Odhams comics provided the perfect introduction to Marvel superheroes. (Although I suspect the main reason for including US reprint was to save Odhams money on originating new material.) Therefore The Incredible Hulk thundered into Smash! in 1966, closely followed by The Fantastic Four in Wham! and (presumably because it had a smaller budget) Pow! featured not only Spider-Man but also Nick Fury Agent of S.H.I.E.L.D.

Like its companion papers, the rest of Pow's contents were a mixture of Beano-style funnies and Valiant-style adventure strips. Alongside the Marvel reprint, this made for an interesting and varied package. (A formula sadly abandoned in the 1970's when IPC segregated adventure and humour comics into their own titles.) The free gift of that first issue was a cardboard gun that shot cardboard pellets; a style of freebie that Odhams excelled in.

Looking at Pow! No.1 today, forty years later, it's clear that design-wise it's not as slick as the magazines of the 21st Century, but its strips had an energy and anti-authoritarian irreverence mainly lacking in modern comics. In the St.Trinians inspired Dolls of St.Dominics schoolgirls throw their teacher into the river and, tooled up with daggers, mallets, and axes, chase the errand boy out of school with cries of "Lynch him! Get the oil boiling!". Whilst in the kid-gang strip The Group the kids use a springed-boot device to kick a policeman in the face (but he gets his revenge by beating them up in the woods).

All that sounds shockingly irresponsible and violent in text like that, but in strip form it was presented as a slapstick cartoon. As far as I'm aware there was never any calls for Pow! to be banned as back then parents understood that kids could differentiate between cartoon violence and the real thing. In fact, such slapstick cruelty was frequent in the Odhams comics and it certainly never inspired my friends or myself (who read them) to imitate the acts.

Other strips in Pow! No.1 worthy of note include the start of the adventure serial The Python. (Pilots crash in the Bay of Bengal and encounter a giant robot python, which they later take control of. It's like Mytek the Mighty but with a mechanical snake instead of a mechanical gorilla!)

As he was busy on other comics, Pow! contained no work by Leo Baxendale, but artists such as Mike Brown on The Group ghosted his style well enough. However, the standout strip of the issue, and the main reason Pow! is still collectible, is the back-page strip, Dare-A-Day Davy, illustrated by the marvellous Ken Reid. The plot was simple; Davy cannot resist any dare, and this always lands him into trouble. As the weeks progressed, and the readers were invited to send in their outrageous dares (for the prize of... a pound!) the strip became even more manic and violent, showing Ken Reid's artwork at its most outrageous, and funniest.

Like any new comic, Pow! had some clunkers in there too: Jack Magic (13th Century magician's apprentice finds himself in modern times), and Wee Willie Haggis (Scottish version of Eagle-Eye from Wham!). Neither appealed to me much, and presumably didn't appeal to many readers as they were eventually dropped and replaced by much more memorable strips... but that's a story for another blog later this week.

Lew, THANKS!
I remember more clearly how I got the first of the Odhams next comic in the series - Fantastic. I still remeber the smell of the plastic pendant thing they gave away!
But that free gift you mentioned ...would it be outlawed today?
THANKS Lew for putting a smile on my face.
Norman

You'll be pleased to hear I'll be covering FANTASTIC in a few weeks, when its 40th anniversary comes around. (Yes, that plastic pendant did have a distinctive smell!)

As for the POW! free gift; no I don't think it'd be outlawed today as free guns (now plastic, not card) seem to be back in favour (in comics like ACTION MAN A.T.O.M. etc). Although their "bullets" are usually made of soft foam.

Ah, this brings back memories. I just found your blog via the Wikipedia entry for Power Comics.

Since watching the Daredevil film a few days ago, my mind has turned to Marvel comics and today I remembered my first introduction to Marvel in the form of Pow!, Fantastic and Terrific. I must have been 9 at the time, and I remember my great pleasure at discovering these comics. Soon afterwards I changed schools, and made a new friend who had a big collection of imported Marvel comics. I was in heaven!

I think I lost interest in comics by the age of 12, and have never read them again, though I was fascinated recently to read the Wikipedia entry on Civil War. But, as a fan of Buffy the Vampire Slayer (and I'm a little embarrassed to be a Buffy fan at the age of 48!), I'm tempted to try the Buffy Season 8 comics which are due out next year.

P.S. I've just remembered I had a brief foray back into comics while I was at uni, when a friend turned out to own some bound volumes of The Trajan Empire, a comic strip I used to read as a child in Look & Learn. (My parents used to buy it for me because it was "educational". Of course, I preferred the comic strips to the educational articles.)

I'll be spotlighting all those Odhams comics here in time so hopefully they'll bring back more memories.

As for The Trigan Empire, I think that was the main reason most of us read Look and Learn, even though teachers and parents thought we had it for the articles. You may be pleased to know those old strips are now available in luxurious hardback, - but they're not cheap! (About £50 per book!)

So it's the Trigan Empire! I could have sworn it was Trajan. (I must have confused it with the real Emperor Trajan.) I see there's a whole web site devoted to it: www.triganempire.co.uk

I never cease to be amazed at how much information you can find on the web about these old and ephemeral (or so I thought) works that I vaguely remember from my childhood.

This is getting off the subject of comics, but I had another childhood memory revived recently. As a child I was a big fan of the Gerry Anderson puppet shows, and owned a number of records of the soundtracks of episodes. But there was another, non-Anderson, puppet show which I couldn't remember the name of, until I recently saw the DVD set in a shop. It was "Space Patrol". For a moment I was tempted to buy it, but I think the nostalgic glow would have worn off after about half an episode, leaving me with a mostly unwatched set. Still, it was a nice surprise.

So it's the Trigan Empire! I could have sworn it was Trajan. (I must have confused it with the real Emperor Trajan.) I see there's a whole web site devoted to it: www.triganempire.co.uk

Space Patrol is interesting in that it's a little darker in a way than the Anderson puppet series of the time. That said, I agree that sitting through a whole DVD collection of them could become a bit waring.