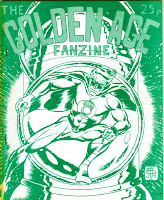 Concluding our look back at 'zines of the heyday of UK comics fandom, here's another handful from the 1970s and 1980s.

Chain Reaction No.5 (Summer 1984): Published by Frank Plowright, Steve Whitaker, and Hassan Yusuf (who were also the organisers of the UKCAC events back then). A nicely produced and well liked fanzine with a good balance of features, art, letters and exclusive interviews. Cover of this issue is by Mike Collins (now the artist of the Doctor Who strip in Doctor Who Magazine) and inked by Mark Farmer (who went on to ink many strips including X-Men).

Doomzine No.2 (1979): Published by Jonny White. Good little 'zine which didn't run for long but was enthusiastic and enjoyable. Cover and much interior artwork by Martin Forrest, a skilled fan artist of the time.

Fantasy Advertiser No.83 (February 1984): By this time F.A. was published by Martin Lock and was similar in content and style to his old Bem 'zine. Good variety of contents, including a regular feature on British comics I contributed that I'd completely forgotten about! Cover is by Cliff Robinson who still occasionally contributes covers for Judge Dredd Megazine.

Fantasy Express No.4 (Summer 1982): Another one of my fanzines, having changed its title from Metamorph with the previous issue for reasons that now escape me. (I think I believed F.E. would be more commercial.) Contains the only fanzine interview ever published with the late Charley's War artist Joe Colquhoun (who provided the front cover). Logo is by Kevin O'Neill, who also drew the fantastic back cover which I had to include here. (Kev of course is now the artist of The League of Extraordinary Gentlemen.)

Golden Age Fanzine No.2 (October 1976): Another of Alan Austin's fanzines, this one focused on the superheroes of the 1940's. Like many early fanzines, the interior pages were stencil produced, which meant for some poor print quality in places but all fans cared about was the information, - and this 'zine delivered. Cover art by Jean-Daniel Breque.

I hope you've enjoyed these looks into fandom's past. Please leave comments if you wish.

How did "stencil produced" work? The only form of stencil art I'm familiar with, airbrush over cut-out stencil sheets, would seem too cumbersome for something fine like body text type.

It's kind of weird the way desk top publishing took all the graft out of zine production, but then very soon after that the net removed the necessity for paper zines!

To be honest I'm not sure how the stencil method worked as things had moved on to photocopying and litho by the time I did my fanzines. (Wasn't it called Gestetener printing, or is that a different method?)

I know the results of stencil printing looked very messy. Often the ink would either be too heavy or too faint, and there'd be blotches in the margins etc where there shouldn't have been.

Stencil printing involved all sorts of messy stuff: a layer of three sheets which you could type on, or draw on with a scraping tool (which had to be done with care, otherwise it would rip!).

The stencil would then be put on a gestetner and printed either manually (by turning a handle) or (gasp) by machine.

My dad used them to print his parish magazines and I used them while at University in the 1980s. If you made a typing mistake there was special liquid which could 'heal' the stencil, although it didn't always work well.

Thankfully things have come a long way since then.

It would be great to see these fanzines in their entirety on the web somewhere as CBRs or PDFs. I'm sure there are some fascinating interviews in many of them. Thanks for sharing, Lew

Thanks for the info John!

As for reproducing interior pages of the 'zines, I don't want to tread on anyone's toes regarding copyright obviously. However perhaps at some point in the future something could be arranged either here or on another blog.

Sounds like a potential group project there. Tracking fanzine writers and artists and securing permission to make their work available in one single place on the 'net. I've just popped my thinking cap on.

Yes, it would be good to have one specific website as a pool for such articles and artwork. (Not here obviously as I venture into other publications.) Good luck if you embark on any such venture.

How great to see and read about these old fanzines again ... ones that I remembered well, like BEM, Fantasy Advertiser and Panelologist but ones that I really loved at the time, like Graphic Sense that had long since forgotten about.

Seemed to be so busy back then - the week's collection of post could bring half a dozen fanzines all with their own sense of identity and a bunch of great characters producing them (even if most were variations of MLock's imagination!).

You're right Ian; there did seem to be a lot of 'zines around back then. As each one would review other fanzines we'd be constantly ordering them so they soon piled up.

As convenient as online news 'zines are I still miss the days of paper fanzines!