Annuals of the Fifties (2) 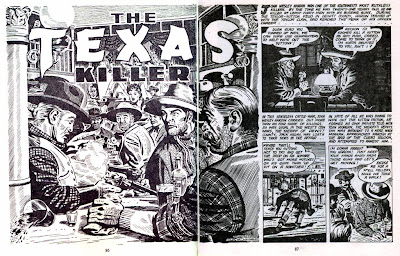 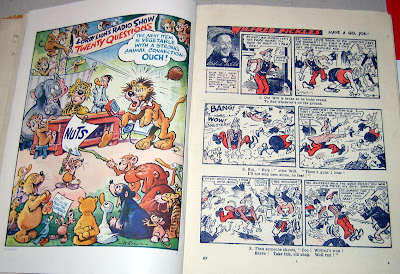 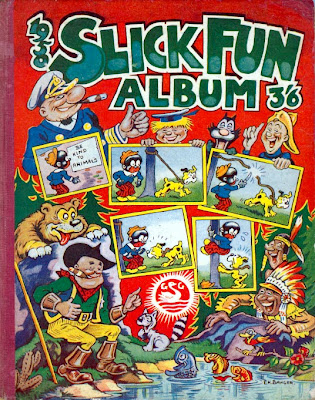 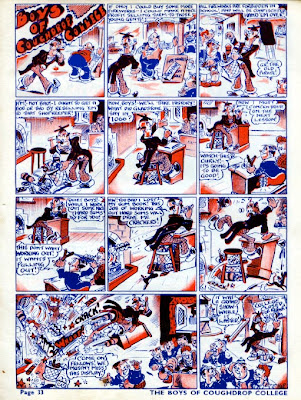 More examples of comic art from annuals of the 1950s:

The Texas Killer: A superb opening for an 8 page story in the Buffalo Bill Wild West Annual (1956), the cover of which was shown on yesterday's blog. These 144 page annuals were entirely illustrated by Denis McLoughlin (1918-2002), showing some of the most respected work of his long career. Note also how the influence of American comics benefits this strip: McLoughlin has the logo floating over the art (rather than in a separate banner) and he kicks off with a big intro splash. More info on this renowned artist can be found here.

Radio Fun Annual 1951 frontispiece: This full colour Lordy Lion illustration is from the Radio Fun Annual shown yesterday. Drawn by Roy Wilson, whose style had been the major influence in British humour comics throughout the Thirties and Forties. A few years after this, Leo Baxendale would become the new "house style" of comics, but Wilson's influence would still be visible in the styles of Robert Nixon, myself, and others. I'm not sure who drew the Wilfred Pickles strip facing it; perhaps Wilson, but more likely one of his imitators. (Update 1/2/2007: On the Comics UK forum, Ray Moore kindly informs us "By the way the the Wilfred Pickles page from the 1951 Radio Fun annual is actually the work of John Jukes. Jukes was one of the titles most prolific artists and was drawing Norman Wisdom for the paper right up until the final issue in 1961. He then dropped out of sight for a decade until in 1971, the year before he died, he began to contribute a strip to Whizzer and Chips titled Belle Tent which in itself was a revival of the old Buster strip Dinah Mite.")

1950 Slick Fun Album : One of the many books published by Gerald G. Swan. Much of Swan's output was relatively inferior compared to the giants such as Amalgamated Press or D.C. Thomson, but he was an enterprising publisher. (He had stockpiled paper prior to World War 2 and so was able to publish during wartime paper restrictions.) The cover strip of this annual shows a racial stereotype that thankfully wouldn't be allowed in a comic today.
Boys of Coughdrop College is one of the interior strips from that annual. Drawn by "Hep" but heavily influenced by Roy Wilson it's a typical example of comics of fifty plus years ago: teacher in mortar board (and spats); coal fire; inkwells; blackboard; and a firework prank (something totally forbidden in children's comics now). Notice also that the shop owner has no ethical dilemma about wanting to sell fireworks to kids! Naive times.

If you'd like to see more covers of old British annuals, visit www.tonystrading.co.uk
and a great source for British comics strips is the Comics UK website, which is currently running pages from a 1960 issue of Film Fun.

Thanks for the firework one.....that shopkeeper was unbelievable...though fireworks are still sold to 16 year olds which in my mind is still too young. Of course Robert Nixon was influanced by Wilson...the style is lots of circles, lots of laughing, cute animals, big movements and a 3D quality. I miss Robert Nixons art on Ivy the Terrible and Roger the Dodger. He was great at exciting framing where the characters break out of the boxes...all different shapes and sizes...lots of action!!

I'll be showing more firework strips later in the year. :)

Knock-out annual It looks like the space car is chasing the space train...wonder if they try to over take it!!
Very Jetsons...I love the way the 50's/60's guessed what the future would look like......Shocker Jock in the 50's Dandy in his what looked like a underwater diving suit...the colourful future...robot teachers with canes!!......robot maids and servants.. robots doing the housework for the wife...everytime we guess the future a lot of our own time period is not far behind...

You know, for a minute there I thought that read "Sick Fun..." Must have an eye test