'The Dandy' is dead. Long live 'The Dandy Xtreme'. 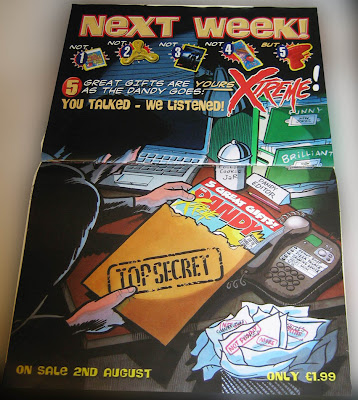 A double page ad (drawn by Nigel Parkinson) in today's Dandy answers what many have been asking. Is The Dandy to end? As it turns out, yes... and no.

The Dandy, record holder of the world's longest running comic, "ends" with the issue on sale now... but is immediately regenerated next week, like Doctor Who, into a new form. From next Thursday (2nd August) the publication has a title change to Dandy Xtreme, switches from weekly to fortnightly, ups its price from £1.30 to £1.99 and ventures further into the magazine field, rather than the traditional comic format. (Although comic strip favourites such as Cuddles and Dimples will remain - with Desperate Dan reprinting classic Dudley Watkins strips.) The numbering will continue from the weekly, so the first Dandy Xtreme is in reality issue No.3426.

These changes will no doubt have older readers shaking their heads in disbelief, and the great sorrow is that it's happened in the comic (sorry, magazine's) 70th anniversary year. However, The Dandy has always been first and foremost a children's publication and the facts are that 21st Century kids in the UK seem to prefer magazines to comics. (Why this is the case, when countries like Japan can still have a thriving comics industry, is a debate for another day perhaps.)

For us old timers, "our" Dandy has been gone for some time. "Our" Dandy was the Dandy of our childhood. For me, it was the variety-packed 16 pager of the mid-sixties, full of strips by Dudley Watkins, Jack Glass, Bill Holroyd, Eric Roberts and others. For fans now in their early thirties "their" Dandy would have been the Dandy of the mid-eighties, when it first went glossy. Nothing can take away "our" Dandy. History cannot be changed. Dandy Xtreme is for the children of today.

We might not like an old favourite comic changing with the times but it's a necessity for it to survive. It'll be interesting to see how it fares. In this day and age publishing is equally about pleasing the retail giants as it is accommodating reader's tastes. It can be quite a juggling act. Hopefully the new format and price will encourage more retailers to stock it. (Distribution of the weekly has been quite poor recently. One local newsagent insisted "The Dandy? That finished years ago!")

One thing that springs to mind though is that if The Dandy was lagging behind The Beano in sales, will Dandy Xtreme also suffer from being too similar to BeanoMax? And will Dandy Xtreme's new promise to contain "Totally Gross" humour make it a copy of Toxic? Time will tell.

Incidentally, sales of manga periodicals have fallen sharply in Japan. The publishers blame mobile phones. Have you read The Essential Guide to World Comics by Tim Pilcher and Brad Brooks? Every chapter reports falling sales of comics in every market internationally.

Sales of book-formatted comics, however, seem to be on the rise in English-speaking markets. So perhaps weekly and monthly comics are going the way of The Strand or Pearson's Magazine decades before them, but that doesn't mean that the medium is doomed.

Shame really.
All part of the increasing move away from children as children. It just isn't enough nowadays to have a simple comic, it's got to be slightly more grown up than that..

I'd love to get my little girl more comics but the house rule is that she only gets them if she actually wants the comic, not the ridiculous bloody gift on the cover.

She's recently got into the Beano and I was going to get her a Dandy to try soon. Maybe I'll get the last one anyway. I'm horribly aware that in a few years it will be nothing but celebrity mags so I'm trying to stop the rot now!

Hi anyway Lew.
Hope to catch up with you at the Birmingham Con in October?

Choosing Happiness
“ Ilchi Lee that any people feel that they can only be happy and peaceful when they are given the right circumstances and conditions. However, we can be at peace and be content in this moment now, at this place now. This is our choice. There is nothing that is blocking this choice. Only our thoughts are obscuring this choice. Why can’t we be content and happy without conditions? Enlightenment is a choice that continues from instant to instant, from moment to moment.” - SRV

Well Michael, I think you're on the wrong blog. Sure, people can "choose" to be happy at any time... if they're insensitive selfish dullards. Please take your "Enlightenment" claptrap elsewhere.

Comics for me were reflections of the two cultures I grew up with--American and British (and, for the past 31 years, back to American). I much preferred the Marvel and D.C. stuff but, in the years when I had to wear school uniforms with striped ties, grew to appreciate the racuous, rebellious, but all-in-good-fun style of humor represented by Dandy, Beano and the other UK classics. Especially after developing an interest in comics history (fueled largely by the Penguin Book of Comics) around age 14.

This "Xtreme" thing is another example of how the transatlantic cultural lines have blurred into a haze of skaeboards and cell phones. (Because of my long-term interest in comics, my mother still sends me Classics From the Comics and some of the modern versions at least once a year. I noticed the change in the Dandy's style a year or so ago. Inevitable, I suppose.)

Glad to see the name carried on, though, and interesting that 1947 Desperate Dan strips are included.