Dan Dare returns... but for how long? 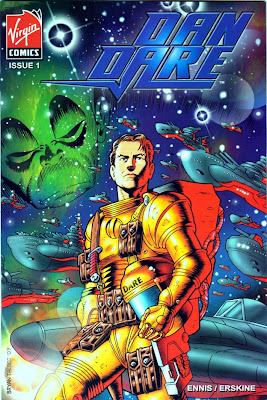 As the media has made all aware, Dan Dare is "back" (if you ignore the fact he's already been back for five years in Spaceship Away). However, it's worth pointing out that the new Dan Dare comic from Virgin Comics is an American comic, not a British title. I mention this not out of xenophobia (for I have no time for such childish "my country is better than yours" foot stamping) but because none of the publicity seems to have mentioned that Dan Dare isn't available in the UK outside of specialist comic shops.

I'm sure that readers of the Daily Mail are probably scouring the newsagents for Dan Dare No.1 even as I type these words. Rumour has it that someone is trying to secure newsagent distribution for the comic in the UK, but at present it's only available in comic shops or via mail order. (Try eBay for example. That's how I acquired mine when my local Forbidden Planet sold out.)

Anyway, question is; after all the hype is it any good?

The character of Dan Dare presents such a problem for any publisher willing to revive him that I'm wondering why they bother. Who is Virgin's Dan Dare pitched at? The 50 or 60 somethings who get misty eyed over Dan's original home in Eagle, but who probably rarely if ever set foot in a comic shop? The 30 somethings who remember the versions from 2000AD and the new Eagle in the 1970s and 1980s? Or the comic fan who has never heard of the character before?

As it turns out, the new version (written by Garth Ennis and drawn by Gary Erskine) seems to be striking a balance between all of those choices but leaning towards the original Dan Dare albeit with a degree of cynicism replacing the gung ho optimism of the 1950s. While this is kind of appealing for readers like myself (a 40 something who missed the original version first time round but has read reprints of it from an adults perspective) I can't help thinking I'm in the minority.

Usually I really like Garth Ennis' writing. (His Punisher series for Marvel is excellent, taking a title I always considered quite idiotic before and turning it into a high voltage ultra-violent adult gangster comic.) On Dan Dare the script is as professional as anything Garth has done but I'm wondering if the slow "decompressed" pacing will suit the tastes of the readers it's aimed at. Admittedly even the Fifties Dan Dare stories could drag on a bit but Virgin's 22 pages of conversation and little action might be a bit too quiet for its intended audience.

No doubt the pace will pick up as the series progresses but I'm getting increasingly bored with comics that are deliberately slow burners so they'll work better in the graphic novel collection. Yes, the decompressed techniques set up characterization and provide background to Dan's world, but it takes Dan three pages to walk to the pub! Fortunately there's a plot development later, or otherwise we'd be treated to six pages of Dan going for a curry on the way home. 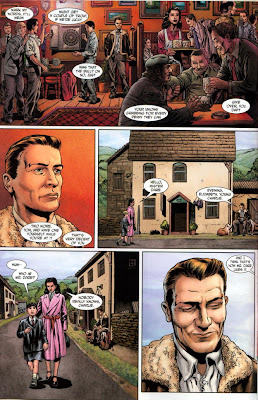 Bryan Talbot provides a striking cover, which is beneficial considering the editor's chosen a blue logo over a blue background. Gary Erskine's artwork on the strip itself shows a little jarring awkwardness with the perspective of some figures but that's a minor quibble. Overall he's produced a tremendous job and maintained this reader's interest throughout a rather quiet opening issue. I'm looking forward to his version of the Mekon and the Treens in coming issues. (Yes the Mekon is coming back too.)

Will Dan Dare be a hit? I'm guessing that sales on issue one will be respectable (if its audience know where to find it) but I can't see the average fan of American comics putting it on what they call their "pull list". (That's a list of must-buy comics apparently, not a reference guide for misogynists.) Personally I was intrigued enough by issue one to continue buying it for another issue or two but whether I'll stick with it through the entire seven issue series is uncertain.

I thumbed through issue 1, and didn't buy it. I couldn't figure out why I was unhappy with it. I must admit that my gut feels the same every time I pick up a contemporary US-style pamphlet comic. Lew, I think you've hit the nail squarely on the head: slow pacing annoys the heck out of me, and is totally unsuited to small page-count publications. I stopped buying Morrison's New X-Men about 7 issues into his run for the same reason. With Dan Dare, I'll be waiting for the bound collection, and if they don't publish one I'll not bother at all.

Yes, the more I think about it the more I believe they should have picked up the pace on this comic. As it's being targeted at a different reader to the usual US comic fare it needed to have more substance and plot so the buyers feel they've had their money's worth. I can't see this attracting new readers into comics.

I'm bored with comics being paced like they're tv movies. In practice each issue reads like one act of an episode of Heroes or something. Except that when the commercial breaks come in a US tv series one doesn't have to wait a month for part two.

Comics and movies/tv are entirely different media, but many publishers seem to have forgotten this.

I asked for it in a comic shop in Lincoln which is tucked away down the back of a very 20's looking shopping centre, and they had sold out, so it can't be doing too badly.

Still i think i have a new slogan for my own self published comics: "If you want decompression, go diving, if you want a slow-burner, buy a candle..."

My local FP also sold out within a day, which makes me think they simply didn't anticipate demand. Some comic shops are run by 20 somethings so they might not even know who Dan Dare is and only order five copies or something.

Same situation with those Showcase collections. They don't always order them because it's "old stuff" that they "didn't think anyone would want"!

It's understandable in a way because shops can't order everything that's in the Diamond catalogue, but I do feel the age of the staff sometimes clouds their judgement.

That Dan Dare comic was AWFUL!!!

The original Frank Hampson Dan Dare will never be bettered.