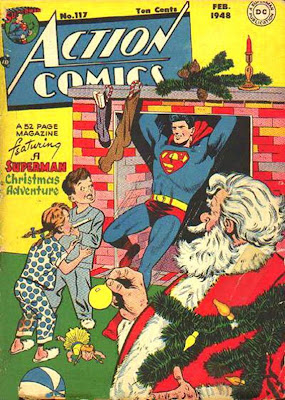 No time for a full blog today but here's an interesting item: by sheer coincidence, Jon K's superb Random Acts of Geekiness blog started running Christmas comic covers the same day I did. The difference is that Jon's blog features American comic covers, which he's updating every day. It's a great selection of varied titles from over the decades and I think our blogs compliment each other well for fans of Christmas themed comics.

Apart from that, Random Acts of Geekiness features a wealth of other material too. Fascinating visual records of cult memorabilia! Check out his blog at:
http://waffyjon.blogspot.com/

Rummaging through that blog should keep you all busy for a while. I'll post Part 4 of the UK Christmas Comic Covers selection on this blog soon!

Great to see those many Christams covers - some for the first time. I can well remember anticipating which comics would celebrate and which wouldn't. You could always rely on the Thomson papers to join in with the fun, and for the most part their IPC counterparts. Of course I'm talking about the 1970's
here which is the period those now in their forties well remember. As you can see from your examples the 70's may have seen a great decline in sales but the artisits remained true to traditions and did their best with some great covers. My personal favourite amongst those you showed is Sparky from 1970. The Beano from the same year is the one most remember but this Sparky cover is better in my opinion. The characters ae more cnetral and as for that black background - what a stunner! Wish I had it.
As you mentioned later, Sparky was a bit of an oddity and is generally overlooked now. I haven't seen an issue for ages (due to circumstances) but from what I recall those early years were made up of strange two tier reprints from the forties. And as for the cover character, well...
Like most DC Thomsom papers Sparky has been overshadowed by The Dandy and the Beano. In my opinion The Beano is THE greatest British comic (during its 50's - 60's period) but along the way it has dragged The Dandy along with it. Don't get me wrong, The Dandy was a fine comic but no where near as good as its companion. In fact it was a bit drab during the 50's , then livened up during the 60's and was a solid enough comic during all of the 70's. It was actually a BETTER comic than the Beano during the 70's!
As for IPC and those covers you feature, well, the day-to-day editions may be vilified now but the Christmas ones are really great fun. The same goes for the IPC annuals. Some of the covers were BETTER than those offered by Thomson during the same period.
The TV Comic Christmas issue you featured was quite drab. Does anyone know anything much about this title? Then again, does anyone know much about almost any British comic title, apart from start and ending dates. British comic history has almost disappeared and its such a shame. I can hardly find any information regarding the AP stuff. Why didn't Denis write his magnus opus?!!!! I will tell you why. Because he felt no one would publish it. That was his dilemma in his later years. He was our last chance.
Thanks for the samples. Its good to look back. What choice do we have now?

(For those unfamiliar with his name, Alan Coates and his brother David were the editors/publishers of British Comics World, a truly wonderful magazine on UK comics from about 20 years ago.)

Many thanks for your comments Alan. I think I agree with everything you've said there. Interesting that Denis felt no one would publish a proper history of British comics. I'm glad he did manage to get some specific books on the subject published though. (The only one of his I'm missing is 'Victorian Comics'.) Have you seen Paul Gravett's 'Great British Comics' book? As close to a history of UK comics as we're likely to get I think.