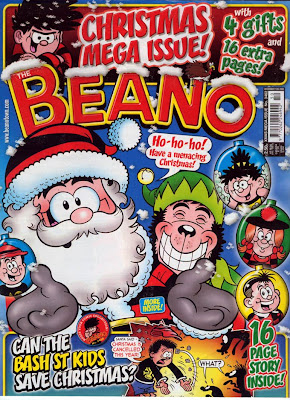 Here's the final group of Christmas comic covers, and it brings this blog bang up to date with a selection of Christmas comics available right now. Firstly, this year's Christmas edition of The Beano, and it's a bumper 48 page issue packed with seasonal fun under a cover by Jimmy Hansen. Highlight is a new 16 page Bash Street Kids strip by Nigel Parkinson. There's also a two page remix of The Night Before Christmas by Laura Howell and Hunt Emerson, plus lots of other strips including the first Christmas Super School strip drawn by some bloke called Stringer. 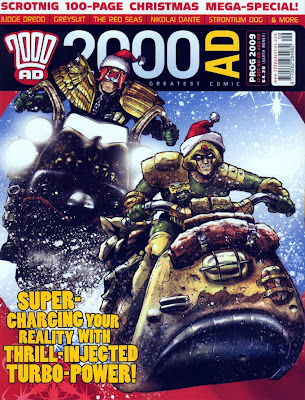 2000AD celebrates Christmas with its now traditional 100 page special issue, on sale for three weeks. The Judge Dredd / Strontium Dog cover is by Carlos Ezquerra and the contents include festive helpings of Dredd and Sinister Dexter, plus a new strip, Marauder, by Robbie Morrison and Richard Elson. 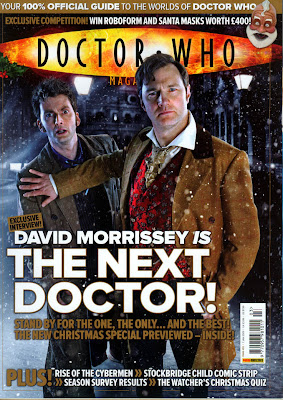 Doctor Who Magazine will celebrate its 30th anniversary next year, but for now the Christmas edition features the start of a new comic strip by Dan McDaid, with Mike Collins returning to illustrate it. 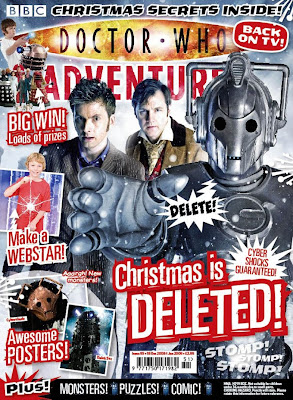 For younger readers, the BBC's top selling Doctor Who Adventures has a busy cover as usual. In today's kids' comic world, a "competition" is now called a "win" and the contents are a mix of activity pages, pin ups, sparse features, and one comic strip. It's a world away from the days of the comparatively sophisticated TV Century 21... 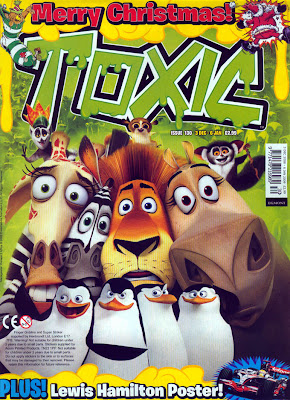 Egmont's Toxic also has a lively mixture of feature content promoting the latest in films, DVDs, games and toys, but this festive edition has more comic strip pages including Rex by John Short and Alex Paterson, Robin Hoodie by John Short and Laura Howell, and four pages of Team Toxic by that Stringer bloke again. 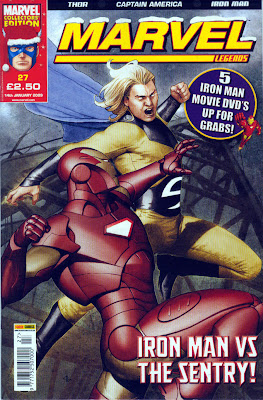 Panini's Marvel Legends has no festive aspect to its reprint content but that hasn't prevented editor Brady Webb from adding some traditional Christmas comic snow to the logo, and a Santa hat to Captain America in the corner box. Cheer up Cap! It's Christmas and you might even be back from the dead again soon! Cover by Adi Granov. 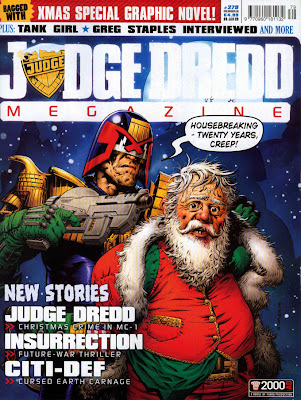 Judge Dredd Megazine celebrates the season of goodwill by having Dredd arrest Santa on the cover, drawn by Greg Staples. One of the best British comics around at the moment, the Megazine features a good mixture of strips and comic-related articles. 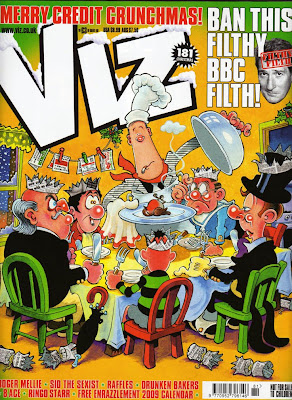 Next, the ever-topical adult comic Viz reflects the financial state of the UK with its Merry Credit Crunchmas cover by the brilliant Simon Thorp. Strips by various cartoonists (including myself) are within plus the usual satirical features. 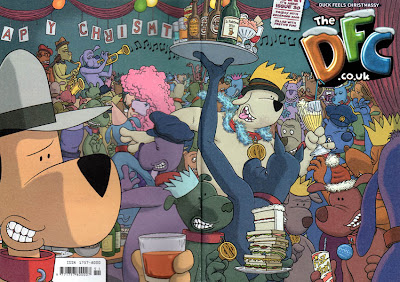 (Updated 20/12/08): Finally, the first Christmas issue of The DFC with a wraparound party cover by Dave Shelton. It's a bumper 64 page issue, no ads, packed with new comic strips oozing with today's talent. Remember this comic is subscription only, - is this the shape of British comics of the future? Time will tell. Put on your party hat and conga over to http://www.thedfc.co.uk to subscribe.

So there you have it; ten blogs of festive celebration, covering over 100 years of comics. I hope you've enjoyed this selection box of covers from Christmas past.

As you can see from today's gallery it's a pity that the traditional Christmas cover seems to be fizzling out. Unexpectedly, it's mainly the adventure comics that seem to be maintaining it, whilst, apart from The Beano and the humour/adventure anthology The DFC , children's humour comics are mostly avoiding it. (Neither Dandy Xtreme or Beano Max had festive covers this year, although their contents did reflect Christmas somewhat.) Critics may assume this is due to "political correctness gone mad" but, as is often the case, the anti-pc brigade would be wrong. Truth is such changes are inevitable as children's comics / magazines increasingly depend on reflecting the multimedia world, using their covers to promote films (as Toxic does this year) or simply because the traditional comic has more or less died out.

To end on an upbeat note, if cynical Atheists like me can still enjoy Christmas comic covers then I'm sure many others do too and that they'll continue. Come back in 12 months time for the covers of Christmas 2009! ;-)

I'd just like to say thanks for the covers series. I appreciate the effort and it brightened my December.

All the best Lew.

Thanks Reuben. Silly mistake of mine, now corrected. I was looking at Clint's ABC Warriors earlier so his name must have been on my mind.

I suspect that the reason why Beano Max doesn't particularly reflect Christmas is what we were discussing back on Comics UK about shelflife. Having a third Thursday publication date, November would be ridiculously early, and at one week before Christmas, it wouldn't have the necessary attraction.

New Year is a lot more elastic, though, and Euan and the features guys have come up with the goods on that. Very Scottish, one might say!

The 'Meg picking up again then? perhaps i can give it one more try.

Dont you think the "Marauder" story would be far better suited to the Megazine, incedentally? Then again they only recently had an "ex-judge ninja hero" story of thier own, albiet one that was a little more insane, what with killer monks with TV's for heads and that.

Depends. If Marauder is more than six parts, as I assume it will be, then perhaps it wouldn't be suitable for the Meg as they tend to run shorter serials.

Thanks for all the great Christmas Covers from across the pond. Most of these I hadn't seen before!

What a shame most people won't see that Beano cover given that it's obscured by about 4 pieces of free gift tat.

Anyway...Christmas seems a good time to stop being a blog voyeur and says thanks. Not just for the Christmas covers but for all the effort you put in throughout the year. It's always a pleasure to read and it's been a comic history education! :)

Merry Christmas and here's to your continued success in 2009, cheers!