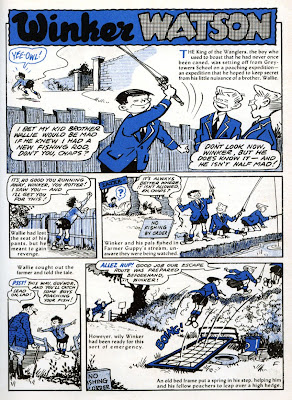 The artist Eric Roberts had one of the most distinctive styles to grace British comics from the 1950s up until the early 1980s. His strong, clear ink line was a pleasure to see and his characters could suddenly leap into flustered panic that never failed to amuse. Probably best known for his strip Mike on the cover of A.P.'s Knockout in the 1950s and his long running strips Winker Watson and Dirty Dick for D.C. Thomson's Dandy, little has been known of the artist's background because anonymity was usually the norm in those pre-comic convention, pre-internet days.

You can read Erica's comments on Peter's blog here.

Above: The opening page to the Winker Watson strip in The Dandy Book published in 1963.

Below: The very first Dirty Dick story, running as a centre-spread in The Dandy No.986, dated October 15th 1960. 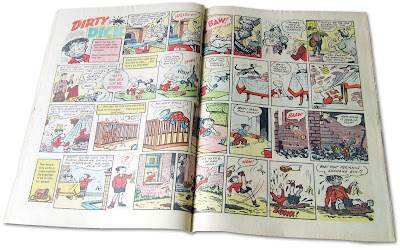 Great to see the first Dirty Dick..great fun seeing him growing up and how he got his name!:)

Power fan says: Eric Roberts's strips were great. Serious question - was he deliberately trying to get risque names through - Dirty Dick, and the brothers Winker and Wallie (swap the second letters) do you think?

:-) Eric didn't create the character's names so either it was a joke by the editor Albert Barnes or, more likely, just a coincidence. Dick was a very popular name back then.

I was a Magnet fan since a kid and read all the Greyfriars and Harry Wharton stories I could find (now all available on the friardale site). When I came across Winker Watson by Eric Roberts, it was like a reincarnation of them. I wish Roberts had been able to do Greyfriars school comic strips.

Eric Roberts did draw some of the Billy Bunter strips for Knockout. I posted some info and scans here: