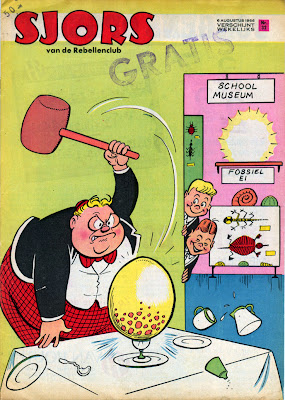 As I wrote about the Dutch comic Sjors the other day in my blog about how Billy's Boots fared in Holland I thought you might like a quick look at a few of the other UK strips that were exported to the comic. This particular issue is from several years before Billy's Boots appeared there but it still features some British content.

Billy Bunter was very popular in Holland as Billie Turf and appeared in Sjors as well as his own albums. Above is a cover by Reg Parlett for Sjors No.32, 6th August 1966. I don't know if the cover was specially commissioned but I suspect it's more likely to be a reprint from the large opening panel of a UK Billy Bunter strip from Valiant. Oddly enough, Billie Turf isn't actually inside this issue!

As I understand it Sjors was a long running weekly in Holland, named after the white boy in the strip Sjors en Sjimmie which appeared within the comic. (Sjimmie being his black friend, - unfortunately caricatured with the clichéd thick lips and limited language skills.) The content of the 32 page issue I have seems to be mostly Dutch but there are a few UK reprints in there.

Another British strip in the comic was Reg Wooton's Sporty (again from Valiant) which was retitled Mug en Mik... 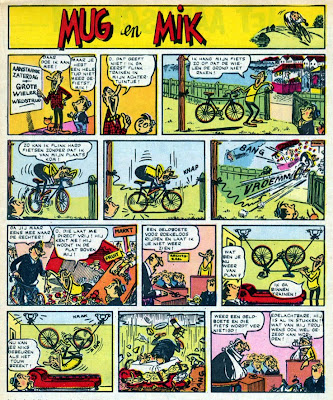 Robot Archie also appeared in Sjors, and was very successful there (spinning off into softback albums too). Although he retained the name Archie in the stories, the title of the strip became De Man Van Staal (The Man of Steel). Here's a page from Sjors, again from that August 1966 issue... 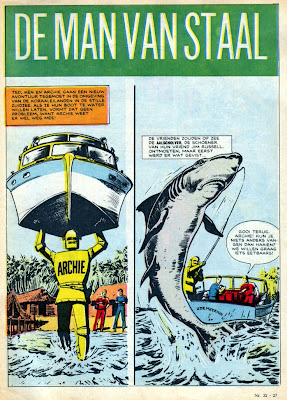 ...and the original version from Lion dated 12th February 1966. Artwork by Ted Kearnon... 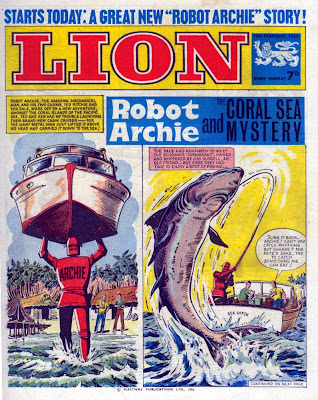 If you compare the two you'll see that not only has Archie changed colour but the quality of the Dutch reprint wasn't great and some detail was lost. The Dutch pages were also cropped and edited to fit the artwork into a narrower format.

Incidentally, collectors of the UK weekly comic Vulcan from the 1970s will probably know that the Robot Archie strips in those were English translations of specially drawn Dutch strips that had appeared in Sjors (and were in themselves redrawn versions of Sixties UK strips from Lion, - complicated eh?).

This has been just a tiny example of how UK strips were represented overseas. There were many more characters which made it abroad, and at the same time Fleetway returned the honours by reprinting European strips in British weeklies, such as Lucky Luke in Valiant and Asterix in Ranger. I may take a brief look at those at a future date.

Never knew that our favorite heroes were transported to another dimension, with so many changes. :)

Loved those Archie,Sporty, comparisons and differences...

And you say Lucky Luke, and Asterix were featured in British comic too... would love to see that, please do post them whenever you get time.

It was most interesting to read about the comic title of Holland featuring British comic material. Also, the title Vulcan brought back some good memories. I have the complete set which I might re-read again mighty soon. Thanks. John - Australia

Sjors & Sjimmie (George & Jimmy) is a Dutch adaptation of the comic strip Winnie Winkle, specifically the character Perry Winkle from that strip. The difference between the American original and the Dutch adaptation is that Sjors (Perry) forms a duo with Africa-born Sjimmie (Source: Wikipedia). The comic was first published in the Netherlands in the late nineteen-twenties; Sjimmie was added in the nineteen-forties, with all the racist features of that era, like thick lips and coal-Dutch. But as of 1975, both Sjors and Sjimmie got more modern features. Sjimmie became a hip, cool guy, who, from then on, was Sjors's equal.

Thanks for the info, Martin!