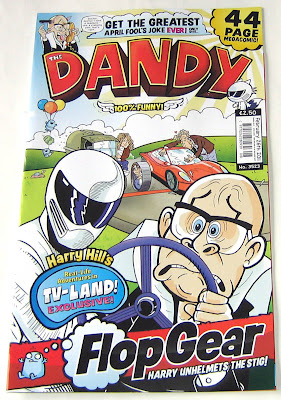 This week's edition of The Dandy, out today, is another bumper 44 page special. Again, the cover is in a taller format to hopefully give it more attention on the crowded newsstands. (Next week reverts to the usual £1.50 32 page format.) 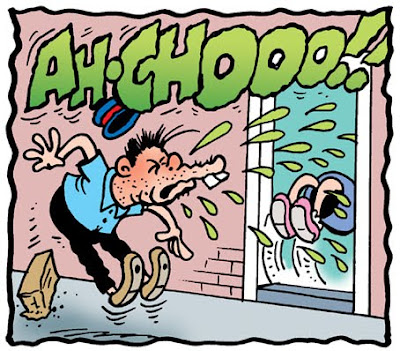 I think this issue sees the last Postman Prat for a while, but he will return! Next issue sees the debut of four new strips (including a revamped Harry and his Hippo) for a vote-off where the readers decide who stays and who goes.

The cover mount for this issue is an early April Fool's joke of the old fake knife through head toy. Just the sort of gruesome but harmless fun that kids enjoy. 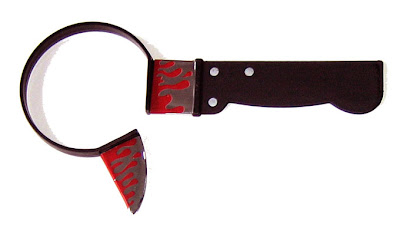 I've wanted one of those fake knife jokes since I was a kid.
It's not too late for me to wear one is it?

Arrgh! I've just realized it is! I'm bald. That top band thing will be totally obvious!

Not if you put the band behind your head so it looks like someone's whacked you in the back of the noggin with the knife.

Not that I've played with the toy myself like that of course. (Ahem.)

Haven't managed to get a copy yet, but I see some people are already kicking up a fuss over at the Dandy facebook page. Pointless offering any kind of argument as these things just get stupid, but it is a shame that there are still those who feel it is their moral duty to watch over the nations well being in this way. Yes, there is a knife crime culture in the UK which is very sad. No, that culture is not a result of free gifts in the Dandy.

As for the bald thing, simply grow a beard and slide it under your chin - result!

I've just left a comment on Facebook. It's absolutely ridiculous that some people take a free toy so seriously. Those fake plastic knives have been around for decades!

A bit of red ink on silver paper isn't going to desensitize children to real violence and gore. When I was a kid I always wanted one of those rubber bloody fingers that Joke Shops sold, but if I'd seen a real finger chopped off I'd have lost my lunch! (I still would!)

Kids know the difference between fantasy and reality. Alas, I'm not sure some adults remember what it was like to be a child.

This is pathetic, 'knife through head free gift is unacceptable', can it people! Honestly, I hate free gifts but do people really need to complain about them being what they are?!

Anyway, Postman Prat was amazing Lew, loved it, are the much-missed Kid Cops back next issue? I hope so!

Great issue, minus Harry Hill and the free gift tearing my front cover, annoying me greatly... Loved Yore, Thingummyblob and Doctor Huh, Twit-ter and Bananaman were funny as well!

I wonder if the airport-distributed versions of this week's Dandy have the same gift? I know there are restrictions on what free gifts can be put on them - toy guns (or anything that looks like them, even if it's shaped as something ridiculous like a turtle) aren't allowed.

Good point John. Sheesh, what a climate of fear we live in! To think that as kids we expected the 21st Century to be an age of peace and understanding. (Apart from giant ants scuttling up skyscrapers or Mysterons taking over key figures that is.)

WizzKid; no Kid Cops for a while yet. They'll return soon.

I wonder how far removed people who complain about these kinds of 'violent' free gifts are from those who love to go on about how soft Dennis the Menace has got or how Desperate Dan no longer eats Cow Pies (though obviously he does). Perhaps these two groups could have a go at each other and leave the kids comics to the kids (old and young).

Ha! Good idea Nik. Although I get the feeling that some of them would be the same people complaining about both aspects. Crazy world.

I would be more intrested in just why the Dandy has decided to do a couple of issues with gifts on the cover and an increased price.. While even i can make a good defence for the prices these days, Comics and such did seam to raise pretty high and.. well.. are these toys even good enought to be worth a pound each?

Weren't most of those Gerry Anderson strips set in the late 21st Century - about 50 years after our present time ?

If I recall my TV21 scripture correctly, we still need to struggle through the years of rogue European states like the Berezniks before we reach the golden age of peace, love and giant ants.

As for the Mysterons taking over key public figures, am I the only one here who thinks that would explain a lot of recent history ?

Manic, as I understand it the increased price is mainly to give retailers a bigger incentive to stock those issues. Sadly it's a different world for comics than it was 20 or 30 years ago so publishers have to try harder to win over the big retail chains like Smiths, Adsda, Tesco etc.

However for that extra pound you're not just getting a toy you're also getting 12 extra pages. They are trying to play as fair as they can in this harsh business world.

Either the toy knife made some shops think twice about stocking it or it made kids buy it much quicker - either way it took me 7 shops to find a copy of it this week.

Thanks for your persistence Peter. The idea was for shops to order more copies although sadly I noticed my local WH Smiths had the usual two copies, and this week they were shelved behind a bagged pre-school comic. Hopefully other shops will have risen to the opportunity to stock extra copies, unless all they care about is selling sandwiches and chocolate now.