Convict Commandos and Ferret are back 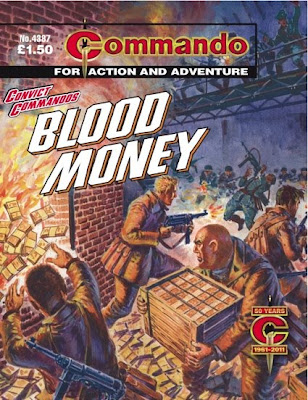 Here's the info on the latest batch of Commando comics that are in the shops now, and they include the return of recurring characters The Convict Commandos and Ferret plus classic issues from 1961 and 1980. My thanks to editor Calum Laird for providing the text and covers:

If there was one thing the Convict Commandos — Jelly Jakes, Smiler Dawson, Titch Mooney — liked, it was easy money. Unfortunately the money their leader Guy Tenby had them chasing wasn’t easy, it was very difficult indeed. For it was in Nazi-Occupied Norway and the Nazis didn’t want them to get anywhere near it. 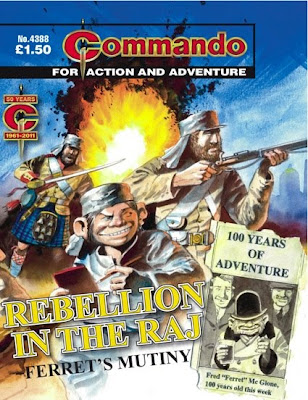 He’s back as you’ve never seen him before!
Veteran war reporter Fred “Ferret” McGlone celebrates his landmark 100th birthday in style — and reminisces about his earliest days as a roving newshound on the shady, cobbled back streets of Victorian London.
Naturally, that’s only the half of it. What about Ferret’s thrilling adventures on the high seas? Or his dangerous despatches from the front line chaos at the heart of the British Empire in India?
Get the inside scoop on this cracking story — a Commando exclusive, of course. It’s one you won’t want to miss! 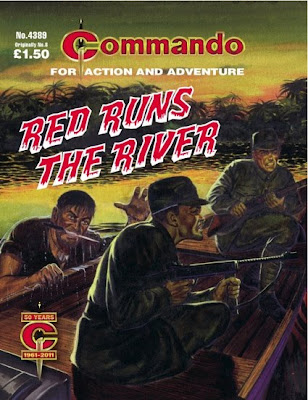 The early batch of Commando stories contained a fair few jungle tales — complete with fanatical enemies. But this one isn’t quite like the others as the fanatic is on the British side. He’s a fighting mad Irishman determined to settle a score with the Japanese, and any Japanese will do.
The trouble is that his own side need to keep him out of the fighting as he’s too valuable to lose.
Eric Hebden weaves a classic Commando here, ably backed up by Auraleon and Ken Barr.

Many and fearsome are the perils that can beset a man on a swift-flowing river after dark.
Japanese river patrols knew all these dangers, but armed to the teeth they feared none of them.
Then, one dark night, there glided into that gleaming river a new menace that was to strike terror into every Jap soldier…a swimming Irishman with hatred in his heart and a Commando knife between his teeth. 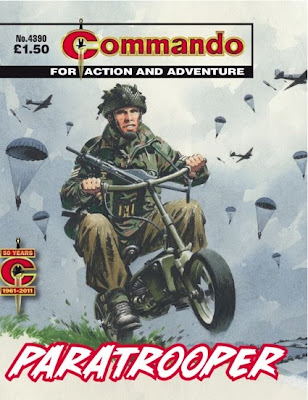 I’d love to tell you how I remembered this story’s memorable characters, well-thought-out, men-on-a-mission plot and action-packed finale from the day I first read it. I’d love to…but, to be honest, the thing I remembered most vividly from reading “Paratrooper” in 1980 was the awesome sight of British soldiers whizzing around occupied France on cool little motorbikes.
As a child I recall wanting to have a go on one of those dinky Wellbikes. Thirty years on, re-discovering this great tale has been a wonderful trip down memory lane (but sadly, not on a Wellbike). And, yes, I still want to have a go on one.

They floated out of the sky into the fields of enemy-occupied France. For this crack team of British paratroopers it was the moment of truth.
Dropped miles from their objective, a handful of determined men on their special Wellbikes set off to complete their mission. The odds against them were incredible but they had no alternatives. The fight was on…

Haha, I saw one of those bikes in a museum as a kid and was desperate to own one too! My dad has a Raleigh Wisp, which doesn't fold up but is similarly, erm, sparse. You have to pedal it to start it!

.... and the classic reprints finally get to 'Red Runs the River' from 1961 which is the one I mentioned back in January that I was waiting for, having briefly owned a dog-eared copy back in 1972/73.

Although I thought it was actually number 6 and the title is a little different and the synopsis doesn't sound like the story I remember.

That's probably because my memories have been overlaid with Darkie's Mob and Bridge on the River Kwai in the many years since - but it does make me wonder how much of the 45 year comic history in my head is actually reliable.