The Happy Couple, - Beano and Dandy get Royal 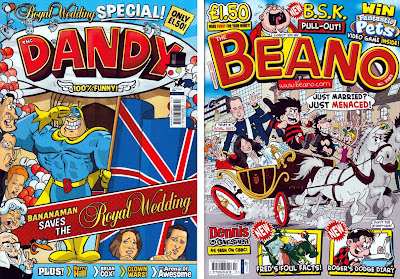 Commemorative issues with a Royal theme, whether for weddings or coronations, have been a tradition in British comics from the start, over 100 years ago. This week, both The Dandy and The Beano celebrate some wedding you may have heard about (that's taking place even as I type) in their own inimitable style.

The Dandy cover is drawn by Wayne Thomson (with vignettes by Jamie Smart, Phil Corbett, and Nigel Parkinson) whilst The Beano one is by Barrie Appleby. Inside, both comics have Royal Wedding themes although it doesn't dominate every page. This week's Beano also kicks off a slightly new look, with a few tweaks throughout the comic.

Royal issues have always been very collectible so buy a copy or ten of each and save 'em for your grand kids.

Also out now (from comic shops and on Amazon) is Kate & William - A Very Public Love Story. Another British comic (in the American size) written by Rich Johnston and illustrated by Gary Erksine and Mike Collins. (Rich and Mike were on morning TV the other day in a quick segment to promote the comic. Today, Mike is commenting on the wedding for Dutch TV!)

I haven't seen the comic myself but you can read a review of it at John Freeman's Down the Tubes blog here.

question about that comic is.. 1) is it offical, and 2) is the the one that is in two issues (one for each person) and then has a trade version or is it yet another one..

Personally, i know it's meant to be a big deal, but everything is going over board ¬_¬;

Yes, it's the comic that collects the two separate Kate/William comics. Is it official? Well, it doesn't carry the royal crest but it's a quality comic.

Yes, the hype about the wedding was O.T.T. and it's all bread and circuses as far as I'm concerned, so I didn't watch it.