Snow in July! The 2012 Annuals have arrived 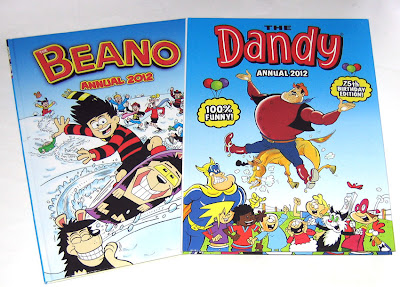 As mentioned on this blog a while back, this year the annuals are being published earlier than their usual late August / early September schedule. In fact The Dandy Annual 2012 and The Beano Annual 2012 are out now from DC Thomson.

Each book has a R.R.P. of £7.99 but you'll easily find them cheaper. (Amazon currently has them at £5.49.) I know some collectors like to wait until they find unsold copies in bargain bookshops after Christmas for a pound, but that doesn't really help the industry and if we all did that the annuals would cease to be.

The Dandy Annual uses a logo from 30 years ago to reflect its content of old and new characters. Fans will be pleased to hear that Bully Beef and Chips are back, now drawn by Laura Howell, and other favourites such as Corporal Clott, Brassneck, Beryl the Peril and Winker Watson also return. 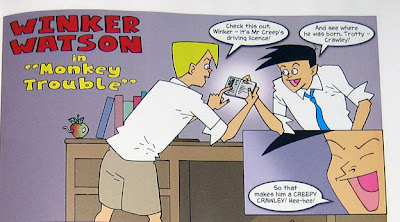 Traditionalists may not be so fond of the new styles given to some of the classic characters. I'm sure Nigel Auchterlounie's version of Puss and Boots will ruffle a few feathers with the over-thirties, but the strips are still funny, - what else does a kid's comic annual need to be?

Young fans of the current Dandy weekly may be a little disappointed to find so few of their new favourites in the annual. No Pre-Skool Prime Minister, no Postman Prat, no Harry Hill, and Nigel Parkinson draws a more traditional Desperate Dan than the revamped Jamie Smart version. However, Andy Fanton's George and Dragon are here, along with Korky, Bananaman, and Kid Cops. Then again, the kids will probably enjoy it all the same, just as I did as a child when annuals featured strips that were new to me. 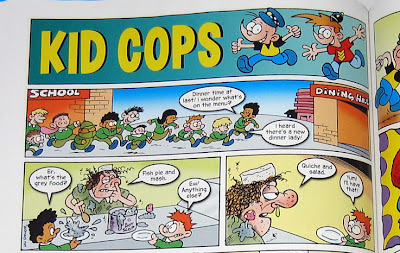 The Beano Annual includes all the usual long-term favourites Dennis and Gnasher, Roger the Dodger, The Bash Street Kids and Minnie the Minx. More recent hits such as Ratz are also on board, with some nice work by Hunt Emerson. 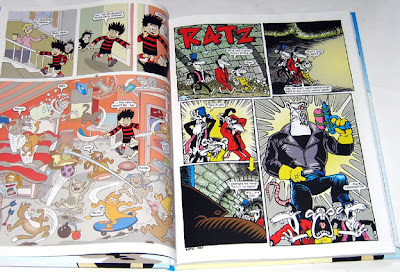 Fans of Calamity James will be pleased to hear that he's back, drawn by the brilliant Tom Paterson. 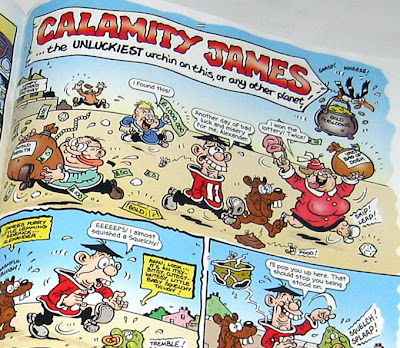 Several of the strips feature a winter theme, which feels a bit odd with the books coming out in mid-Summer, but they'll be on sale for a good while yet. One of the winter stories is my own Super School strip, - three pages set on Christmas Eve! I designed a traditional Christmas logo with snow on it. Hope it doesn't melt. 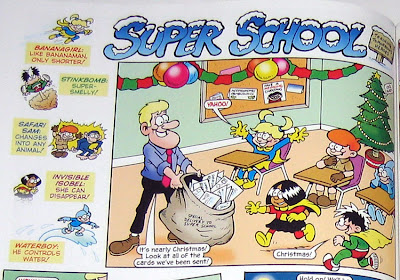 Lets hope the new Beano editor will bring back Calamity james for the comic..that annual piece you showed makes my day..

Is the Gift book out at the same time..

One of my favourite memories of my childhood christmases was opening my annuals! Bless my mum and dad, they'd always get me the Topper, Beano, Dandy and Buster among others! I hope the kids of today feel the magic with todays books that I felt back then. :o)

The annuals have changed a lot since my days as a Whizz Kid!

Peter, the gift book isn't out until September according to Amazon.

I am so excited about the Dandy Annual 2012, really want to find out who's in and who's not! The Beano Annual also looks great but I'm not as excited about that cos I know it'll just be the same stuff pretty much as last year minus Billy the Cat.

I'm upset that Pre-Skool PM and Jamie's Desperate Dan don't feature though. I like Nigel's version but Jamie's is my favourite.

What other new characters are in apart from GVD, Kid Cops and ones liek Bananaman and Korky? :)

Not many of the new characters Harry. The annual is produced too far in advance for topical celebrity strips and some of the newer characters were not around when the book was in production months ago.

There's still loads of good stuff in there though!

Harry - you can probably expect more post-relaunch characters in the 2013 Dandy annual. Bear in mind, it still hasn't been a year. But Harry Hill and The Bogies will both never appear for licensing reasons, and Little celebs will likely never show up due to it's topical nature.