Lazy journalism at The Sunday Times 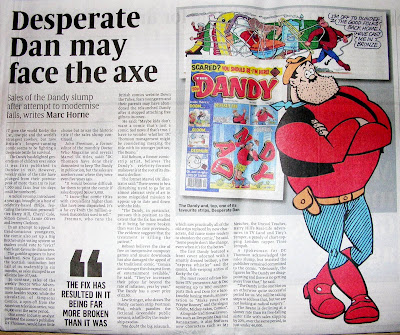 Last week's Scottish edition of The Sunday Times featured an article about the latest circulation figures of The Dandy. It contained comments from myself...

...except I was never interviewed for the paper. In fact I've never spoken to any Murdoch newspaper on this subject or any other.

The journalist who wrote the dreary, negative article (credited to Marc Horne) had lifted my comments out of context, and without my permission, from my blog post of August 31st. He claims that I'm "baffled" by the fall in sales, despite the fact that I'd actually speculated several reasons why sales may have fallen on the very post he took my comments from.

You'd think that after the phone tapping disgrace of the News of the World Murdoch's newspapers would be a bit more cautious about how they obtained their "news".

The Sunday Times has also suffered a drop in circulation by the way. Analyze that Mr.Horne.

My thanks to David Mackenzie for the scan of the newspaper.

I WISH everyone would stop saying these two things:

1) The newly, revamped Desperate Dan designed to appeal more towards a children's audience. For goodness sake, Dan changed to that 4 years ago!!

Hold on, 'Big Brother styled voting contest'? Excuse me Mr Marc Horne but I do believe it's called a reader's poll.

I really wish that before they start making these statements they actually see if they're true. Silly people.

hi lew,
very interesting, but im sure u are not surprised by any newspaper's news gathering tactics. So were you making a sarcastic journalistic point when you highlighted the mail's apparent "drop in sale"?
If the Dandy's change of direction had been a success with a doubling of sales maybe there would have been a positive story, but maybe any news story is still publicity, and the Dandy needs all the publicity it can get.
george

I think you mean the Times, not the Mail George.

It's just a lazy, scaremongering story in my opinion. I don't believe in the "No such thing as bad publicity" angle. It only leads to more pessimism.

They could have written it from a more positive angle, highlighting the modern variety of styles and ENCOURAGING readers to support Britain's oldest comic, rather than a negative view of celebrities. Unfortunately the media like nothing better than kicking someone when they're down. God forbid they should ever promote comics in a positive light.

They could, no, SHOULD, have contacted me personally if they wanted a quote, not slyly nick something from my blog. Of course I might not have given them the answers that suited their agenda. I understand they did the same with Kid Robson, taking comments from his blog without asking him and also quoting him out of context.

"Don't pay any attention to what they write about you. Just measure it in inches." Andy Warhol

The internet has spawned some seriously lazy journalism. I dislike "news" simply lifted from a Twitter feed or Blog.