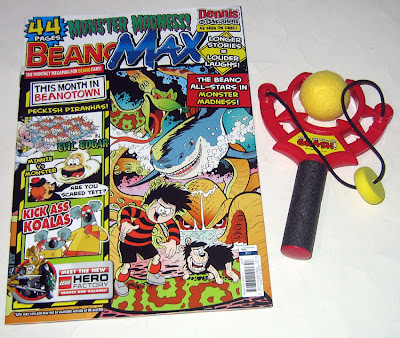 Super School, absent from The Beano for a while for various reasons, makes a return this month to the pages of The Beano's companion comic BeanoMAX. A pleasant surprise for me as I only drew this strip three weeks ago! 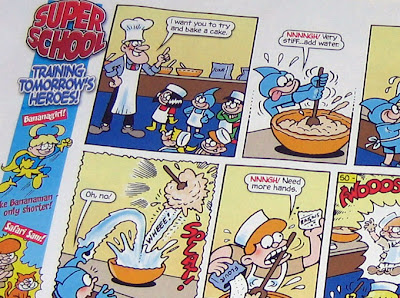 Good to see it making a return Lew - but a shame it's not in The Beano as my kids like the strip.

I don't know the exact economics of publishing for the reason of the price difference but I'd guess part of it was because BeanoMAX came with a cover mount.

Re: originated material. There's 15 pages of new material in BeanoMAX.

There's 23, not 18, pages of new material in the latest Dandy. You have to include feature pages and illustrations too, as they all come out of the budget if they're drawn by freelancers.

@Hackers, I'm hoping Super School will return to the weekly Beano later this year. I think this current one in Max may have been a last minute filler as it appeared so quickly after I'd drawn it. Nice to be in there though, as I can say I've worked for all four of the surviving non-reprint kids' humour comics. (Dandy, Beano, Toxic and BeanoMAX.)

Don't forget the 16 pages of Minnie in the pull-out section are printed sideways and contain two virtual pages of art per actual physical page - so shouldn't we count that as 60 pages total to make a fair comparison to the weekly ? I don't know that we need a two-page contents spread that simply rehashes the cover, but otherwise I think BeanoMAX is decent value for money.

My wife tried out the Gnash-apult and deemed it pretty lame compared to the one's from her chldhood. A tabloid-baiting publicity opportunity was missed. There's not enough force in the shot to even sting the target, nevermind creating a Dr Wertham "injury to eye motif" incident.

Er, forgive me if I sound like a prude for saying this but... doesn't the title "Kick-Ass Koalas" seem a bit "off" for a children's/tweens' comic?
Just wondering... :S

Yes, surprised me really but times change. I don't think "ass" is regarded as shocking now, as it's used a lot in other media that kids are exposed to. "Arse" would still be a no-no though oddly enough.