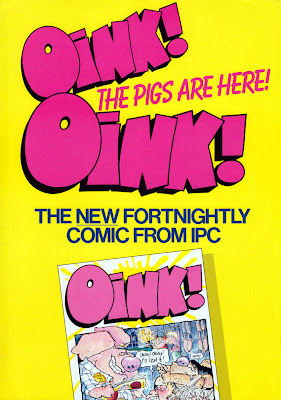 I'd forgotten I had this. Back in 1986 when Oink! was about to be launched, IPC sent a four page A4 promotional flyer to newsagents. I thought I'd show it here so you can see how Oink! was announced to the trade... 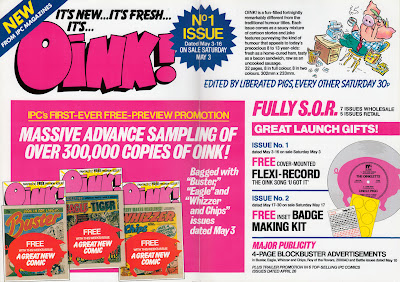 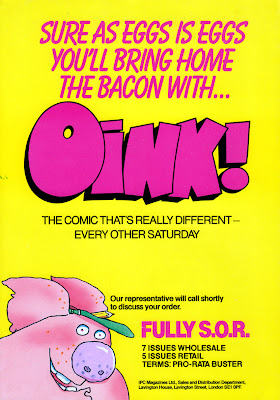 (As you may know, "S.O.R." means Sale Or Return, which newsagents always preferred because it meant they wouldn't be stuck with unsold copies as they would with Firm Sale.)

Instead of the increasingly expensive TV advertising that IPC had indulged on previous launches, this time the company decided to give away a full 32 page preview issue of Oink! bagged with three of their most popular comics. The contents of the preview issue contained the material we'd submitted in 1984 for the "dummy" issue (a mock up used by editors to convince management of a new comic's potential). It featured the debut stories of Tom Thug, Horace (Ugly Face) Watkins, Rubbishman and others who would become regulars in the fortnightly. None of the strips in the preview issue were repeated in the comic so the preview issue itself is a collectible item. Here's the cover by Ian Jackson... 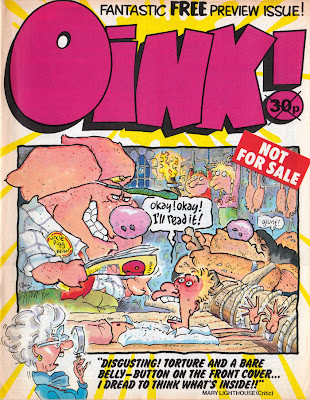 A few issues into Oink's run, another preview issue was bagged with a few other comics, but this time it merely reprinted issue 7.

I miss Oink!, I vaguely remember getting that promo issue with something or other.

Sadly it shared the fate of a lot of things that didn't speak down children and treated them like intelligent beings.

Am i right in remebering having to get it from the "top shelf" in my newsagents or have I made that up?

That preview issue of Oink was also given away with the NME.

I didn't know that Sean. Thanks.

Barry, you remember correctly. From issue 8 WH Smiths decided Oink was unsuitable for children and shelved it anywhere except in the comics section. This was before Smiths stocked Viz, so there wasn't even an adult comic section to put Oink into. Instead, they just bunged it anywhere that a kid would be unlikely to look for it. Fortunately many kids did seek it out but a lot of them didn't, and sales must have been damaged by such unnecessary action.

Once again a sad case of arrogant people thinking they know what's best for children, not caring that they were depriving kids of something that cheered them up and never did them any harm. Smiths were never even specific about what it was in every issue that horrified them so much, but Oink never returned to the children's section for the rest of its two and a half year run.

Protect them from what exactly?

Funny how the "protection" often backfires. My local newsagent thought that US monthlies corrupted children so they shared a rack with the adult detective magazines.

Eight year old me had to sort through a lot of lurid covers of models in fishnets to find the latest Fantastic Four or Legion.

I like to think it made me the man I am today.

My local shops had those spinner racks too, with the same combination. Good stuff!

Ah, the day when really good free gifts that had SOMETHING to do with the item.. you don't see stuff like that Vinyl these days.. Not that some of the free gifts are too bad these days, but (and i probably happened before) i remember from the 90s where Free Gifts that were related, like badges etc, were replaced by 'A package of small sweats'.. Much cheaper on the Company and i guess it attracted more people.. If you don't read the Beano, why would you want a Dennis the Menace Badge? its more of an item for a Fan..

A friend of a friend, does something I'm not really interested in.. Basically, Drawn Erotica comics.. Or at least, she did until things changed.. and she said one of the problems was with newsagents. This is in Norway, but she went into a local newsagents once and her adult comic was sitting next to the Donald Duck and other Children's comics, and blamed that as part of the reason for bad sales.. it works both ways. I personally think the Comics should have something on them saying the age group, but that's that. If the parents look at it and decide, it's okay for there kids, then it's fine.

It reminds me of a good article on Tom and Jerry where the writer pointed out, He grew up knowing (and partly being told by his parents) that it is a Cartoon, so it's okay. You don't hit real animals, and so, he grew up knowing how to behave.. Today, Parents would much more prefer to stick there kids in front of the TV and have that tell the kids things they should.. Or moan at Teachers for not telling the Kids it.

I might bring up the case about TinTin in the Congo (now an adult section album).. A shame really.

Norway used to have a very open attitude to comics. Although there was the time when both Christian AND Satanist groups objected to my 'Suburban Satanists' strips in HERMAN HEDNING comic and Egmont had to start putting a Mature Readers advisory on it.

It's a shame you haven't gotten around to doing an English trade paperback of Suburban Satanists. (wasn't 'Herman Hedning' Swedish though?)

HH was Swedish but there was an identical Norwegian edition published at the same time every month.

I intend to get Suburban Satanists out there in English in some format next year.

Oh fantastic, been wanting to read that ever since I put a face and name to your art Lew. Really good news.

Lew - I'd definitely buy that. Also the Brickman collection (from Elephantmen backups) if that materialises.

There's a number of comics I'd like to self-publish; Brickman Returns, Suburban Satanists, Combat Colin... but as ever it's a matter of finding the time. There's no money in the small press so I have to give priority to paid work. I hope to get far enough ahead with work in 2012 so that I can spend a few weeks putting together a self-published venture or two, but I've been saying that for the past three years. :)