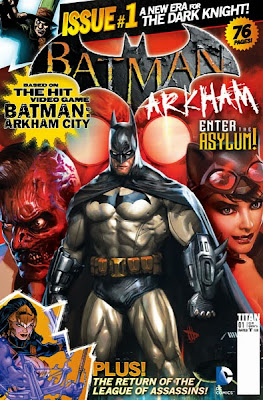 Titan Comics have launched a new Batman title in UK newsagents today. Batman:Arkham replaces their Dark Knight comic and continues the reprints of contemporary material from DC's Detective Comics and Dark Knight US comics alongside pages from Batman:Arkham Unhinged No.1.

Whereas Titan's Dark Knight comic was an A4 sized 52 pager, Batman:Arkham is a 76 pager in US comicbook format. This should help visibility in WH Smith, who often mistakenly shelved the Teen-rated Dark Knight comic alongside the junior titles such as The Beano and Moshi Monsters. Hopefully, the more distinctive smaller format will ensure that Batman:Arkham is shelved with Titan's other Batman comics and the Panini UK Marvel titles in the older readers section.

One point; although Batman:Arkham is £2.99, my local WH Smith charged me £3.99 as they claimed the barcode was wrong. I got a refund, but check your receipt when you buy this issue.

You can subscribe to the new monthly here:
http://titanmagazines.com/t/the-dark-knight/uk/subscribe/

No wonder it didn't scan. The barcode is blank!!

(In case anyone was seriously wondering about that, the image is one that Titan sent me, not a scan of the actual comic which DOES have the full barcode on the cover.)

I bought Batman Arkham on your recommendation but I didn't enjoy it. I didn't UNDERSTAND it! Ok it's been a good few years since I was a nipper reading Batman comics but the "art" is so murky now and the story just puzzled me!!! Who is "Penny one" Batman talks to? Why does the story start off saying only Catwoman and Two Face are free then we see Mad Hatter is free as well? Who was that girl who somehow ended up dead? For a first issue this comic explained NOTHING for new readers. I won't be buying no.2, and not at £3.99 that's for sure.

I didn't exactly recommend it, just reported on it. :)

'Penny One' is the codename of Alfred Pennysworth, Bruce Wayne's butler.

The Mad Hatter story is a different story to the one with the other villains, but it's not easy to see that because there was no end caption or story title between the two strips.

I didn't enjoy it either and won't be buying it again. I'm afraid that no DC Comic entertains me these days. Perhaps I'm too old for them, but they just seem too dark and vicious now. Give me late fifties Superman/Jimmy Olsen/Lois Lane stories any day for a lighthearted break from reality.