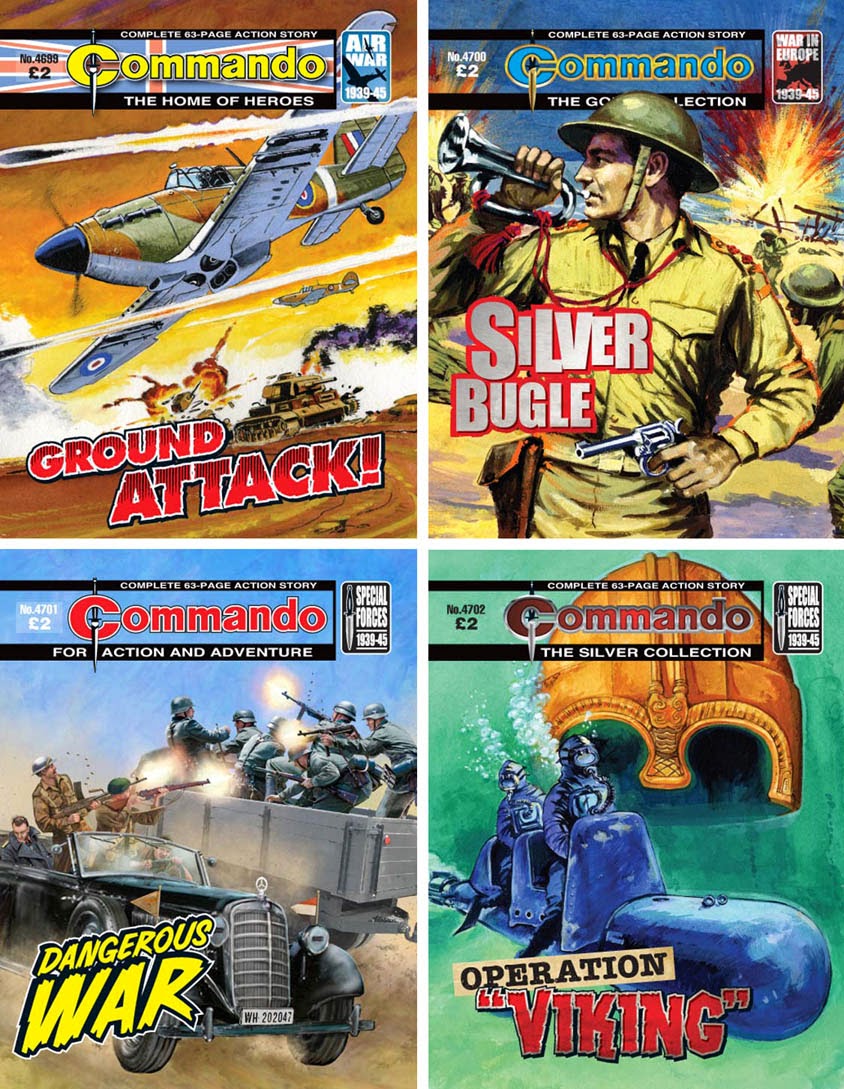 The latest batch of Commando comics were released a few days ago. Here's the info directly from DC Thomson...

The Hurricanes of the Desert Air Force were rightly feared by the men of the Afrika Korps. Screaming in from the searing blue skies, their guns wrought massive destruction. Pilot Officer Billy Hammond was one of the best of the ground attack boys, lightning fast, deadly accurate.
So they sent him to a new squadron with new kites and new weapons — PP-3s, fearsome three-inch air-to-ground rockets. The only problem was that they had sent him to a squadron where an old enemy waited. One on his own side!

This is the story of Sam Curtis, light infantry commander, of the silver bugle that went with him to war, and of the fighting tradition that began nearly two centuries before, with the first raid of the light “Bobs” on the enemy-held island of Walcheren, and the day a dreadful curse fell on the Domburg windmill…

Reading the title and looking at Alvaro’s thunderous cover, you might be expecting a story about a haunted bugle (or something of the sort). If you are, disappointment awaits. Not that this isn’t a good story, because it is, but because the Bugle very much plays second fiddle (sorry!) to the two principal characters and the gulf that divides them. It’s classic Commando warfare…between men on the same side.
Sostres’ inside art helps the mix along, with a striking mix of highly-detailed images backed with broader sweeps of the brush, his faces and expressions very nicely drawn.
So, follow the bugle’s call and try out what was originally titled Short Step Into Danger.

Lieutenant Jason Spark and his Commando team had completed another hazardous mission — blowing up an enemy radar station in Occupied France. While beating a hasty retreat, they found an unexpected prize — a high-ranking German officer who could provide the Top Brass with valuable secrets and intelligence.
All Jason’s team had to do was bring their captive in alive. Little did they know that even if they did that, an even more dangerous assignment would await them…

Norway, a proud country, lay under Nazi rule. Slowly signs of resistance began to show, the beginning of a bitter war against the invaders.
And although the defiant days of the marauding Vikings of old were long past, it was said that in one remote fiord the battle was being waged to the limit by the ghost of a Viking berserker many centuries dead…

Norway, with its icy Scandinavian landscapes and rich, Viking heritage, is an ideal setting for a Commando adventure. Set against the German occupation, here we have a brilliant yarn with a supernatural edge and a Berserker legend at the heart of it.
Featuring some exciting interior art by Denis McLoughlin and Ron Brown’s atmospheric underwater cover, we hope you agree that this is great fun. You’d go berserk if you missed out!

These look pretty good. I might pick up a couple on payday.

Yes, they do a good job with them. I haven't seen these issues myself yet but it's good to know that Carlos Pino is still getting work.