The Beano on Sunday 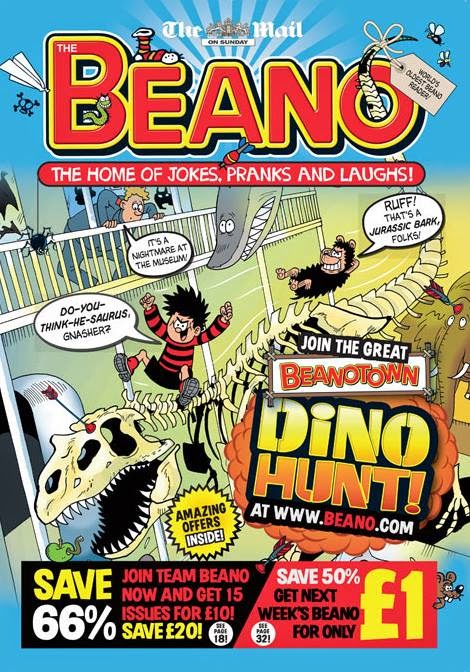 It's not a newspaper I'd usually buy but this weekend I'll make an exception because The Mail on Sunday on April 6th will contain a very interesting free gift, - a complete 32 page all-new edition of The Beano with a print-run of 1.5 million! All the strips are linked to the current "Gnasher's Gone Missing" story to greater or lesser degrees.

The Beano has created a special issue that will appear as a free sampler with The Mail on Sunday on 6th April 2014.  The sampler will also be available as a digital edition for Mail Plus subscribers.

DC Thomson Marketing Manager Cathy Frossard said, “This is the first time we’ve sampled The Beano as widely as this and it’s great to be doing so with such a prominent national title.  The Mail on Sunday will open The Beano up to a wide-ranging audience and we’re hoping that, with over 1.5 million copies of The Beano going out with the title, we’ll reach new readers.

“As an additional bonus, we have also agreed for a digital edition of The Beano sampler to be made available to Mail Plus subscribers allowing us to reach online fans too.”

Gnasher is still missing.  The special issue of The Beano will feature a guest appearance by Bear Grylls, when Dennis the Menace calls upon Bear to use his tracking skills to help look for Gnasher.  The sampler will also provide readers with an exclusive first look at a map of Beanotown.  Using a print/online integration app, readers will be encouraged to ‘blipp’ between the print edition and beano.com where the map is hosted.  The map features 75 iconic Beanotown locations including the homes of Dennis the Menace, Minnie the Minx and The Bash Street Kids.

The Beano Editor Craig Graham said, “We’ve created an amazing special issue of The Beano for this sampling opportunity.  It’s packed with jokes, pranks and laughs – I hope The Mail on Sunday readers can deal with Dennis and his wild ways!”
http://www.dcthomson.co.uk/media/the-beano-samples-with-the-mail-on-sunday 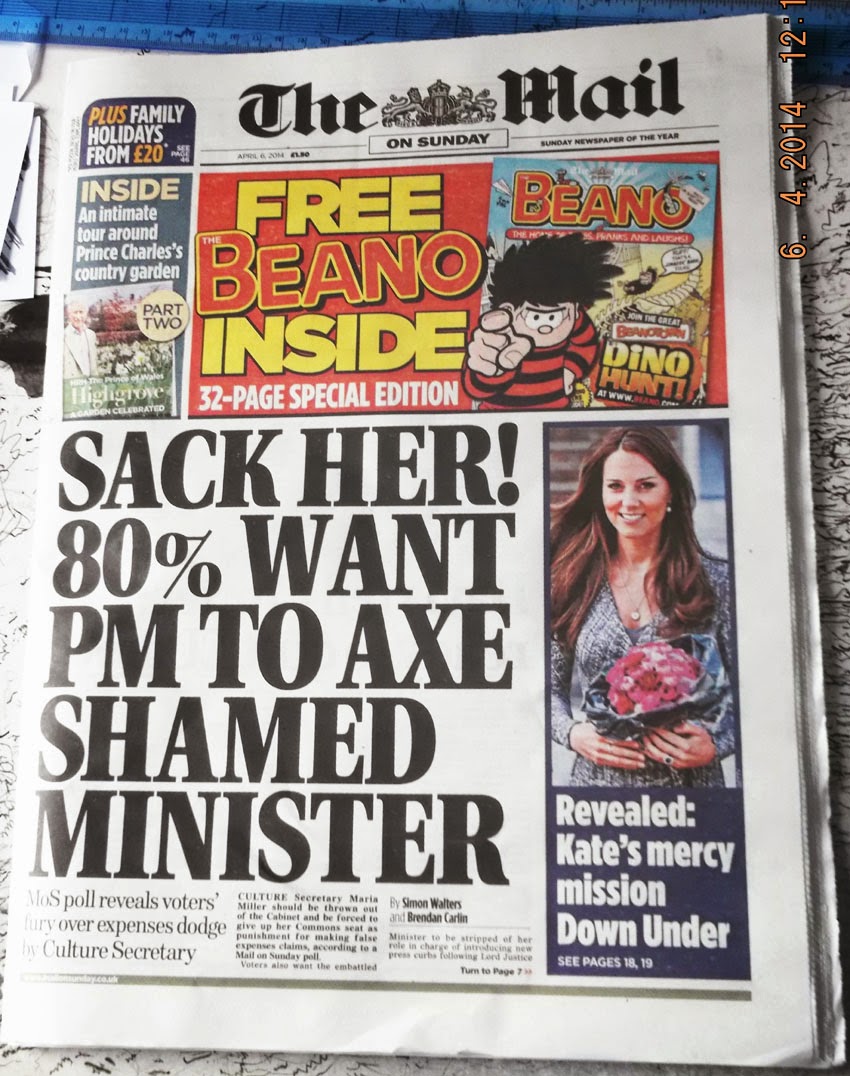 Email ThisBlogThis!Share to TwitterShare to FacebookShare to Pinterest
Labels: Mail on Sunday, The Beano

Hopefully a few copies will go on ebay afterwards so I can get one :)

I really hope this Gnasher vanishing story isn't the same as the 1980's one where he had several pups - I'd be very disappointed if it was...

when they say first look at a map of beano town, they mean a new one? there have been maps before..

either way, sounds like an interesting idea to try the tried and tested sampler method. Hope it turns out well.

Manic, same map as that seen last year, but it only takes up half a page. It's just a guide for new readers to show them where the characters live in relation to each other.

Been meaning to say this for awhile but its great to see you blogging again Lew. It's a real highlight of the day to read one of your posts. On the subject of the free Beano I went straight to my local Newsagent and bought the pale.r Sadly there wasn't a bean in there and neither in any of the other copies when I went back there. I guess I have to keep a watch on ebay :-(

That's not good. Someone on the Comics UK forum said theirs was missing too. It should be inside the bag, with the other supplements.

Thanks for the kind words re the blog. I try to update it as often as I can. Some vintage stuff coming up this week hopefully.

Thanks for getting me to waste £1.50 on a 'paper I loathe only to find the Beano wasn't in it. April fools day was last week you idiot.

Whoa there, anonymous. How is it my fault if the printer has failed to bag up all the comics? Think before you post next time. In fact, don't bother posting next time if you can't do it without insults.

You present yourself as a spokesperson for the Beano, posting their press releases so you take the rap. Simple as.

I'm not a spokesperson for The Beano. I'm a freelancer, and a blogger. And you're a troll. Into the abyss you go. Bye!

quick call the god of thunder...its his job deal with trolls lew paul

Wow what a truly stupid reply from "Not a happy bunny" I mean even for a troll that's plain daft (sounds like he's a "Sunday Sport" reader to me lol) Anyway I picked up the "Mail on Sunday" today not knowing about this and only as the Scottish papers were all sold out (Sunday Mail, Post, Herald etc) and although I'm not a reader of this paper it has a best of the rest (UK national) Scottish football section - But have to say it was a really nice give away and will be interesting to see if it results in new readers in the future - do DCT publish figures on their sales? (nice to se Hunt Emerons work as well)

Just for the record that wasn't me Lew! How anybody can blame you for this is beyond me.

I know it wasn't you, Phil. No worries.

Paul, yes, The Beano publish their ABC figures. I've covered it in the past. Let's hope this freebie increases sales, to quieten the doom and gloom merchants if nothing else.

The news has been on here and on forums and Facebook for two days now though. I also posted a link on Twitter.

It appears some copies of the Mail had no Beanos inside them and others had as many as four!

Was there an article about the Beano in there?

The last newspaper I read was The Guardian 18 months ago on Obama's election win. It would take a lot to persuade me to buy the Mail or Sun and I don't think a free Beano would do it but if it helps it to reach a wider audience I suppose that's a good thing.

Looks like the DCT daily The Courier will be giving away the same issue with this Thursdays paper. Not sure how they will distribute it - will it be in every copy or will you have to ask but as The Courier is widely available across most of Scotland it should be easy to find a shop selling it but not necessarily with said free copy.

Thanks for that info, Duncan.

George, no article in the paper as such, but there was a full colour ad taking up most of page 22. I'll add it to this post shortly.

It was given in the Irish Mail on Sunday as well, and my Mother bought it for my young fellah, great idea.