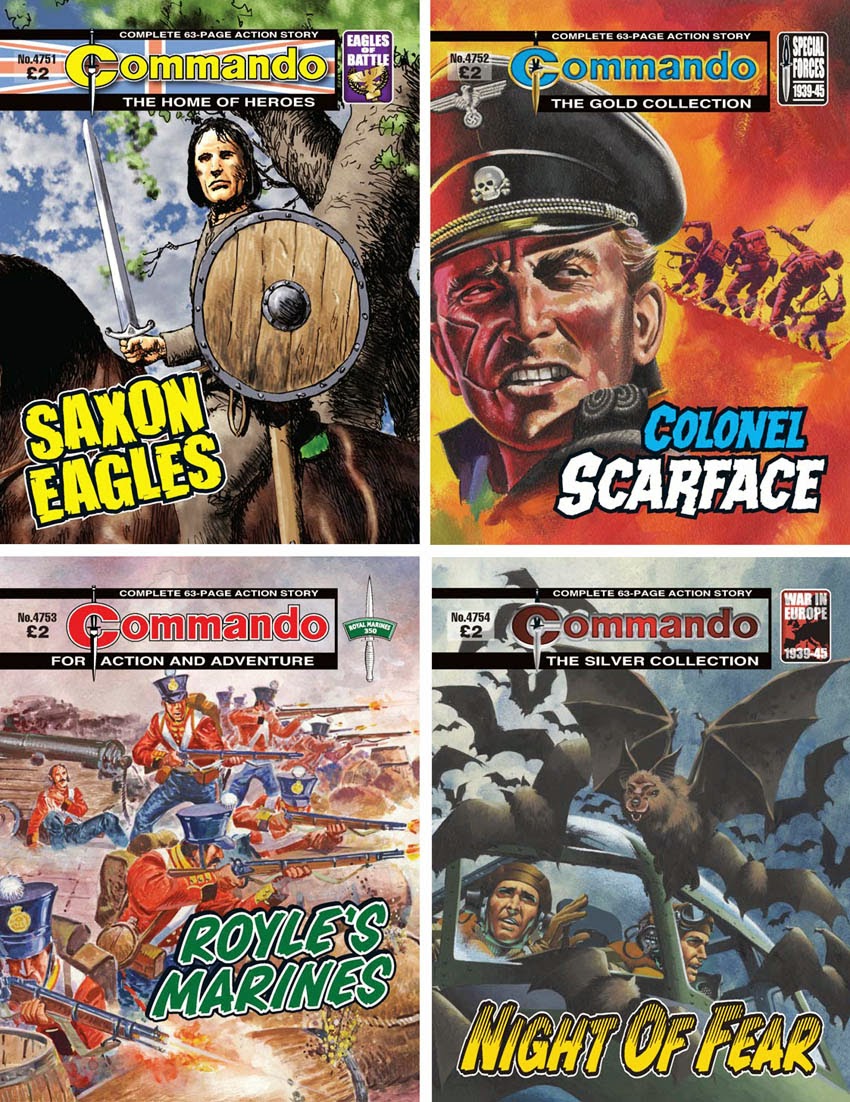 The 9th Century AD was a turbulent, violent time. Anglo-Saxon Britons had to fend off constant attacks from marauding and blood-thirsty Scandinavian warriors — the much-feared Vikings.
Young Cadric was a Saxon — brave and willing to fight to defend his village from Viking hordes. As he did so, though, he had to face an equally deadly, but more sinister, enemy from closer to home.

All occupied France went in fear and trembling of him — ruthless SS Colonel Ludwig Bauer — a monster in the guise of a man.
But one day Bauer went too far with a young Commando lieutenant, Rick Matthews. And Rick stayed behind after a raid in France to teach Colonel Scarface, step by blood-stained step, what it was to be afraid…

Despite what Ken Barr’s magnificently menacing cover might make you think, this story isn’t all about the nefarious Colonel Scarface. It’s more the story of Lieutenant Rick Matthews, Commando. What’s more, it’s also a French Resistance story, a type that’s very difficult to make successful as there’s often not a lot of action to play with. The script neatly avoids tense, cliff-hanging moments by being filled with the crash and thunder of battle. All very well drafted by Gonzales.
Lastly, watch out for the comedy moment on page 55. You have been warned.

After firmly putting a bully in his place with a well-aimed punch, young Thomas Markham knew he had to make himself difficult to find. He was helped by Sergeant Ned Royle who suggested joining the Royal Marines and losing himself there.
While he was now out of plain sight, young Thomas was not out of danger for he was shipped off to fight in the Crimean War. There his mettle would be tested in the heat of battle as one of…
ROYLE’S MARINES

2014 is a truly momentous year for the Royal Marines as on the 28th October we mark our 350th birthday, completing three and a half centuries of unbroken service, committed, as an integral part of the Naval Service, to protecting and promoting the United Kingdom’s security, prosperity and reputation, both and home and overseas; truly 350 years of Timeless Distinction.

Formed in 1664 as the Duke of York and Albany’s Maritime Regiment of Foot, the Royal Marines, the modern Royal Navy’s “go anywhere force”, have evolved into the United Kingdom’s commando forces, held at high readiness and trained to operate anywhere in the World and carry out the full spectrum of operations, be that peacekeeping, disaster relief, military training/advisory teams, specialist amphibious operations and high intensity combat.

Now, whilst the stories contained in the Commando Comics are obviously fiction, there are numerous common values shared between the characters, the Corps today, and our illustrious forebears who have served the Corps and the Crown so well since 1664.  The Royal Marines Ethos is based on characteristics of courage, determination, cheerfulness in adversity and selflessness and they have stayed true throughout our 350 year history and have enabled the Royal Marines to be involved in virtually every one of the United Kingdom’s conflicts, and notably to have seen active service every year since the outbreak of World War II to the present day, with the sole exception of 1968.

Today’s Royal Marines remain at the forefront of the United Kingdom’s crisis response force and are a key component of the Government’s conflict prevention agenda. Through our World-renowned brand of understated professionalism we hope to remain there for another 350 years and more.

Transylvania — an eerie land of legends, of werewolves and vampires, of hauntings and spine-chilling screams in the dark.
Not the most welcoming place in the world to crash-land in at dead of night — especially when your Mosquito has been damaged, not by Nazi flak…but by a swarm of thousands of large, black bats!

Just imagine…
A spooky castle in darkest Transylvania —
The sinister Count who dwells there —
Waited on a by creepy assistant —
Swarms of large bats flying out of nowhere —
Night of Fear may not be the most subtle Commando ever published — but it is certainly a hugely entertaining one. The influences on the plot — Hollywood vampire movies and American horror comics — are actually acknowledged in the text, so, nearly 40 years on this remains a fiendishly fun read.
So, trick or treat?
In my humble opinion, this is definitely a treat. Happy Halloween!

Thanks for that Lew, I will keep an eye out for the John Ridgeway one, looks interesting!
I have been reading a bit on Saxon and early English myth lately, I knew little of it, some great tales. This will fit into my current reading pile nicely.

Glad it was of some use. These Commando posts rarely generate comment, but I think that's because some other blogs also receive the same press release.

It's good to see Commando venturing outside of the two World Wars again. As DCT's only surviving adventure comic it seems a shame to confine it to the 20th Century battlefields.