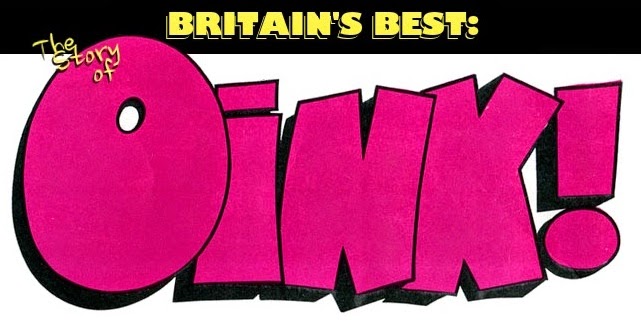 Many of us who started our comics career in the 1980s were spoilt in a way because we had the ultra-brilliant Oink! to work on. Oink! was a humour comic like no other. It's often unfairly and inaccurately described as a "junior Viz", and publishers IPC may have initially wanted something like that, but Oink! was unique and had its own style (or 'sly-le' as they might have put it). Some of us were quite raw in our abilities when we started but Oink! gave us chance to develop and experiment.

Unlike other humour comics of the time, Oink! had no formula, no house style. The art styles were varied, the content was ever-shifting, the attitude was more irreverent, the humour was cheekier. So different it unsettled the establishment, and WH Smith moved it away from the children's comics section in a bizarre attempt to prevent its intended audience from seeing it! That undoubtedly cost the comic a lot of potential sales, but many of its loyal readers stuck with it, as evidenced by the anecdotes and recollections on the Oink! Facebook group.

One of those loyal readers, Phil Boyce, even set up an Oink! Blog, and now he intends to publish a book telling the story of the much-missed comic. Here's what he had to say:

"It's Oink!'s 30th anniversary in two years and I'm officially announcing a brand new book to mark the occasion.  It's planned to tell the whole story, from initial conception right through to the Round the Bend TV series and then on to the modern day.  The story of the comic was already a fascinating one, but there's much more to tell believe me!  Alongside this the book will contain a good, hefty amount of the very best in strips and features from the comic and what is surely the greatest team ever put together for one - as the front page of The Oink! Book 1988 stated, they were "Britain's Best!".

While this blog is very much my own personal journey through Oink! from the perspective of a fan, the book is going to be the creators' tale - their take on our very favourite comic."

This is very exciting news indeed for ex-contributors to the comic and for its fans. For more information, read the rest of Phil's post on The Oink! Blog here:
http://the-oink-blog.blogspot.co.uk/2014/10/working-on-title.html

Phil has only just announced his plans so there's a long way to go yet but keep checking his blog for developments. I'll also post more news here of course, as the book comes together.
Posted by Lew Stringer at 10:52

Email ThisBlogThis!Share to TwitterShare to FacebookShare to Pinterest
Labels: oink

Thanks very much Lew for spreading the good word! Exciting times ahead...