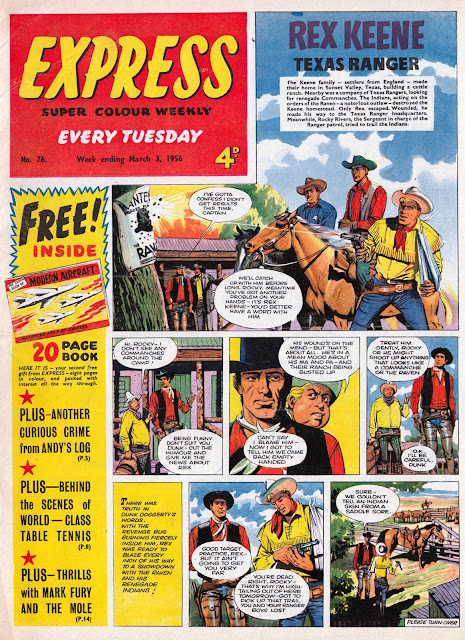 The other day I showed a few pages from an early issue of Junior Express from 1955, and now here's a selection from the comic it morphed into a year later. With issue 74, the title condensed to Express and the format changed from newsprint into glossy photogravure, adding full colour to some of its pages. Its similarities to Eagle are fairly blatant, and it was clearly intended to rival the famous paper.

This is issue 76, dated March 3rd, 1956, the third new look issue. Rex Keene, the Western strip on the cover and page two, was drawn by Harry Bishop. 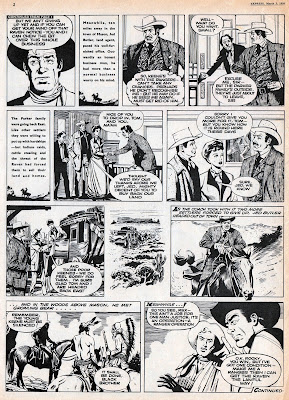 Page three gave us The Bold and the Brave, illustrated by the great Italian artist Gino D'Antonio, who also drew many Fleetway libraries amongst other strips. This page alone is a masterpiece of black and white comic art. 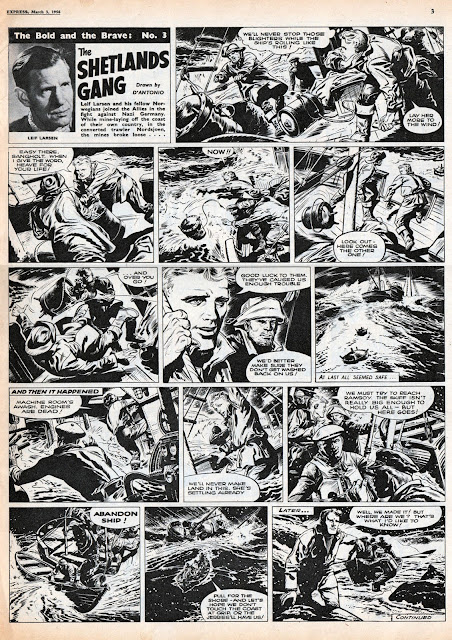 Express also featured text stories and features. Here's The Mystery of the Marching Feet, and an advert for Mars bars, then only 6d (two and a half pence in decimal currency). 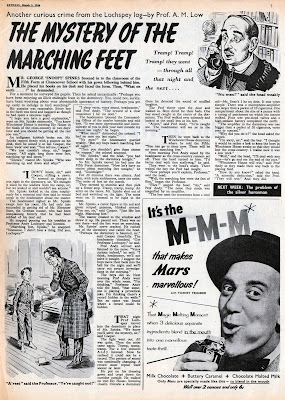 The centrespread of this 20 page issue featured new Jeff Hawke stories in colour. I believe this is the work of Ferdinand Tacconi. At the foot of the spread, an advert for Murraymints. Remember those? "Too good to hurry mints". 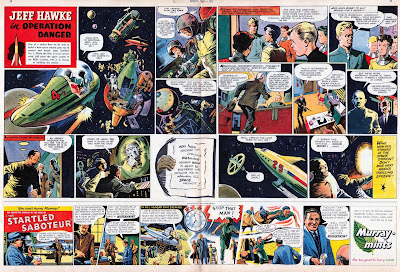 On page 14, the saga of Mark Fury, with wonderful art by Peter Jackson, the perfect choice to illustrate historical drama. 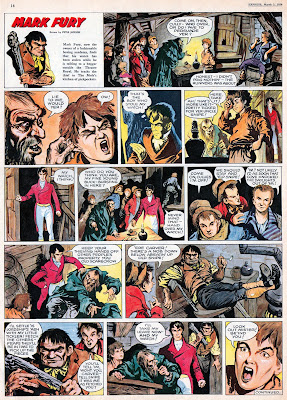 Bengo by Tim was still in the comic, now resized as a quarter page box. Incidentally, this situation happened with me and my old dog too many years ago, as she eagerly jumped for a biscuit, accidentally butted my nose with her snout and gave me a nose bleed. Fellow animal lovers will understand that I've always considered that a happy memory, so I was amused to see it depicted in a strip. 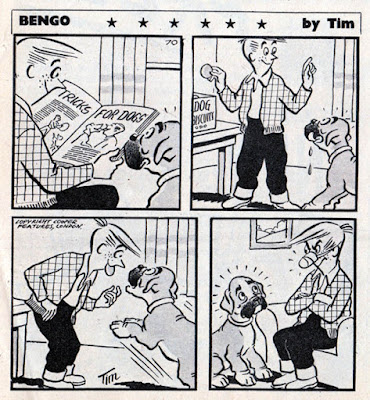 Slick Nick is a curious item. I thought it might be the work of Wally Fawkes (Trog) or Peter Maddocks but I'm not sure its either of them. Can anyone identify the artist? 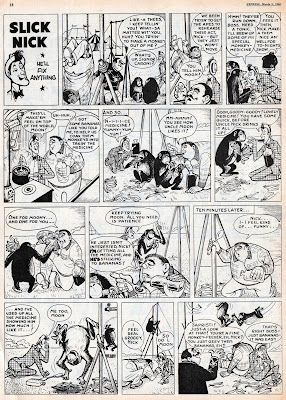 Express would undergo even more changes over the next few years, ending up as TV Express before merging into TV Comic in 1962.

(Thanks to Ray Moore for identifying some of the artists in a post he submitted to Comics UK years ago.)
Posted by Lew Stringer at 22:25

Great looking comic Lew, The Jeff Hawke section looks great, any clue as to the writer?

I don't know, sorry. If only more British comics had allowed creator credits back then!

I wonder why that quick patch up lettering job in one panel of slick nick.. that "I'm" and "He's" is pretty rough..

It's not a patch up job. It's deliberately in bold for emphasis because it's the monkey who should have received the medicine.


Jeff Hawke by Ferdinando Tacconi, from 74 to 83 (Centerspread)