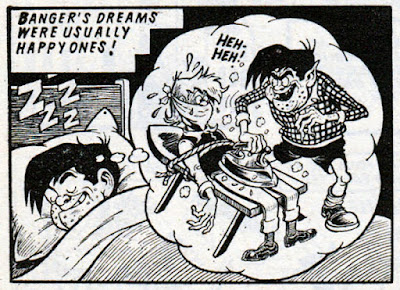 For many of us, Ken Reid's work reached its hilariously manic best with Jonah and Roger the Dodger for The Beano in the 1950s and then in the 1960s for the Odhams comics Wham! (Frankie Stein), Smash! (Queen of the Seas, The Nervs) and Pow! (Dare-A-Day-Davy). A body of work proving him to be a master humourist.

Curiously, when the Odhams comics fizzled out and were replaced by IPC's new humour titles Whizzer and Chips, Cor!!, and Knockout, Ken Reid's work was nowhere to be seen. Was this Ken's decision, or was his work considered too dark for the more conservative IPC funnies? (He did contribute to the next wave of humour comics, Shiver and Shake and Whoopee! but initially only to illustrate the back page pin-ups, and what great work he did on them.) Given that IPC management axed The Nervs in 1969 because they felt it was over the top and should never be reprinted, I'm betting they didn't want him on their new funnies. Their loss.

Fortunately Ken did find work on the IPC adventure comics at that time. Perhaps it was felt he was more suited to the slightly older target audience? I've already covered his early work for Scorcher (more on those strips in a week or two) but he also produced Faceache for Jet of course and a great humour page for Valiant.

Banger and Masher had the simple premise of two kids creating new ways to knock seven bells out of each other every week, all in Ken's own fantastic way of course . The strip ran for a year, from Valiant 4th July 1970, to the issue dated 3rd July 1971. Here's a selection of some I consider to be the best. Click on the images to see them larger... 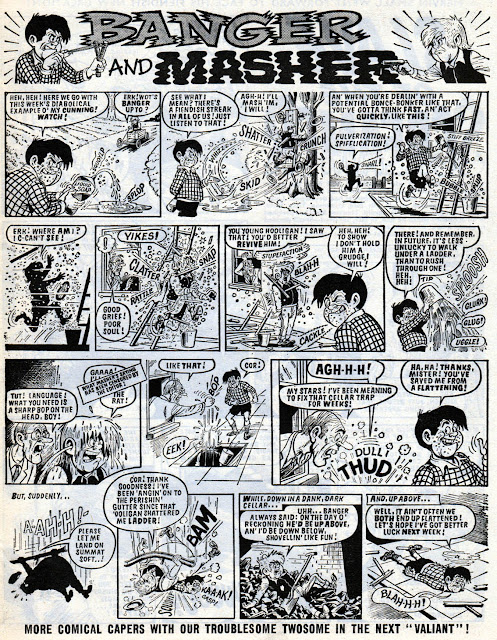 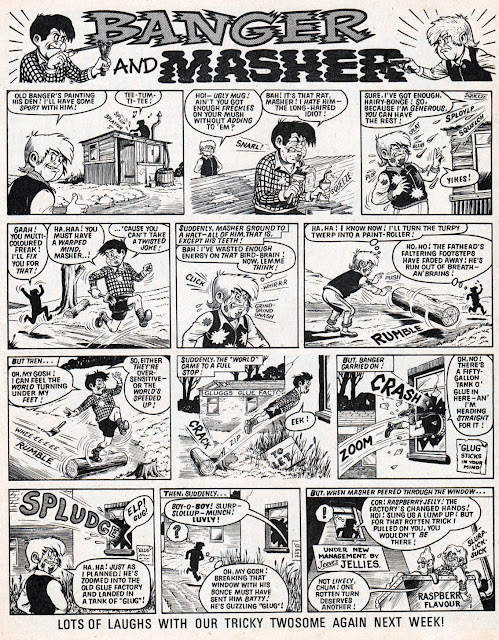 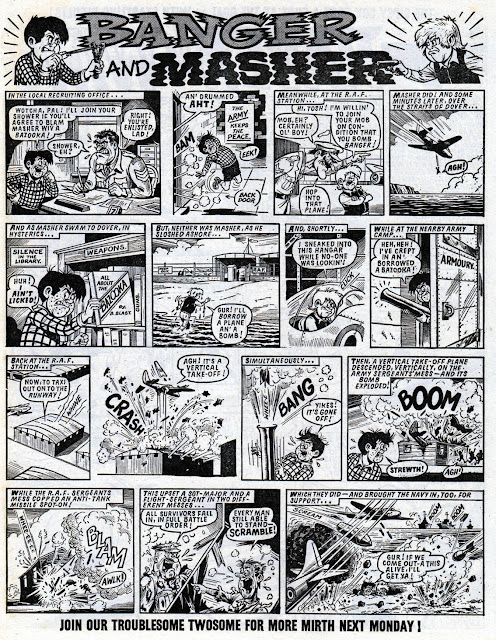 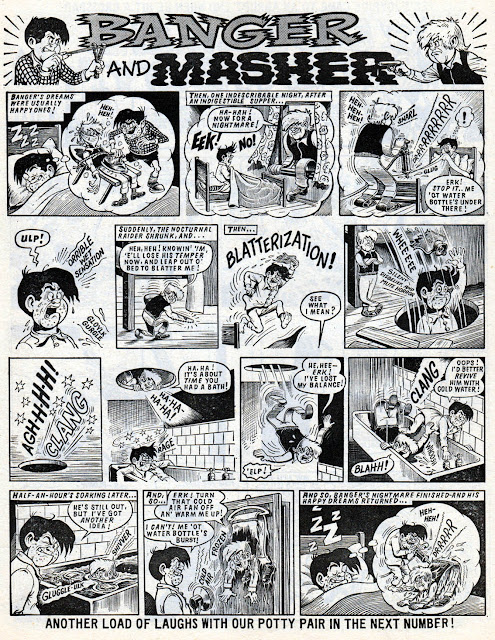 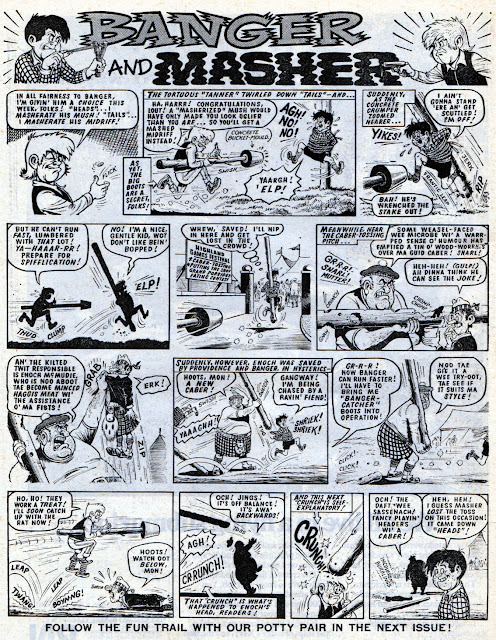 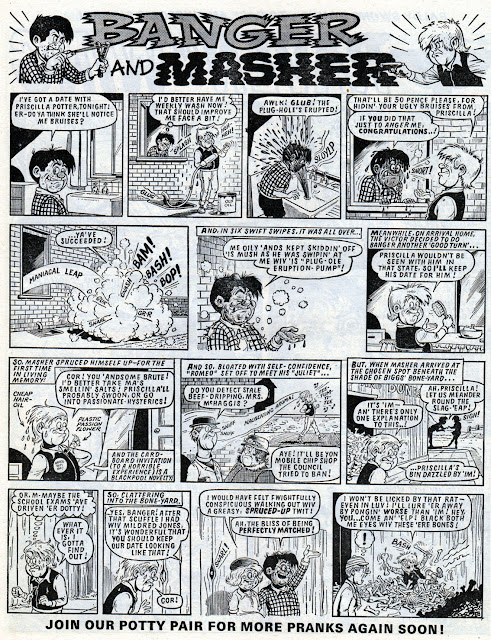 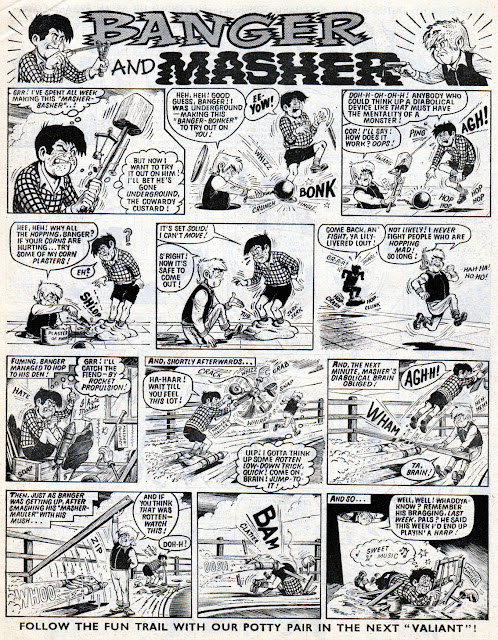 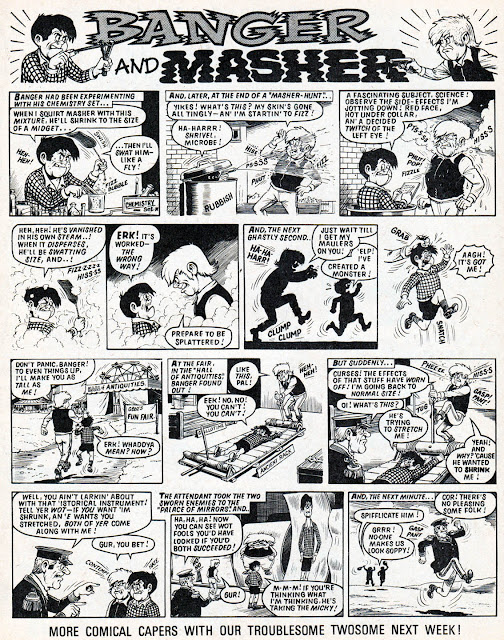 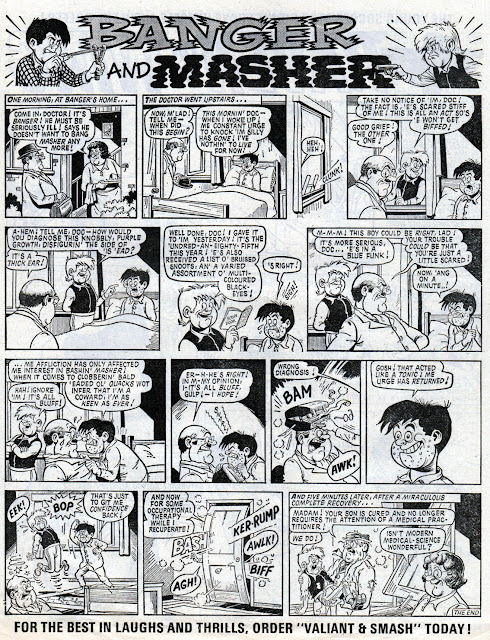 Thanks for a very generous helping of one of my favourite strips from my primary school days. Absolutely wonderful.

Thanks John! Glad you enjoyed them.

Great blog Lew, wish there was a best of Ken Reid book out there Ian

I can't see it ever happening unfortunately. Neither Time (who own the rights to IPC stuff) or Egmont seem interested in marketing their old humour characters.

This is an astonishingly effective comic strip, which I hadn't seen before! The armed forces one in particular is a beautifully-staged escalation of comedy violence. Marvellous stuff - thanks, Lew!

Thanks Chris, Ken. I think the strip slipped under the radar of a lot of readers because a) it only lasted a year, and b) it was in a comic not usually associated with Ken Reid. Great stuff though, easily on a par with his previous work.

I don't recall reading any of these strips and they are all excellent, so I will add my thanks to the others here for showing these Lew. I see a wee bit of "Dare a Day Davy" in the character design of "Banger", For me this was Kens last top notch strip (along with "Faceache") after that the ideas seemed to (for the most part) dry up as probably did the work for Ken - great stuff by one of the all time greats

I always remembered him from my childhood as the genius behind 80 or so episodes of Dare A Day Davey, but until I started following your blog a few years back I hadn't realised he had left such a wide body of work.

I guess in some parallel world it's possible to log onto Amazon and order a copy of The Absolute Ken Reid but, in our reality, I'll keep watching for your posts.

Thanks Tony. Ken didn't draw a huge number of strips over the years but they're all classics. Quality, not quantity was his method I think. An average of two pages a week, from what I can gather.

Paul, yes, there's a similarity in most of the expressions of the kid characters he created. Roger the Dodger being another example. It worked so well too.

Sorry, I meant Ken didn't draw a huge number of different strips. He did turn out a lot of pages over his career of course.