25 Year Flashback: The Daredevils No.7 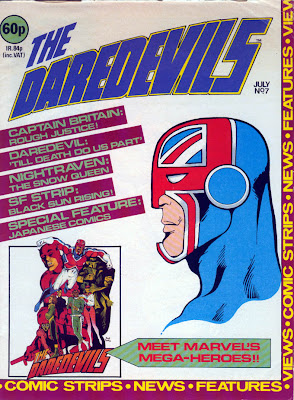 If you'll forgive me being a little self-indulgent on this blog today, this month marks 25 years since I had my first work published in a professional comic. The title was Marvel UK's The Daredevils and the job was a pocket cartoon entitled What If Iron Man Really Lived up to his Name? 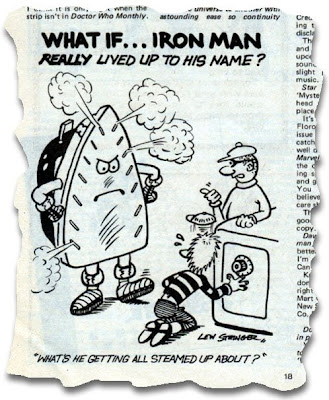 Looking at it now, the style is crude and the gag very lame, but seeing it in print back in 1983 gave me a huge boost to my self esteem. At the time I was on the dole, having quit a dead-end office job, and had been trying to break into comics for a couple of years with no luck. (In retrospect it's understandable I made no initial headway because my work simply wasn't professional standard then.)

I'd been producing several fanzines and small press comics in order to gain experience and feedback, and Alan Moore (whom I knew from the Westminster Comic Marts and inevitable pub-meets) suggested I try Marvel UK with some ideas. He introduced me to Marvel editor Bernie Jaye in February 1983 and she asked me to submit some work. I soon came up with a variation on Marvel's "What If...?" series, sent in a bunch of cartoons, and at the April Westminster Comic Mart Bernie told me she'd be running them in The Daredevils from issue 7. I was on cloud nine for the rest of the day.

The rate was very low, - £5 a cartoon. Not enough to enable me to get off the dole at that point (and yes, I did declare it) but what it gave me was far more important, - the encouragement to carry on. Prior to that, I'd been on the verge of giving up my ambitions to be a cartoonist, but the euphoria of seeing my work in print gave me the confidence and incentive I needed. After that, more work followed and I went full-time self employed early in 1984. It's true what they say; once you've been published it gives other editors the assurance that you can do the job. All thanks to Alan Moore and Bernie Jaye.

Enough of my "origin story". What was the rest of The Daredevils like? In a word, brilliant. A 56 page package of strips, news, and features, - and what content! This is the comic that featured Captain Britain by Alan Moore and Alan Davis (competing with themselves at the same time on Warrior's Marvelman). Curiously, this issue (No.7) features parallel world homages of a few famous comic characters such as "Android Andy" (Robot Archie), "Tom Rosetta" (Tim Kelly), and.... "Miracleman" (Marvelman). Interestingly this was before Marvel's lawyers forced the name change from Marvelman to Miracleman, so technically this is the first appearance of "Miracleman" in comics! (Just one panel too, - he's killed outright.) 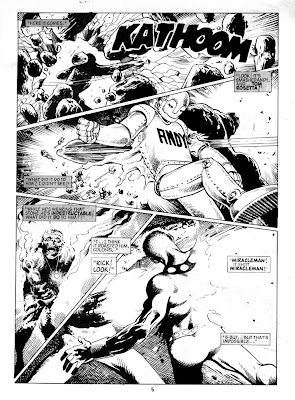 The other strips in the comic were reprints of Frank Miller's Daredevil and a Sontaran back up from Doctor Who Weekly by Alan Moore and David Lloyd. One other item was a brand new Night Raven prose story by Alan Moore with illustrations by Alan Davis. 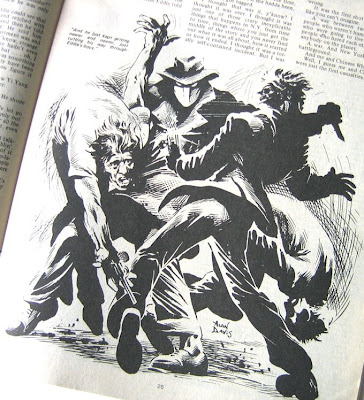 If you're starting to think this was practically "Alan Moore's comic" you'd be right. Alan even wrote a regular two page fanzine review feature! Alan was a great supporter of the small press in the 1980's, partly because we fanzine editors would give / sell him copies in the Westminster Arms and he was too decent to tell us to shove off, but mainly because he had a genuine affection and interest in the publications. This was evident in his reviews, written with warm enthusiasm, good humour, and helpful criticism where needed.

Having fanzines reviewed in a comic available in newsagents must have introduced many new readers to fandom for the first time. Alan was doing everyone a good service here, and I'm sure it must have benefited the industry in many positive ways. 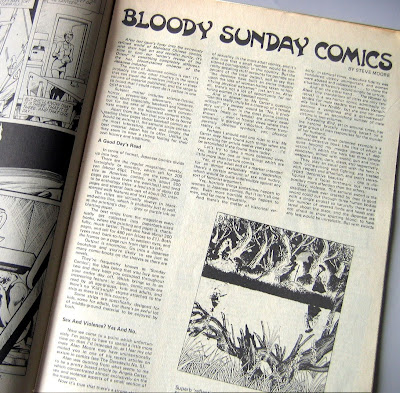 The Daredevils No.7 also featured a three page article by Steve Moore (who fifteen years previously had been "Sunny Steve Moore" of Odhams' Power Comics). This article is significant in that it provided a brief history and summary of Japanese comics. Bear in mind that 25 years ago Manga was unknown in the UK, at least to non-Japanese residents, - hard to believe when one sees the display stands in Waterstones today. Therefore Steve's article (Bloody Sunday Comics, - because apparently most Japanese read their comics on Sunday) basically introduced British kids to Manga for the first time. It even ended with details of where to find these strange telephone-book sized comics ( the Japanese Centre in London's Warwick Street) and I for one took the advice and sought out the place to discover the comics for myself. 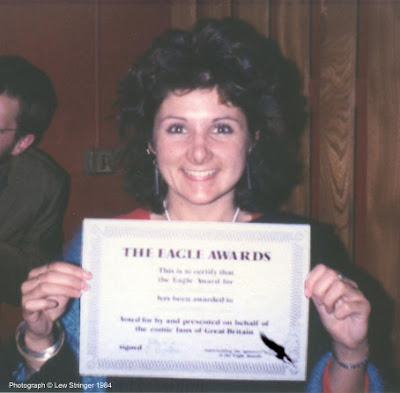 This entertaining mixture of strips and features earned The Daredevils an Eagle Award at a convention in Birmingham in 1984 (there's Bernie Jaye beaming with it above). Unfortunately quality doesn't always receive the attention it deserves and falling sales meant the comic was canceled with issue 11, merging into Mighty World of Marvel. However, it was a title that all who worked on it were proud of, and I feel honoured that it was the first comic I freelanced for. A pleasing start to a career.

Incidentally, by coincidence, 25 years on, I'm freelancing for Marvel UK again now, - or rather Panini as they are today. My Mini Marvels strips from Rampage of two years ago are currently being reprinted in Spectacular Spider-Man (another Eagle Award winning title!) and I've just been commissioned to create new ones for the comic. Here's a preview of a panel from one of the upcoming Mini Marvels below: 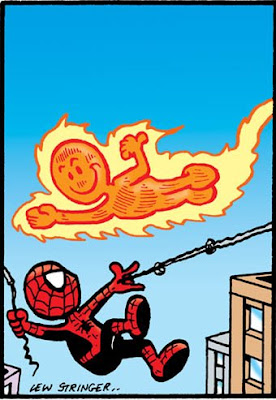 Never realised that was your first - I actually remember the gag strip. The 12 year old me thought it was pretty good as my far older self remembers.

But Daredevils was just a great magazine and just didn't deserve the early retirement it was afforded. I had a crack at describing exactly why here: http://forbiddenplanet.co.uk/blog/?p=7739

& Lew, whilst I think about it, you've been snapping pictures longer than a lot of us at these things - would it be possible to get some of the photos up on Flickr as some sort of Comics UK reference thingy?

That's a good idea Richard. I'm going to put some old Con pics up here soon but a Flickr page would be good too.

Looks like I was born a year and a half too late! (Probably a bit more actually, given that I wouldn't have been able to appreciate such a fine looking product at the age of 1!)

When I last saw Bernie -- um, 21 years ago? -- she had a beautiful painting of all the CAPTAIN BRITAIN characters standing around her, gifted to her, of course, by the ever generous Alan Davis.

I have fond memories of DAREDEVILS, which I started buying from the newsagent on the seafront in Weymouth when I was at college there. It brought me back to buying Marvel UK titles again which ultimately led me to my job there three years later. I daresay it's the reason I always felt a Marvel UK title HAD to have a Lew Stringer strip inside.

Or an Image title for that matter! : )

Cheers Rich. Happy days. My only regret is I didn't visit the Marvel offices more often.

End of the month!

Sigh... I've come over all nostalgic after reading your post about Daredevils, not something I'm usually prone to. Nice :-)