No more Classics from D.C. Thomson 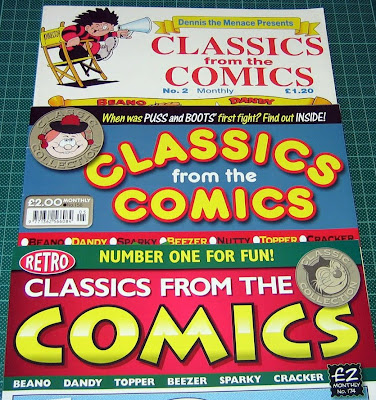 News just in: The reprint monthly Classics from the Comics is to cease publication with issue 175, out on October 13th.

Launched in April 1996, Classics from the Comics was a 68 page black and white value-for-money title which reprinted selected strips from the rich history of Thomson humour comics. It provided an affordable way for collectors to revisit their favourite characters and for new readers to discover the fantastic work of artists no longer with us or retired.

Recent issues, edited by Garry Fraser, had seen Classics embrace its potential even more. A bright new logo debuted, and an expansion of contents included features on artists (somewhat of a miracle considering how secretive Thomson used to be), and reprints from boys papers such as Victor and Hotspur. Even text stories, unseen for years, were revived, with a 1958 Dixon Hawke mystery appearing in the current issue.

Sadly all this was an uphill struggle against the one thing Classics has suffered from for years: poor distribution. Very few newsagents seemed to stock the comic, so a portion of the potential market simply wasn't aware of its existence. (Only one of my local newsagents stocked it, where I purchased it every month, then they suddenly canceled their order for no apparent reason about six months ago. If this was the pattern across the country it's easy to see why sales were low.)

Even though it was only a reprint comic it was keeping those old characters in print, but the cancellation of Classics now means that many of those characters will now fade into history. At present there are no plans whatsoever to replace it with another reprint title.

The latest issue of Classics from the Comics came out yesterday (previewed here) and features an interview with veteran Minnie the Minx artist Jim Petrie. The final edition will be out next month on October 13th.
Posted by Lew Stringer at 17:09

Oh no, what a terrible shame. I discovered this magazine when I was in Heathrow over 10 years ago. I'm an American, and even though I didn't grow up with these comics, I enjoyed them as if I had. Is there any other publication doing old reprints?

Thomsons publish an annual reprinting classic Dandy and Beano strips, the latest of which is "Heroes - Classic fun from the 1980s" and they also have a book reprinting old Bunty strips out now, but no regular comic doing reprints.

I'm very surprised..as it has got so much more interesting and better recently..

I will miss this greatly..

That's a real shame.. I had only recently subscribed to this as well. It's such a shame these characters, like you say will fade into history.
I have zero interest in the modern interpretations of the characters (Desperate Dan looks AWFUL). At least we had Classics to fall back on. Again, such a shame :o(

Personally I think Jamie Smart's new Desperate Dan is great, and the funniest it's been since the days of Dudley Watkins. Each to his own though of course. :)

If the end of Classics teaches us anything it's that comics have to evolve to survive. Seems that kids didn't care for the older material, although I still think bad circulation was the main problem.

The best we can hope for are more books like this year's Black Bob one and the forthcoming Best of Victor. - And to keep interest in the old strips alive with our blogs.

Well that's a real shame although I'm far from surprised.

I always have a look for it but haven't seen a copy on a shelf for about 3 years.

Just goes to show how near impossible it is for a comic to survive without being bagged with a pile of unwanted plastic landfill tat.

If shops refuse to stock comics that don't fulfill that criteria then maybe the future of comics really is online, iPads etc. Hmm never thought I'd say that.

Bad circulation is true, I also only knew of one stockist. However, they had ten unsold copies on Monday, two days before the latest issue came out, so if even the places that do sell it aren't shifting copies...

I'm very disappointed at this news. :(

What you say makes a lot of sense Lew... comics do need to evolve to keep going (says me, still stuck in the 70's Marvel style!!). I'm just a stickler for the versions of the characters I grew up with... no disrespect to the artists drawing the characters today, as I'm sure they are all very talented - I just prefer the classic versions :o)

I didn't know this existed until reading about it's imminent demise here... I've been looking at a lot of British comics from my youth (and my older brother's... it was often his comics collection that was more interesting to me as a kid) recently and wishing somebody was compiling them

Online comics are all very well and perhaps it's just a mark of my age but it's the physical appeal of a comic that I crave (I expect that puts me in the minority), I simply don't enjoy looking at comics online

There's so many British comics artists I'd love to see collected individually in book form... a Leo Baxendale treasury, for example... is the market for this type of book so limited?

I do not bloody believe it!

After reading about it laces like here and Down The Tubes, and after finally getting paid from my new job, I finally got round to signing up to a subscription to Classics - TODAY!

I hope I haven't jinxed Commando as well...

I myself am not surprised CftC had to finish. Some unscrupulous fans were posting up files of each issue on certain websites and other Brit comics. Kids today would rather steal than pay. F@kkn pirates killed our comics. :(

They're narrow-minded idiots with a warped sense of entitlement. I've heard all the excuses: "I can't afford to buy them", "I don't have room to store them", "It's sharing, not stealing" etc. Yeah, right.